Jump to content
The printable version is no longer supported and may have rendering errors. Please update your browser bookmarks and please use the default browser print function instead.
Welcome to
WikiShia
An online encyclopedia of the school of Ahl al-Bayt (a), affiliated with the Ahl al-Bayt World Assembly.
4,163 articles in English.
About WikiShia • Policies and Guidelines • List of Pages

Featured Article
The Battle of Karbala or Battle of 'Ashura in which Imam al-Husayn's (a) fought against an army from Kufa on Muharram 10, 61/October 10, 680 who were mercenary soldiers of Yazid b. Mu'awiya, the second Umayyad caliph. The Battle of Karbala is the most sorrowful incident in the history of Islam, especially for the Shiites. hence they hold huge mourning ceremonies every year during the first (10) days of Muharram.

Imam al-Husayn (a) stayed in Mecca for about four months until Dhu l-Hijja 8/September 12. During his staying in Mecca, he (a) received invitation letters sent by the people of Kufa. Since the possibility of being killed in Mecca by the agents of Yazid and invitations by the people of Kufa, Imam (a) moved towards this city; however, before arriving in Kufa, he (a) was informed that the people of Kufa had broken their promise to support him and that Muslim b. 'Aqil, who was sent by Imam al-Husayn (a) to Kufa to investigate the situation- had been martyred . After Hurr b. Yazid al-Riyahi blocked the way of Imam (a), he (a) went toward Karbala and there he (a) encountered the army of 'Umar b. Sa'd who was appointed by 'Ubayd Allah b. Ziyad as the commander of the army.

Two armies confronted on 10th of Muharram best known as the Day of 'Ashura'. On this battle, Imam al-Husayn (a), his brother, 'Abbas b. 'Ali (a), the former's son, 'Ali Asghar, 17 members of Banu Hashim clan, along with more than fifty companions of Imam al-Husayn (a) were martyred. Some maqtal writers have mentioned Shimr b. Dhi l-Jawshan as the murderer of Imam al-Husayn (a). A group of soldiers from the army of 'Umar b. Sa'd ran over the bodies of martyrs with their horses. In the evening, this army attacked the tents of the families of the martyrs and set them on fire. This night is called "Sham-i Ghariban" in persian. Imam al-Sajjad (a) was not involved in the fight due to his sickness, so survived. He was captured by the army of Yazid along with Lady Zaynab (a) and other women and children. The army lifted the heads of the martyrs onto spears and took thems along with the captives to 'Ubayd Allah b. Ziyad in Kufa and from there to Yazid in Damascus.Read more... 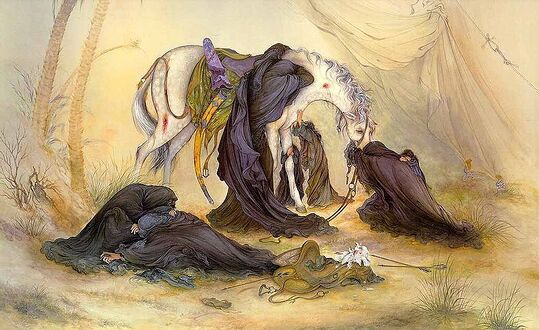 "The Evening of 'Ashura" painted by Mahmud Farshchiyan, Iranian artist