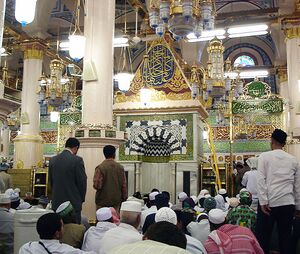 Miḥrāb (Arabic: محراب) is a prayer niche usually built in mosques to show the direction of the qibla, and Imam al-jama'a (Imam of the prayer) stands in front of it. Mihrab, in its present form, did not exist in early Islamic period. It is a replacement for early stones or signs indicating the direction of Qibla. Some rulings about mihrab are mentioned in jurisprudential books.

Lexicologists have mentioned various meanings for Mihrab: the best position in a meeting or in a room or in a mosque. Some said that the word Mihrab is derived from Harb— meaning battle— and means the place of the battle between the human and the Satan. However, Raghib al-Isfahani said that Mihrab is taken from the phrase Mihrab al-Bayt, which means the best place in the house.

Technically speaking, it is a niche built in a mosque toward the Qibla.

The word Mihrab is mentioned four times in the Qur'an and once in its plural form—Maharib, while it means the place of prayer, place of worship or house. Moreover, in some Shi'a jurisprudential books, there are some discussions regarding Mihrab in the chapters related to mosque's rulings. During these discussions, the hadiths concerning Mihrab are mentioned.

Before the emergence of Islam, the word Mihrab was used in some religions to indicate a certain kind of religious building. In Mithraism (in Persia and Mesopotamia) the temples were called Mihraba or Mihrkada. Moreover, there is a semicircular niche at the front part of churches which is very similar to Mihrab.

It is said that the first Mihrab in Islam, which was like a shelf in the wall, was built in 86/705 during the renovation of al-Masjid al-Nabawi, by Umar b. Abd al-Aziz, the governor of Medina, during the reign of Walid b. Abd al-Malik. Some scholars said that this shelf was probably a substitute for a door-like sign which showed the direction of the Qibla. According to some sources, a stone plate showed the place where the Prophet (s) stood for leading Salat al-Jama'a (congregational prayer).

Ibn Battuta sees that the first Mihrab in Islam was built during the caliphate of Uthman b. Affan; however, he mentions that some suggest it was built by Marwan, and some say it was built by Umar b. Abd al-Aziz.

Mihrab is a typical part of Islamic architecture. Tile-work, stucco, and calligraphy that present the verses of the Qur'an and hadiths are used to decorate a Mihrab.

In jurisprudential sources, the rulings regarding Mihrab are mostly discussed in chapters that contain rulings about mosque or congregational prayer. Some Shi'a faqihs, such as al-Shaykh al-Tusi, Ibn Idris and Sayyid Yazdi said that building a Mihrab in the wall of a Masjid is Makruh (disliked); however, al-Shaykh al-Tusi asserted that it is not forbidden. The evidence for this ruling is a hadith in which Mihrab is likened to altars used by Jews for offering a sacrifice, the hadith states when you see a Mihrab in a mosque, you shall destroy it.