Muḥammad Taqī Bāfqī (Persian: محمد تقی بافقی) was a religious scholar, who is famous for his public opposition to Reza Khan.

His father was a businessman named Hajj Muhammad Baqir. He was born in 1292/1875 in Bafq, a small town near Yazd, Iran.

He started his religious education when he was 14 in Yazd. He studied fiqh and usul under Mirza Sayyid 'Ali Lab Khandaqi. In 1320/1902 he headed to Najaf, where he studied for 17 years under teachers like: Mulla Muhammad Kazim Khurasani, Sayyid Muhammad Kazim Yazdi, and Mirza Husayn Nuri. After that, he went to Karbala and studied under al-Sayyid Ahmad al-Musawi al-Karbala'i who was his moral master as well. In 1336/1918 or 1337/1919 he returned to Iran and settled in Qom. He and two great scholars of Qom, Ayatullah Kabir and Ayatullah Fayd helped revive the Islamic seminary of Qom.

Cooperation in Foundation of Islamic Seminary of Qom

By arrival of Shaykh 'Abd al-Karim Ha'iri, these efforts led to foundation of Islamic seminary of Qom. Some of the scholars in Qom including Bafqi encouraged Ayatullah Ha'iri to stay in Qom and dedicate himself to revive the seminary of Qom. Bafqi became the chief assistant of Ayatullah Ha'iri and was responsible for providing cloths for seminarians, who were increasing in number daily. He also performed congregational prayer whenever Ayatullah Ha'iri was absent. Additionally he supervised the construction process of three mosques and sometimes he helped the construction workers.

His serious effort in enjoining good and forbidding wrong influenced the people's life very much. Regarding this, he convinced the barbers of Qom not to shave beards. Once, the government wanted to stop him and other scholars from these actions, but when they faced his blunt answer in which he had compared Reza Khan with Pharaohs; they temporary left the subject. Bafqi did not see the oral admonition enough, so he wrote several letters to Reza Khan and asked him to change the policies which oppose Islam.

His conflict with Reza Khan reached its top in Ramadan 1346 (March 1928). In this year Reza Khan's wife and other women from the court entered the holy shrine of Lady Ma'suma (a) for attending in Nuruz ceremony in 28th of Ramadan 1346 (March 20th 1928). They sat in the room above the mirror porch in the holy shrine without chador. When Bafqi knew that, he sent a message for the women and criticized them, but, because it did not work, he appeared in person at the holy shrine and asked them to leave the shrine.

Reza Khan's family reported the incident to Tehran. Immediately, Reza Khan along with a military troop headed to Qom. The military troop camped in Manzariyyah, near Qom, while Reza Khan, accompanied by some guards, entered Qom. Reza Khan disrespectfully entered the holy shrine with his boots, and his guards beat some people and arrested Bafqi. The absence of Ayatullah Ha'iri made Reza Khan so bold as to do this. Reza Khan put Bafqi under his feet, cursed him and sent him to Tehran prison.

After some months Bafqi was released by the effort of Ayatullah Ha'iri, but exiled to Ray. In the holy shrine of 'Adb al-'Azim (a), he performed congregational prayers and people referred to him to get their religious inquiries answered. He was popular among people for his piety, honesty, and assistance to people. Eventually, he could travel to Mashhad in 1314/1896.

By deposition of Reza Khan in 1320/1902 he returned from exile to Qom. In the short time that he was in Qom, he prevented bars from opening in the town. 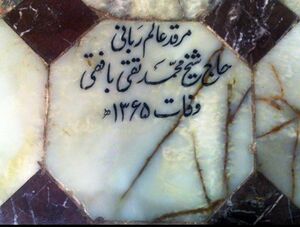 His Grave in Holy Shrine of Lady Ma'suma (a)

After Qom, he traveled to the holy cities in Iraq and stayed there for a year; then he returned and passed last years of his life in Ray. He passed away in 5th of Ramadan 1365 (August 3, 1946) and was buried near the tomb of Ayatullah Ha'iri in Qom.

In the Eyes of Scholars

Some scholars believe that Bafqi's extreme reaction to the presence of uncovered women in the holy shrine of Lady Ma'suma (a), in 1307/1890, was the reason of 8-year delay in enforcement of kashf-e hijab (unveiling hijab) law. Mahdi Quli Hidayat has written in his notes about kashf-e hijab that in 1306/1889 and 1307 the Queen encouraged the idea of unveiling hijab but Reza Khan's firm decision for passing a law on that, was made after his visit to Turkey in 1313/1895. Generally, Bafqi's courage to face Reza Khan, influenced Qom seminary very much; to the point that Imam Khomeini introduced him as an example that should be the role model, in his moral class which was held in Qom in 1310s/1890s.