Ṣulḥ al-Ḥasan (a) (Arabic: صُلحُ الحَسَن) is a book concerning the peace treaty of Imam al-Hasan (a) written by al-Shaykh Radi Al Yasin, the Shi'a researcher and scholar. The book is one of the few analytic and elaborated works written about the life of Imam al-Hasan (a), his political position, and the conditions of his peace treaty with Mu'awiya b. Abi Sufyan. The book is translated into Persian by Ayatollah Sayyid Ali Khamenei.

Al-Shaykh Radi Al Yasin was the son of al-Shaykh Abd al-Husayn b. al-Shaykh Baqir. He was a scholar and historian in Najaf. He was born in 1314/1896 and died on Dhu l-Qa'da 15, 1372/ July 27, 1953. In addition to a collection of poems, he wrote a book entitled Tarikh al-Kazimiyya fi l-qadim wa l-hadith (a history of Kadhimiya in ancient and modern times) and Awj al-balagha concerning sermons by Imam al-Hasan (a) and Imam al-Husayn (a).[1]

The author dealt more with analyses of historical circumstances from his own point of view, rather than citing historical reports. However, he carefully referenced and appealed to various historical sources both within the text and in footnotes.[2]

Contents of the Book

The book consists of three parts. The first part provides a brief biography of Imam al-Hasan (a). The second is concerned with people's allegiance to him and the conditions of his army. The last part, which is the main part of the book, is concerned with his peace treaty and factors leading to it. 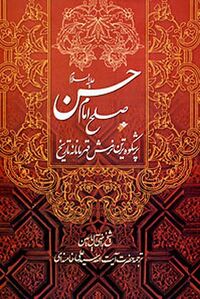 The epilogue of the book contains an account of a comparison between the conditions of Imam al-Hasan's (a) peace treaty and Imam al-Husayn's (a) uprising both with respect to their friends and companions and their enemies.[3]

The Translation of the Book

The book was translated into Persian in 1388/1969 by Ayatollah Khamenei as Imam al-Hasan's (a) peace treaty: the most splendid heroic leniency of the history.[4] In the preface of the book, Ayatollah Khamenei wrote that he had intended to write a book about Imam al-Hasan's (a) peace treaty, but the values and advantages of this book dissuaded him from doing so, and thus, he started translating this book.[5]