Ibn Saba' was first mentioned by al-Tabari in his Tarikh al-umam wa l-muluk. Many Shi'a and Sunni scholars have cast doubts on the source appealed to by al-Tabari regarding Ibn Saba'.

Some Sunni historical sources have introduced Ibn Saba' as the founder of Shiism. Some researchers consider him as a ghali (a person who exaggerates about Imams) who was cursed by Ahl al-Bayt (a). According to some studies, this is a fictional character which never existed; in fact, it was fabricated by enemies of Shiism.

From Denial to Affirmation

The variety of views about Ibn Saba' ranges from affirming his existence and his vital roles in the history of Islam to the denial of the existence of such a character. In general, historical studies about the character of 'Abd Allah b. Saba' lead to the following conclusions.

Important older sources of the Islamic history, such as al-Tabaqat al-kubra by Ibn Sa'd (168/784-5-230/844-5) and Ansab al-ashraf by al-Baladhuri (d. 279/892-3), do not mention 'Abd Allah b. Saba' in their accounts of the events in the period of 'Uthman b. 'Affan's caliphate and his murder. In fact, such a character is not mentioned in these sources at all.[1] The only reference to "'Abd Allah" in these sources is taken by some people to refer to 'Abd Allah b. Wahb al-Rasibi.[2]

Some historians, mainly Sunni scholars, take 'Abd Allah b. Saba' to be the founder of Shiism who played crucial historical roles, including in the murder of 'Uthman and prevention of a dialogue between 'Ali (a) and Aisha during the Battle of Jamal. The theory was first propounded by al-Tabari on the basis of a report by a person called "Sayf b. 'Umar".[3] All subsequent sources of this theory appeal to al-Tabari's view and its source.

Cursed by Ahl al-Bayt (a)

Many historians and scholars of rijal consider 'Abd Allah b. Saba' to be a ghali who exaggerated about the character of Imam 'Ali (a) and identified him with God. Thus, he was cursed by Shiite Imams.[4] The source of this view is al-Kashshi who was followed by most of the Shiite scholars.[5] Some Sunni scholars[6] and western researchers of Islam[7] have confirmed such a view about Ibn Saba'.

Some later scholars believe that no such a person as 'Abd Allah b. Saba' ever existed, and in fact, it was fabricated by people such as Sayf b. 'Umar. They have appealed to historical sources and principles of rijal to support their view. The view was propounded most famously by 'Allama Tabataba'i, 'Allama 'Askari, and Dr. Taha Hussein.[8]

In his Wu''az al-salatin, Dr. Ali al-Wardi, an Arab scholar, has supported the view that no such a person as 'Abd Allah b. Saba' ever existed and claimed, moreover, that most of the features attributed to 'Abd Allah b. Saba' in al-Tabari's Tarikh (history) and the like apply to 'Ammar b. Yasir, the loyal companion of the Prophet Muhammad (s) and Imam 'Ali (a). He could thus be considered as the leader of Saba'is, or he could be identified with 'Abd Allah b. Saba'.[9] Similarities between 'Ammar b. Yasir and 'Abd Allah b. Saba' as mentioned in Sunni sources include their both being known as "Ibn al-Sawda'" (son of a black mother), love of 'Ali (a), calling people to pledge their allegiance to 'Ali (a), and the active role in the Battle of Jamal.[10]

According to what al-Tabari and his followers have cited, 'Abd Allah b. Saba' was a Jew from Sana'a and his mother was black (Sawda'). He converted to Islam in the period of the third caliph. He believed that the Prophet Muhammad (s) will return to this world, just as Jesus will. He believed that every prophet had a successor and 'Ali (a) was the successor of the Prophet Muhammad (s) and the last successor. According to him, 'Uthman usurped 'Ali's (a) right and was unjust to him. Thus, the Islamic nation was, he believed, obliged to rise and remove 'Uthman from power and return the government to 'Ali (a).

In order to propagate his beliefs, the story goes, Ibn Saba' travelled to different Islamic cities and lands such as Kufa, Syria, Egypt, and Basra. Some companions of the Prophet (s) were "deceived" by him and supported his views, including Abu Dhar, 'Ammar b. Yasir, Muhammad b. Abi Hudhayfa, 'Abd al-Rahman b. 'Udays, Muhammad b. Abi Bakr, Sa'sa'a b. Sawhan al-'Abdi, and Malik al-Ashtar. His beliefs became so widespread that 'Uthman had to commission some of the Sahaba to go to different cities to prevent the sedition. As a result of Ibn Saba's provocations, an uprising against the caliph began which led to 'Uthman's murder.

Ibn Saba' allegedly had propagators in different cities who called people to enjoin the right and forbid the wrong (al-amr bi-l-ma'ruf wa l-nahy 'an al-munkar). They were significantly involved in the battles of Jamal and Siffin.[11]

Of sources in which 'Abd Allah b. Saba' is mentioned, the main references consist in al-Tabari's Tarikh (history) among Sunni scholars and Rijal al-Kashshi among Shiite scholars.

Among later scholars, people such as Rashid Rida in his al-Shi'a wa l-Sunna[15] and Ali Sami al-Nashshar[16] have endorsed the existence of Ibn Saba'.

Some scholars, such as al-Dhahabi (d. 748/1347-8), have claimed that there is a consensus among Sunni scholars with regard to the unreliability of Sayf's hadiths.[22]

'Allama 'Askari rejected hadiths in Rijal al-Kashshi regarding Ibn Saba' for a number of reasons: 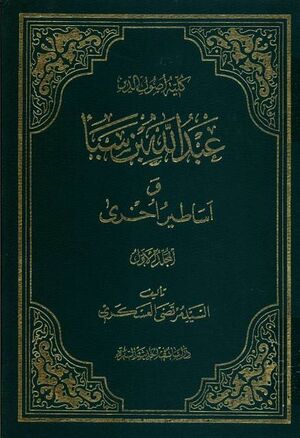