Annemarie Schimmel (b. 1922 - d. 2003) was a German scholar of Islamic studies and mysticism and an Orientalist, who was interested in Islam and wrote several works on Islamic theology, mysticism, and culture in different languages. She believed that the picture of Islam, Muslims, and the Prophet (s) offered in Medieval Europe was distorted. She criticized the book Satanic Verses. Despite her sympathy with Muslims, some experts hold that not all of her interpretations of Islam and Shiism are right. Her works have attracted the attention of Muslims and tributes were held for her.

Annemarie Schimmel was born on April 7, 1922 in Erfurt, Germany, to a Protestant family. Since childhood, she was interested in the Oriental world and Islam, and she was only fifteen when she learned Arabic and memorized part of the Quran. A few years later, she learned Persian and Turkish. At the age of 19, Schimmel graduated from the University of Berlin with a degree in Eastern languages and Islamic art. In 1951, she obtained her PhD in the history of religions from the University of Marburg. 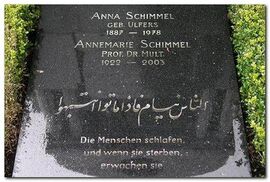 The gravestone of Annemarie Schimmel

In 1952, Schimmel went to Turkey, where she chaired the department of history and principles of religions in the Faculty of Theology in Ankara. In 1965, she was appointed as the chair of the Indian Islamic culture in Harvard University. For years, she taught Islamic theology, history of religions, and Sufism in universities in Germany, Turkey, and the US. Schimmel knew German, English, Turkish, Arabic, Persian, French, and Urdu, and published works in some of these languages. She died on January 26, 2003 and was buried in Bonn, Germany, where nearly seven hundred Muslims and Christians from around the world attended her funeral. The following epitaph is inscribed on her gravestone in Arabic Nastaliq calligraphy:

“people are asleep, they wake up when they die.”

This aphorism is attributed to the Prophet (s) or Imam ʿAli (a).

On the Distorted Picture of Islam and Shiism

Annemarie Schimmel believed that the picture of Islam, Muslims, and the Prophet (s) in Medieval Europe was distorted. She held that her conception of Islam and the culture of Muslims was different from that of other Orientalists, because she had visited Muslim villages, had interactions with Muslims, and acquired a great deal of first-hand information. In defense of Shiism, she said that, contrary to claims made against Shias, they do not call into question the validity of the Prophet’s tradition, words, and deeds. Indeed, they endorse the Prophet’s tradition more than Sunni Muslims do.

Annemarie Schimmel maintained that the best way to understand Islam is the phenomenological attitude as the only method to pinpoint what is common to all religions. In her studies of Islamic sects, she adopted the method of researchers such as Henry Corbin in that she relied on classic works of prominent figures in those sects. In some of her works, however, Schimmel drew on oral traditions and her own observations of the practices common among Muslims.

When the fatwa against Salman Rushdie was issued, Annemarie Schimmel criticized him and his book Satanic Verses. She believed that the book hurt the feelings of Muslims. As a consequence, she was harshly reproached by opponents of Imam Khomeini’s fatwa and some even accused her of being an agent of the Islamic Republic of Iran. She said: “I criticize and condemn these remarks until my death. Radicals associated with Salman Rushdie cannot frighten me. The Prophet’s character is not properly known in the West.”

Of course, she did not endorse Imam Khomeini’s fatwa calling for Rushdie’s death.

Criticism of the Book Not Without My Daughter

Annemarie Schimmel harshly criticized the book Not Without My Daughter by Betty Mahmudi. The book narrates and reproaches the Islamic-Iranian culture. It was widely circulated in Europe and the US and depicted a humiliating picture of Iran. She rejected the content of that book based on her familiarity with, and love for, the Iranian culture and literature. She said that the West had doubled down its cruel propaganda against the East and Islam and that as an Orientalist she was committed to defend the Eastern culture and defend the truth about it.

Annemarie Schimmel was interested in mysticism and Sufism since her childhood, which is why it turned into the most central topic of her research. As she herself puts it, she dedicated her life to Sufism. Muhammad Iqbal and Rumi (Mawlawi) were two great influences on Schimmel, whom she knew since her youth. She wrote several works about them and cited their ideas in the rest of her works.

Critiques of Schimmel’s Conception of Shiism

In part of her Islam: an Introduction, Annemarie Schimmel provides a summary of the history and doctrines of Islam, where she recapitulates the history, branches, and beliefs of Shiism. Some of her remarks there do not correspond to the standard Shiite doctrines. She does not attribute the early formation of Shiite theology to Imam ʿAli (a) and his sons, al-Hasan (a) and al-Husayn (a). Instead, she believes that central to Shiite beliefs was Muhammad b. Hanafiyya.

Some people point out that Annemarie Schimmel sometimes relies on unreliable sources in her account of religions and denominations, such as oral traditions she personally heard in certain religious assemblies. She sometimes confuses Muslim etiquettes and practices with religious rules and canonic laws. For instance, she says that women are banned from entering religious mausoleums during their pregnancy or horses decorated on the Day of Ashura as Dhu l-Janah are symbols of Imam al-Mahdi’s white horse.

In her account of eschatological myths in the Quran, as sources of certain stories, Schimmel says that some ideas around Imam al-Mahdi (a) are mythical in nature. In her view, these ideas arose as a result of psychological factors as well as individual and collective legends.

Two tributes were held for Annemarie Schimmel in Iran: once in 2001 in the University of Tehran and once again in 2002 in the sixteenth Tehran International Book Fair.

During her academic life, Schimmel received many rewards, including:

Some critics believe that, through her works, Annemarie Schimmel tried to create a hospitable environment for exchanges between Oriental and Occidental scholars and intellectuals. She always stressed the need for avoiding gratuitous prejudices. She published over one hundred books, articles, translations, reports, interviews, and prefaces, the exact number of which is not even known by her. 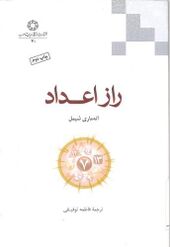 The following are some of her major works: