Fatwā (Arabic: فتوا) is the opinion of a mujtahid or a marja' on religious obligation of mukallaf people deduced from the four sources of argument (the Qur'an, conduct of the Prophet (s), consensus of jurists and intellect). According to the view of Shia jurists, a person who issues fatwa should be just, Twelver Shi'i, a'lam (the most learned mujtahid), of legitimate birth and familiar with the ways and sciences necessary for deduction of rulings.

Fatwa is usually expressed with the terms: wajib (obligatory), haram (prohibited), makruh (disliked), mustahabb (recommended) and mubah (permissible). Sometimes for stating the fatwa, the following expressions are used: “aqwa an ast…” (“It is more strongly believed that…”), “bana bar aqwa…” (“based on a stronger view…”) and “azhar an ast…” (“It is more obvious that…”). Among the ways to access the fatwa of a mujtahid is to hear it from the mufti, being informed of by two just persons or one trustable person whose report brings about certainty as well as finding it in the mujtahid's manual of religious rulings.

About the difference between fatwa and hukm (ruling), it is mentioned that fatwa is the general ruling for the majority of the followers of the mujtahid; but, hukm (ruling) is the ruler's order for doing or abandoning a certain action and is obligatory for all the people addressed by the order.

In jurisprudential references, the rulings regarding fatwa are discussed in the chapter of ijtihad and taqlid.

Difference between Fatwa and Hukm [Ruling]

Jurists have mentioned some differences between fatwa and hukm including:

Qualifications of a Mufti

Different qualifications have been mentioned for a mufti, including maturity, sanity, justice, being Twelver Shi'i, a'lam (the most learned mujtahid) and of legitimate birth. Also, a mufti should know the ways of acquiring religious rulings and deduction of rulings as well as all sciences involved in deduction of rulings. He should also be able to bring arguments for rulings and explain their principles. Therefore, a mufti should be knowledgeable about the Qur'an and tradition. He should also know about the abrogating and the abrogated, the general and specific, the absolute and the specified and the real and metaphoric verses.

Some of the rulings related with fatwa are as follows:

A mufti is allowed to issue fatwa only when he is certain that he has full competence over whatever involved in deduction of the rulings.

Some famous fatwas of Shia jurists are as follows: 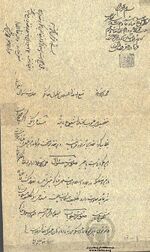 The Fatwa on the Ban of Tobacco

The Fatwa on the Ban of Tobacco

“In the Name of God, the All Compassionate, the Most Merciful.
Today, the use of tobacco in any way is considered as war against the Imam al-Mahdi (a).”

Fatwas, which are against the common view, are called shadhdh (lit. “Bizarre”) fatwa or “tafarrud al-fatwa” (“isolated fatwa”). Some of such fatwas are as below:

Fatwa council is following a group of jurists instead of one certain jurist. In this method, the view of the majority is followed, since no consensus is possible among the jurists in all issues.

According to the advocates of this method, studying the arguments for the validity of fatwa and the necessity of following a mujtahid shows that the criteria for Shar'i validation of argument exist both in individual and council fatwa. However, this theory has been criticized by some researchers.

A group of mujtahids, who study about one religious issue and give council to the marja' on that issue, is called istifta' council. In answering his followers, the marja' gives his opinion to the members of the council and they give their opinion if they have any idea for perfecting that fatwa, and finally, organizing, explaining and concluding the points for giving the fatwa is upon the marja'.