From WikiShia
(Redirected from Evil eye)
Jump to: navigation, search

Evil Eye is a damage to humans or other beings thought to be caused by being looked at by a person. The notion does not explicitly occur in the Qur'an, but the majority of Quranic exegetes believe that Wa In Yakad Verse was revealed about the evil eye. There are hadiths which are explicit about the reality of evil eyes, providing recommendations for protection against them, including the recitation of al-Mu'awwidhatayn, Qur'an 2 (sura al-Baqara), al-Kursi Verse and Wa In Yakad Verse.

The evil eye is a damage to a human person or other animals and objects thought to be caused by being looked at by some evil-eyed person.[1] The evil eye is a non-volitional state arising from a feeling of envy for a person's happiness, success, beauty, admiration, and the like. Some people believe that the evil eye is an effect of one's psychological faculties.[2] The evil eye is closely tied to envy, and in some hadiths, envy is said to be the origin of evil eyes. [3]According to al-Allama al-Majlisi, some exegetes of the Qur'an take the verse 5 of Qur'an 113 [4] in which the envy of envious people is mentioned to be about evil eyes.[5]

The Reality of Evil Eye

There is no explicit word in the Qur'an which means evil eye, but many exegetes of the Qur'an take the verse Qur'an 68:51,

to imply the existence of evil eyes.[6] With regard to the occasion of the revelation of this verse, it is said that polytheists had asked an evil-eyed man to cast an evil eye on the Prophet (s). When the man decided to do so, Jabra'il (Gabriel) revealed Wa In Yakad Verse, thereby protecting the Prophet (s) from the evil eye. However, there are other exegetes who do not take the verb, "izlaq", to be meant "to have an evil eye", taking it, instead, to mean to look at someone with hostility and harshness. They say that in this verse, the word is used in this meaning.[7]

Some exegetes of the Qur'an take the verse 67 of Qur'an 12 [8] to be concerned with the evil eye. In their exegesis of the verse, "And he said, 'My sons, do not enter by one gate, but enter by separate gates", they say that since the Prophet Jacob (a)'s sons were handsome, numerous, and strong, he recommended them to enter Egypt from different gates lest they are hit by an evil eye.[9] However, al-Shaykh al-Tusi has pointed to other exegetic accounts of the verse provided by those who deny the evil eye in the Qur'an. They propose other possible accounts such as the fear from being hurt by governmental agents.[10] Ayatullah Ma'rifat appealed to the next verse in which it is said that "it (that is, Jacob's (a) plan) did not avail" (or did not work), in order to show that Jacob's (a) recommendation was not concerned with evil eyes.[11]

According to hadiths cited in both Shiite and Sunni sources, evil eyes are real. There is a hadith that says, "If something could overcome the predestination, it would be the evil eye."[12] Hadiths from Shiite Imams (a) have also been explicit on its reality and have proposed ways to protect one against it.[13]

In his Sharh al-isharat, Nasir al-Din al-Tusi says that Ibn Sina believed that evil eyes were not certain (rather they only probably existed).[14] But Mulla Sadra maintained that some souls come to a degree of power in their "estimative faculty" (al-quwwa al-wahmiyya) that they can exert their influence on external matters, and evil eyes are of this category.[15] Also, there are some scientists who believe that there is a magnetic force in the eye that can be strengthened through training.

Template:Mian Some people take the idea of evil eyes to be contrary to the doctrine of predestination (al-qada' wa l-qadar) and trust in God.[16] This has led to questions and answers with regard to evil eyes.[17] According to Shiite scholars, evil eye does not contradict the divine Power, because what has the influence is God's Power, not such factors. Also, the hadith in which the effect of evil eye is taken to be equal to the predestination is taken to be exaggerative.[18] Such a conception is rooted in hadiths in which the evil eye is confirmed; hadiths such as "an evil eye can lead a man to the grave and a camel to the furnace"[19] and "if graves are dug, you will see that most of the dead had died because of an evil eye".[20]

There is no discussion of the evil eye in Shiite jurisprudential books, and no jurisprudential rulings have been inferred from hadiths in this regard. However, it is said that in some areas in North Africa, if it is proved that a famously evil-eyed person damages someone or something with his or her evil eye, then they will have to compensate for the losses. It is also said that some Sunni jurists issued rulings on famously evil-eyed people, such as preventing them from interacting with people, keeping them in their homes, and allocating an allowance for them from the public treasury.[21]

Protection from the Evil Eye 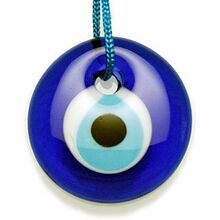 A ta'widh for evil eye.

Ta'widh and hirz are used for protection against the evil eye. In supplications transmitted from Shiite Imams (a), they asked God to protect them from the evil eye. Imam al-Sajjad (a) asked this from God in the 23rd supplication of al-Sahifa al-Sajjadiyya.

Shiite hadiths have recommended the recitation of al-Mu'awwidhatayn, al-Kursi Verse and Wa In Yakad Verse for protection against evil eyes. According to a hadith from the Imam al-Rida (a), the recitation of Qur'an 2 (sura al-Baqara) and al-Mu'awwidhatayn is recommended for neutralizing the effect of an evil eye.[22] Imam al-Rida (a) was quoted as saying that a written form of Qur'an 1 (Sura al-Hamd), al-Mu'awwidhatayn, and al-Kursi Verse should be put in a glass contained for protection against evil eyes.[23]

Also, Shiite Imams (a) are quoted as saying that it is recommended to mention God whenever something makes you wonder; for example, say dhikrs such as Takbir, Hawqala, and [[Ma Sha' Allah].[24]

Supplication for Neutralizing the Effect of an Evil Eye

In some books, certain supplications are cited for protection from evil eye,[25] such as: 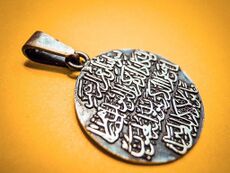 A necklace of Wa In Yakad

There are different ways to neutralize the effect of evil eye in different cultures. In some Asian areas, it is widely believed that burning peganum harmala (esfand or aspand) and breaking egg are good for counteracting evil eyes.[27] However, there is nothing in religious sources to confirm such practices; thus, some people take it to be superstitious. Also, blue beads are used as bracelets, necklaces, or adornments hanging from walls and the like in order to protect one against evil eye, but according to fatwas of some marja's, there is no jurisprudential evidence for this practice.

Evil Eyes in Other Religions

Followers of pre-Islamic religions also believe in evil eye. It is said that the Jews considered 99 percent of deaths to be caused by evil eye.[28] Arabs in the Age of Ignorance did not restrict evil eye to humans; they believed that some animals could also have evil eyes,[29] and they deployed different tricks to protect themselves against evil eyes. For instance, when someone came to have 1000 camels, he blinded the eyes of his best camel.[30] Before Arabs, the same beliefs were held by Semitic and Indo-Aryan people.[31]