This article is about the land of Fadak. For other usages of Fadak, see Fadak (disambiguation). 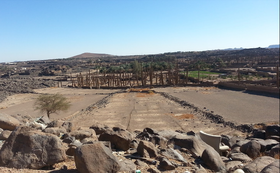 Fadak (Arabic: فدك) is a village in Hijaz, which had lush gardens with date palm trees which was conquered by Muslims after the Battle of Khaybar. The notability of Fadak is because of the quarrel between Lady Fatima (a) and Abu Bakr over its ownership, after the demise of Prophet (s). After Abu Bakr reached caliphate he confiscated Fadak, which was gifted to Lady Fatima (a) by the Prophet (s). After Lady Fatima (a) gave evidence, Abu Bakr admitted that he was wrong and wrote a handwriting that no one should encroach on it. But Umar b. al-Khattab took the handwriting and tore it. In the al-Fadakiyya Sermon Lady Fatima (a) complained about this incident.

During the time of the Umayyads and the Abbasids, this area was in the hands of the caliphs. Yet, some of these caliphs, including Umar b. 'Abd al-'Aziz and al-Ma'mun, returned it to the descendants of Lady Fatima (a), but the subsequent caliphs seized them. Today, Fadak is located in a city called al-Hait.

Fadak is located in Hijaz, 160 Km from Medina.[1] Although it is situated in the drylands of al-Harra, it is covered with date palms and provided land for gardens and farming. In the early Islamic period, Jews resided there.[2] The Shamrukh castle was located near Fadak, which was strategically regarded as the main military base for the Jews.[3] Reports state that the Jewish people were living there until the time of Umar b. al-Khattab, the second caliph, who ordered them to evacuate the region.[4]

During the emergence of Islam, the fertile soil and rich water sources allowed Fadak to be rich in date palms and other gardens. As a result, Fadak was a productive and fruitful land with profitable income.[6] It is said the date palms of Fadak are worth the same as date palms of Kufa-which is well-known for its extensive cultivation of date palms.[7] When Umar b. al-Khattab decided to expel the Jews, he paid them fifty thousand Dirhams (old currency of Hijaz) for the remaining half of Fadak, which was owned by the Jews.[8]

Fadak was undeniably a fertile land, but its annual income is unknown. According to a number of sources, Fadak produced an annual income of twenty-four to seventy thousand Dinars at the time of Prophet Muhammad (s).[9] As estimated by researchers, the income achieved from Fadak could easily cover the expenses of Banu Hashim, so they would not need financial support from the government or caliphate.

After the Battle of Khandaq where Muslims defeated their opponents. The Jewish people of Fadak sent their representative to Prophet Muhammad (s) to negotiate and make peace with Muslims. According to their peace treaty, Jews were supposed to give half of their gardens and fields of Fadak to Prophet (s).[10] As dictated in the Quran, the properties achieved for Muslims, in which they did not fight for, are owned only by Prophet (s). Such properties are called fay' which belong to Prophet Muhammad (s) and he can transfer the ownership or control of such properties to whomever he decides.[11] The Holy Prophet (s) would give away the income achieved from Fadak to Banu Hashim, the poor, and travellers in need of support. Subsequently, he (s) gave Fadak to Lady Fatima (a). Following the revelation of verse 26 of Quran 17[12], Prophet Muhammad (s) gave Fadak to Lady Fatima (a).[13]

Usurpation after the Demise of the Prophet (s)

The fame of Fadak among Shi'a is due to an event which took place after the demise of the Prophet (s) in which Abu Bakr took Fadak from Lady Fatima (a) and confiscated it for the caliphate.[14] Abu Bakr argued that the prophets do not leave inheritance as he had heard it from the Prophet (s).[15] But, Lady Fatima (a) mentioned that Abu Bakr's argument was against the Qur'an[16] and took Imam Ali (a) and Umm Ayman as witness that the Prophet (s) had gifted Fadak to her before his demise (and Fadak was not an inheritance). Abu Bakr accepted that and wrote a handwriting that no one should encroach on it. When Lady Fatima (a) exited the meeting, Umar b. al-Khattab saw her, took the handwriting and tore it.[17] As Imam Ali's (a) petition was rejected, Lady Fatima (a) went to the mosque and gave al-Fadakiyya sermon.[18]

After the first three caliphs, Fadak was in the hands of caliphs during the time of Umayyads and Abbasids and only in some periods, was given to the descendants of Lady Fatima (a):

After al-Ma'mun, al-Mutawakkil ordered to change Fadak's ownership to the condition before the order of al-Ma'mun. Most historical books have not mentioned anything about Fadak after the caliphate of al-Ma'mun. 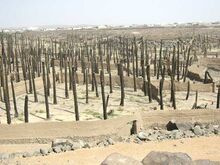 When al-Ma'mun (ruled 198/813-14 – 218/833) decided to return Fadak to descendants of Lady Fatima (a), many oppositions arose. Thus, he invited two hundred prominent scholars of his time and asked them to mention their opinions about Fadak's ownership. After the presentation of ideas, the meeting concluded that Fadak belonged to Lady Fatima (a) and needed to return to its original inheritors. The insistence of objectors made al-Ma'mun hold another meeting with more scholars from around the Islamic world. The result of this session was similar to the result of the first meeting. Therefore, in 210/825-26, he wrote to the governor of Medina, Qutham b. Ja'far, to return Fadak to children of Lady Fatima (a).[23]

Fadak is today located in Ha'it province of Saudi Arabia. According to a report (in 2008), the region of Fadak is known as "Wadi Fatima" and its palm gardens are known as "Bustan Fatima". Also, there are a mosque and wells in this area which are called "Masjid Fatima" and "Uyun Fatima".[24] Houses and towers of this area are turned to ruins and most palm trees have died.[25]