Hind, daughter of Utba known as Hind, "the liver-eater" (d. 14/635-6) was the wife of Abu Sufyan and mother of Mu'awiya. Hind is described beautiful, clever and a poet. She lost her father, uncle and brother in the battle of Badr. She participated in the battle of Uhud and encouraged polytheists to fight with Muslims. At the end of the war, she mutilated the body of Hamza (a) and bit his liver. She also made necklace and bracelet for herself using the ears and noses of Muslim martyrs. Hind became Muslim after the conquest of Mecca. She participated in the battle of Yarmouk and died at the time of the Second Caliph.

Hind was daughter of one of the chiefs of Quraysh named Utba b. Rabi'a b. Abd Shams. Mother of Hind was Safiyya, daughter of Umayya b. Haritha. Hind was the wife of Abu Sufyan and the mother of Mu'awiya. She was considered among the most beautiful and wisest women of Quraysh who was very clever. Some sources have quoted different poems from her.

Since she became Muslim at the time of the Prophet (s) and by him, she was considered among the companions.

The Prophet (s) and Muslims called her "Akilat al-Akbad" because she bit the liver of Hamza, Sayyid al-Shuhada and this title was also used for the children of Hind and they were called the "children of the liver-eater woman" (Ibn Akilat al-Akbad).

According to some sources, Hind was known for adultery in Mecca. But, some books disagreed this and mentioned some evidences against it.

Hind first married Hafs b. Mughayra al-Makhzumi. But, after a while, they divorced, about the reason and story of which some reports are mentioned in the sources. From her first marriage, she had a son named Aban.

After divorcing from Hafs, Hind criticized her father who made her marry someone without consulting her. Therefore, Hind put a condition that suitors should be introduced to her first and described for her, so that she could choose from among them. Hind chose Abu Sufyan from among the suitors.

Utba b. Rabi'a (Hind's father), Shayba (Hind's uncle) and Walid (Hind's brother) were killed in the battle of Badr. Hind composed several elegies for her killed family members, especially for her father. She also went to meetings of Quraysh and spoke about revenge and urged people to war.

Participation in the Battle of Uhud

Hind participated in the battle of Uhud. She stood in the middle of the army of Mecca and urged people to fight and not to escape. To urge polytheists, Hind recited the following poem,

We are daughters of the morning star. If you fight bravely, we open arms and spread beds. If you turn away from the battlefield, we too will keep away from you."

Without mentioning the reciter, al-Tabari mentioned the poem.

Hind ordered a slave called Wahshi to kill one of the three: the Prophet (s), Ali b. Abi Talib (a) or Hamza (a). Wahshi found Hamza (a) within his range and shot and martyred him.

Mutilation of Hamza and Other Martyrs of Uhud

After the end of the battle of Uhud and the victory of the polytheists of Mecca, Hind tore the chest and stomach of Hamza (a) and bit his liver and took it with some other limbs mutilated from his body with herself to Mecca.

About mutilation of the body of Hamza (a), Hind composed,

There was a grief I had, which was relived by Hamza (a) in Uhud. When I tore his stomach and took out his liver. It relieved the intense grief which was burning me."

In addition to Hamza (a), the bodies of all Muslims martyred in Uhud, except Hanzala b. Abi 'Amir whose father was among the polytheists were mutilated by Hind and other women present in the army of disbelievers and Hind made necklace and bracelet for herself using the ears and noses of Muslim martyrs.

Becoming Muslim during the Conquest of Mecca

After becoming Muslim, Hind went to her house, broke her idol and said, "we were conceited because of you."

Some sources considered her acceptance of Islam genuine. But, some doubted if she really became Muslim.

After Becoming Muslim and Her Death

After Hind became Muslim, the Prophet (s) asked her, "how do you see Islam?" Hind answered, "Islam is the best except three issues it has: bowing down, head cover and the shout of this black slave on top of Ka'ba (pointing to calling adhan by Bilal al-Habashi)." The Prophet (s) said, "Without bowing, prayer is void. That black slave is a good servant of God; and about head cover, what can cover better than the head cover?"

Hind together with Abu Sufyan participated in the battle of Yarmouk and urged Muslims to fight with Byzantines.

Toward the end of her life, Abu Sufyan divorced from her. During the rule of the Second Caliph, Hind took a loan of four thousand dirhams from the public treasure and began trading. 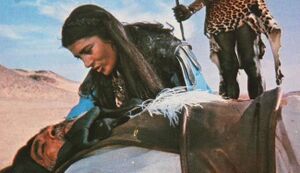 Hind on Hamza's body in the movie of Al-Risalah

Different movies and TV series are made about the early Islam in which Hind, daughter of Utba is one of their personalities.

In the movie Al-Risālah (The Message) directed by Mustapha Akkad, Irene Papas (in the English version) and Mona Wassef, the Syrian actress (in Arabic Version) played the role of Hind.