The Battle of Uhud (Arabic:غزوة اُحُد) was a famous Ghazwa of Prophet Muhammad (s) against the polytheists of Mecca in 3/625. Quraysh marched out toward Medina, as they desired to avenge their losses in the Battle of Badr while Abu Sufyan was the commander of the army. Prophet Muhammad (s) and senior members of Ansar and Muhajirun planned to fight against Quraysh within Medina and never left the city; on the other hand, young Muslims and also Hamza b. 'Abd al-Muttalib, Prophet's uncle, were willing to fight outside the city. Finally, Prophet Muhammad (s) decided to accept the wishes of the latter. At first, Muslims defeated Meccans, but a part of Muslim archers having 'Abd Allah b. Jubayr as their commander on Mount 'Aynayn on the left flank of Uhud, left their assigned posts and faced a surprise attack from Meccans which led to the defeat of Muslims. They faced a serious defeat with approximately 70 martyred Muslims, including Hamza b. 'Abd al-Muttalib, who got mutilated, even Prophet Muhammad (s) was badly injured on his face and tooth.

On Shawwal 5/March 21, 625, Meccan army arrived Urayd area near Uhud.[3] One of prophet's companions informed him about the number and military warfare of enemies. Some senior members of Banu Khazraj and Banu Aws including Sa'd b. Mu'adh, Usayd b. Hudayr and Sa'd b. 'Ubada were guarding in the mosque to early morning of Friday in the fear of Quraysh attack.[4]

On Friday, Prophet Muhammad (s) hold a meeting over how best to defend against the enemies. Prophet Muhammad (s) and many of senior members of Ansar and Muhajirun suggested that it would be safer to fight against them within Medina, while young Muslims and also Hamza b. 'Abd al-Muttalib were arguing to fight with them outside Medina. Finally, the Prophet (s) decided to accept the wishes of the latter.[5]

Prophet Muhammad (s) prepared his army and marched toward Uhud with one thousand soldiers.[6] They spent the night at Shaykhan, halfway between Medina and Uhud, and continued their way in the morning.[7]

Departure of 'Abd Allah b. 'Ubayy

Shortly after Prophet's soldiers settled in Uhud, 'Abd Allah b. 'Ubayy and several Muslim soldiers withdrew their support for Prophet Muhammad (s) and returned to Medina because they were discontent with the plan of fighting outside of Medina. Therefore, Muslim soldiers were reduced to 700 as they were ready to face the Meccans' army.[8]

Preparation for the Battle

Prophet Muhammad (s) stationed Muslim soldiers on the slopes of Mount Uhud and facing Medina so that they could face enemies while protected by the towering Mount Uhud. He assigned a group of archers on Mount 'Aynayn with 'Abd Allah b. Jubayr as their commander.[9] The Meccan army faced Muslim soldiers, Khalid b. al-Walid and Ikrima b. Abi Jahl were commanders of right and left flanks of their army.[10] Before the battle commenced, Prophet Muhammad (s) gave a speech to Muslim soldiers. He ordered archers never to leave their positions under any circumstances and only protect the other soldiers.[11]

In the beginning, Talha b. Abi Talha advanced and challenged Muslims to a duel, then 'Ali b. Abi Talib (a) rushed forth and struck Talha down. Afterward, Muslims became joyful and attacked through the lines of Meccans.[12] The Meccan army was pushed back, and they ran away.[13]

Muslim archers appointed on the left flank disobeyed Prophet's orders, and they ran downhill to load plunder. 'Abd Allah b. Jubayr tried to make them return to their posts, but it was unsuccessful. Earlier, Khalid b. al-Walid had some ineffective attacks to the left flank of the Muslim army.[14] When they noticed the scattered Muslim soldiers, they attacked again alongside Ikrima b. Abi Jahl to the remaining soldiers on the hill and the rear.[15] Rumors were circulating that Prophet Muhammad (s) was perished.[16] It brought disorder to the Muslim army; they scattered all over the place, even some started climbing the mountain.[17] Prophet Muhammad (s) was wounded due to the stones were thrown at him which caused injuries on his forehead and his tooth.[18] Prophet and a few remaining companions[19] managed to retreat and find a safe place on the mountain.[20]

As Al-Shaykh al-Mufid narrated from 'Abd Allah b. Mas'ud: "Muslim soldiers were scattered, and they tried to run away, only 'Ali b. Abi Talib (a) stayed near Prophet Muhammad (s) to protect him. Then some other Muslims joined Prophet (s), including 'Asim b. Thabit, Abu Dujana, and Sahl b. Hunayf."[21] 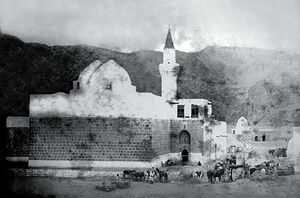 Tomb of Hamza b. 'Abd al-Muttalib before demolishing

Meccans swept through Muslim soldiers and martyred many, most importantly Hamza b. 'Abd al-Muttalib. Jubayr b. Mut'im's slave, Wahshi b. Harb, threw Hamza down with a spear and then cut open his corpse, taking out his liver for Hind, Abu Sufyan's wife. She attempted to eat his liver because Hamza had killed her father before. After Hamza was martyred and mutilated, Prophet Muhammad (s) was dejected and irritated.[22]

Muslims buried the dead, and Prophet Muhammad (s) performed prayer on each one of the martyred soldiers and also seventy times on Hamza's body.[23] The names of martyred Muslims are exclusively stated in old books; it is also said around twenty Meccans were killed.

After the fighting had ceased, Abu Sufyan came near Muslims who were gathered on slopes of hills, after praising idols he said, this war was a response to the Battle of Badr.[24]

According to the sources, some verses were revealed on this battle, most importantly verses 121 to 129 of Qur'an 3.[27] In addition, some hadiths are mentioned from Prophet Muhammad (s) on this battle.[28] Afterward Prophet Muhammad (s) sometimes visited the burial site of martyred Muslims in Uhud.[29] Since then, travelers visit their burial site on the way to Medina.