From wikishia
This article is about Event of Ghadir. For other uses, see Ghadir (disambiguation).

This introduction was according to divine command in al-Tabligh Verse which was revealed a little earlier than Dhu l-Hijja 18, 10/March 16, 632 commanding the Prophet (s) to communicate to people whatever has been revealed to him and if he does not, it is as if he has not fulfilled his mission. Subsequently, al-Ikmal Verse was revealed saying: "Today I have perfected your religion for you, and I have completed My blessing upon you, and I have approved Islam as your religion." Muslims arrived at Ghadir Khum on Thursday Dhu l-Hijja 18, 10/March 16, 632, but before the people of Syria, Egypt and Iraq leave for their own countries, Jabra'il (Gabriel) revealed al-Tabligh Verse to the Prophet (s) when God ordered the Prophet (s) to introduce Ali (a) as his vicegerent and guardian to people. 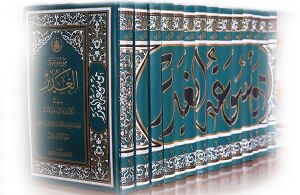 It has been esteemed so much that making allegiance with Musta'li b. Mustansar (an Egyptian ruler) was held on the Eid Ghadir Khum 487/1094-5[46]. Also, it is narrated by Sunni scholars that anyone who fasts 18th of Dhu al-Hijjah, (which is the day of Eid Ghadir Khum) God will reward him equal to the reward of 6 months of fasting[47]. The eve of Ghadir Khum is also celebrated among Muslims.[48]