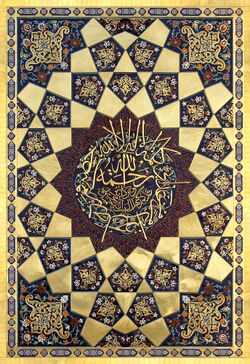 Hadith Silsilat al-Dhahab on a wall in the Shrine of Imam al-Rida (a).

Hadith Silsilat al-Dhahab (Arabic: حديث سِلسِلَة الذَّهَب, the Golden Chain Hadith) is a qudsi hadith narrated by Imam al-Rida (a) on his way to Merv through Neyshabur, on the unity of God and one of its main conditions. Since all the narrators of this hadith are the infallible Imams (a), all the way to the Prophet (s), who has narrated it from Jabra'il (Gabriel) from God, thus it has been called Silsilat al-Dhahab, which means Golden Chain. According to some reports as Imam al-Rida (a) was saying the hadith more than twenty thousand people were writing it.

This hadith is narrated by prominent Shiite scholars such as al-Shaykh al-Saduq (d. 381/991-2) in a number of his books, including al-Tawhid, al-Amali, Ma'ani l-akhbar, 'Uyun akhbar al-Rida (a), al-Fattal al-Nayshaburi (d. 508/1114) in his Rawdat al-wa'izin, and al-Tabari Amuli (d. 533/1139) in his Bisharat al-Mustafa with various chains of transmitters and some verbal variance. Al-Shaykh al-Tusi (d. 460/1067) has narrated this hadith in two separate narrations in his al-Amali but without the concluding part (i.e., “with its conditions and I am among its conditions”).

Some scholars have considered this hadith to be mutawatir (lit. massively transmitted), given the fact that it has been transmitted from the third/nineth century onward by a great number of hadith transmitters.

This hadith is famously called Hadith Silsilat al-Dhahab (The Golden Chain Hadith) because of its chain of narrators whom are all infallibles, starting from Imam al-Rida (a) who quotes the seventh Imam, who narrates from the sixth Imam and goes all the way to the first Imam who himself has obtained it from the Holy Prophet (s) who has received it from God. Therefore, this narration is a hadith qudsi.[2]

After narrating this hadith in his Kitab al-Tawhid, al-Shaykh al-Saduq writes, "The meaning of what the Imam (a) said is that one of the conditions of [confessing to] "There is no god but Allah" is confessing to his Imamate and that he was appointed by God as the Imam who must be obeyed."[3]

Considering the fact that the issue of tawhid and wilaya are mentioned beside each other in this hadith, it has been said that the main point of the hadith is asserting the link between these two principles, because the majority of the people of Nishapur at that time were Sunnis, who disregarded such a link between the two. Accordingly, Imam al-Rida (a) intended to remind them of the fact that reaching the true tawhid, which is the foundation of religion, and worshipping God alone can only realize through following the true Imam.

This hadith is found in Sunni sources as well. According to some of these sources, ten thousand, twenty thousand, or thirty thousand people were present and heard this hadith from the Imam (a). Thus, a great number of Sunni hadith transmitters have narrated this hadith, but only a small number of them, such as al-Qanduzi in his Yanabi' al-mawadda have mentioned the concluding part (i.e., “with its conditions and I am among its conditions”).

Some Sunni figures, such as Ahmad b. Hanbal and Aba Salt al-Hirawi, are reported to have said that if the chain of the transmitters of this hadith were recited to an insane person, he would be healed.

Apart from the well-known Golden Chain Hadith, another hadith is found in Sunni and Shiite sources with the same “golden chain”; that is, it is narrated from Imam al-Rida (a) from his fathers from God. However, in this second hadith, the wilaya of Imam Ali (a) is explicitly mentioned. The second hadith is narrated by al-Shaykh al-Saduq in his al-Amali and ʿUyun akhbar al-Rida (a), al-Shuʿayri (fl. 6th century AH) in his Jamiʿ al-akhbar, the Sunni scholar al-Haskani (d. 490 AH) in his Shawahid al-tanzil li-qawaʿid al-tafdil, and many later traditionists in their hadith collections.

It has been said that it is good to write this hadith and its blessed chain from Imam al-Rida (a) back to God on one’s burial shroud.