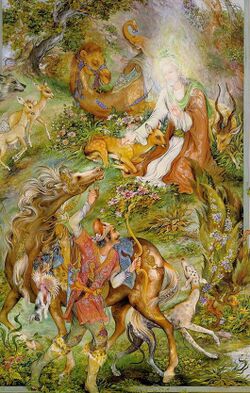 The guarantor of the gazelle by Mahmud Farshchian.

Well-Known Story of Guaranteeing a Gazelle

Authenticity of the Story

The story of Imam al-Rida (a) guaranteeing a gazelle as it is known among people and as it appears in recent works is not found in sources of hadiths. However, there are various stories of the Holy Prophet (s) and other Imams (a) guaranteeing a gazelle. The common thread of these stories is that a female gazelle is trapped by a hunter and she asks the Holy Prophet (s) or Imam (a) to guarantee her so that she could breastfeed her fawns and then come back. In most of these stories, the hunter eventually releases the gazelle upon her return.

It seems that the well-known story about Imam al-Rida (a) is a combination of different stories and hadiths. For there are stories in sources of hadiths regarding a gazelle that took refuge to the Holy Shrine of Imam al-Rida (a). It is probable that such accounts and hadiths concerning the Holy Prophet (s) and other Imams (a) guaranteeing a gazelle led to Imam al-Rida (a) coming to be known as the Guarantor. The title is several centuries old. The oldest work referring to the story of a gazelle taking refuge to Imam al-Rida (a) and asking for his guarantee is a verse of a long qasida (a form of poem) by 'Ali b. Hammad al-Basri, an Imami faqih, muhaddith and poet. Ibn Shahrashub, a Shiite scholar of the 6th/12th century, referred to the story of a female gazelle taking refuge to Imam al-Rida (a), appealing to Ibn Hammad's poem as his evidence. The story is widely known among Iranian Shias.

Other Infallibles (a) Guaranteeing Gazelle

According to a hadith concerning the Prophet's (s) guaranteeing a gazelle:

One day the Prophet (s) was crossing a road when a gazelle that was trapped complained to him and said: "O the Prophet (s), I have a fawn that needs my milk. Now I am trapped here and my fawn is hungry. Release me from this trap so that I can breastfeed my fawn." The Holy Prophet (s) replied: "how can I release you while the owner of the trap is not present here". She told him: "you release me and I will return once I breastfed my fawn". The Holy Prophet (s) released her on the condition that she return, and he stayed there until the gazelle returned. At this time, the owner of the trap arrived and the Holy Prophet (s) interceded for the gazelle. The hunter released her and after that, people built a mosque there.

A Gazelle Taking Refuge to Imam al-Rida's (a) Shrine

Abu Mansur b. 'Abd al-Razzaq said, "when I was young, I held the advocates of this mausoleum (that is, Imam al-Rida's (a) Shrine) in low regard, and on the road, I plundered its pilgrims and forcibly seized their clothes, money, letters, and money orders. One day I went out for hunting; I sent a panther to chase a gazelle. The panther was running behind the gazelle until the gazelle took refuge to a wall and stayed there. The panther stood in front of it, without approaching it. I tried to make the panther approach the gazelle, but it did not move. But whenever the gazelle moved away from the wall, the panther began chasing it, and as soon as it took refuge to the wall, the panther returned, until the gazelle entered the mausoleum via a den-like hole within the wall. I went into the building and asked where the gazelle was. But they said that they had not seen one. I went into the hole where the gazelle had gone in and saw its footprints, but I could not see the gazelle itself. I then pledged to God that I would not intrude and maltreat the pilgrims and would treat them nicely."

In his Bihar al-anwar, al-'Allama al-Majlisi cited a similar story according to which in the period of Sultan Sanjar, the Sultan's sick son went hunting. The gazelle he was chasing took refuge to the shrine. After seeing this, the prince threw himself on Imam al-Rida's (a) grave and was then healed. Because of this, Sultan Sanjar built a monument over the grave.

In Persian Poems and Arts

The story of Imam al-Rida (a) guaranteeing a gazelle widely appears in Persian poems and arts. Iranian Shias created several paintings with this theme. The best-known of these is the painting of the guarantor of the gazelle by Mahmoud Farshchian, the Iranian painter.

Animated Cartoon of the Kind Man

In 1391 Sh/2012, the animated cartoon of "Aqa-yi Mihraban" (the Kind Man) was made in Iran in Persian. The story was inspired by the story of Imam al-Rida (a). It was cast by the Iranian National TV several times.