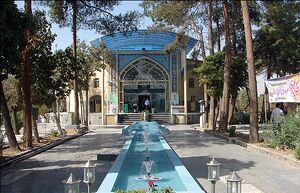 The tomb of Ibn Babawayh in Rey

In jurisprudential works, when the two have expressed similar opinions, they are addressed as "Saduqayn". Also, in cases when this word is in raf' state in Arabic, for example when it is positioned as Mubtada or the subject of the sentence, it will be changed as "Saduqan".