From wikishia
(Redirected from Rey) 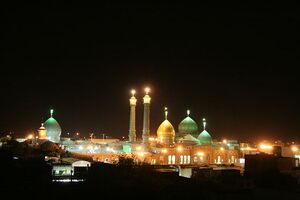 The Shrine of 'Abd al-'Azim al-Hasani and two other descendants of Ahl al-Bayt (a).

Ray or Rey (Persian: ری) is a religious city and a pilgrim destination in Iran which had a religious and political status since ancient times until the 6th/12th century. It was the religious capital of Zoroastrianism and the summer capital of Ashkani dynasty. Ray was also the capital of Buyid and Seljuk dynasties in Islamic era. After that its importance reduced significantly. Today "Ray" is known for the shrine of 'Abd al-'Azim al-Hasani. A number of Shiite scholars, politicians and artists are buried there including al-Shaykh al-Saduq, Muhammad Reza Mahdavi Kani, Ayatollah Kashani, Jalal Al-e Ahmad, and Nasir al-Din Shah.

Attacks of Mongols and their destruction, diversity of religions and conflicts among their followers are among the main reasons behind the decline of Ray. This city became famous again in the time of Constitutional Movement in Iran but it did not attain its former status. Ray is regarded a part of Tehran and it includes twenty eight shrines of descendant of Shi'a Imams (a), four hundred and eighteen mosques and seventy two husayniyyas. Seminaries have been active in this city for a long time; in addition, a number of universities have a branch there.

Ray is amongst the ancient cities of Iran[1] with a history that goes back to 7 century B.C. This city was called Ragha in Zoroastrian holy books[2]; even some sources mentioned that Zoroaster and his mother were born in Ragha.[3] In Achaemenid era, Ray was an important and flourishing city. It was also amongst the populous and political cities in first centuries after the emergence of Islam. In Buyid and Seljuk era, Ray was the capital of the country.[4]

A large number of world travelers and historians from different historical periods have written about Ray including: Ibn Faqih in 3/624 who called Ray the bride city on earth and a link between Khorasan and Gorgan and Iraq and Tabarestan[7]; Ahmad b. Jayhani in 5/626 who said there was no bigger city than Ray from Iraq to Nishabur[8]; Hamd Allah al-Mustawfi in 8/629 in his book Nihza al-qulub has called Ray as Umm al-Bilad (the mother of cities) of Iran and also Shaykh al-Bilad (the noble city) of Iran regarding its history.[9]

Ray is part of Tehran province in Iran. According to Statistical Center of Iran in 2011 Ray's population was over 300 thousand with over 100 thousand city dwellers.

Some historical sources stated that Islam conquered Ray in the time of 'Umar b. al-Khattab and few sources stated that it took place in the time of 'Uthman b. Affan,[10] between 18/639 to 24/645.[11] It is said Qarza b. Ka'b al-Ansari conquered Ray. Some researchers believe disagreements on the name of the conqueror of Ray is a result of resistance of people to surrender as it was captured a number of times.[12] Throughout history, Ray has been always regarded as a crucial city. It became the summer capital of Ashkani government from two centuries B.C.[13] In Achaemenid era Ray was a flourished and important city. In addition, it was among the most populous cities of Iran as it contained vital political buildings.[14] In the time of Buyid and Seljuk governments, Ray was chosen as the capital which represents the importance of the city in Islamic era.[15]

Mahdi, the successor of al-Mansur, the Abbasid caliph lived in Ray for some years. He made efforts to flourish the city. The Grand Mosque of Ray and the walls around the city were built by his orders.[16]

In the 4th/10th century, Abbasids gradually lost their grip on Ray and Buyids took over the city[17]. Rukn al-Dawla and Baha' al-Dawla, the Buyid kings, ordered to repair the buildings of the city.[18] Based on historical sources, Sahib b. 'Abbad built a grand library in the city which contained books carried by four thousand camels.[19] Ray became the cultural capital of Shiites in Buyid era and numerous scholars and faqihs were living there.[20]

Seljuk rulers conquered Ray in 234/849. Tughril repaired the city and then built a grand mosque which became known by his name. The Tughril Tower is the remains of Tughril's mausoleum. Also a number of other Seljuk Shahs were buried there including Tutush b. Alp Arslan and Tughril b. Alp Arslan.[21]

Diversity of Religions and Ethnic Groups

Ray was amongst the most important cities of Iran before and after the emergence of Islam. It faced with outrageous religious conflicts in the 5th/11th century. In addition, the attacks of Mongols deteriorated its destruction as the decline of a thriving city began. Selection of Tehran, a city near Ray, as the capital of Iran was another reason that prevented Ray to flourish and retain its significance. Although Ray returned to center of attention in Constitutional Revolution in Iran as constitutionalists went on a strike in the courtyard of 'Abd al-'Azim al-Hasani's shrine, today the significance of Ray is only because of the existence of 'Abd al-'Azim's shrine.

As Yaqut al-Hamawi wrote in Mu'jam al-Buldan, Ray was dealing with conflicts and battles before the attacks of Mongols.[33] According to historical reports, about ten Islamic sects and two non-Islamic sects were living in Ray who were presenting their religious beliefs with different theology and fiqh; it was the main reason that heated the conflicts in Ray.[34]

Ray is condemned in a number of Shiite narrations.[35] Some of them condemned this city, as its governance played role in martyrdom of Imam al-Husayn (a).[36] Some regarded the soil of Ray as evil and cursed.[37] According to historical reports, 'Umar b. Sa'd was preparing to set out for Ray to take over the governance when 'Ubayd Allah b. Ziyad ordered him to face Imam al-Husayn (a). At first Ibn Sa'd refused but he was threatened by 'Ubayd Allah that if he refuses to do so, he has to give away the governance of Ray. Then he accepted the order and faced Imam's (a) army in Karbala with his troops.[38]

Mongols Attack and Selection of Tehran as the Capital

The attacks of Mongols to Ray led to the demolition of the city. It was so horrible that Ray could never recover and flourish again.[39] It was partially rebuilt in the time of Ilkhanate and successors of Genghis Khan especially Mas'ud Ghazan but then again another attack by Timur led to the demolition of the city yet again.[40] According to travel accounts of a Belgian traveler: "There was nothing left of the significance and grandeur of this great ancient city". He described that all the palaces, temples, mosques and houses were demolished and turned into wreckage which remained until Safavid era.[41] When Shah Tahmasp I, chose Tehran as the capital of his government in 944/1538, Ray became a part of Tehran.[42] Since then Ray was known only for existence of 'Abd al-'Azim al-Hasani's shrine.[43]

When constitutionalists went on a strike in the Shrine of 'Abd al-'Azim al-Hasani for a month[44] in 1323/1906, Ray returned to center of attention.[45] In addition, some other strikes took place in 'Abd al-'Azim's shrine including the strike of merchants against Joseph Naus, a strike against opposition of Muhammad 'Ali Shah against Constitutional Movement, the strike of Sayyid Hasan Mudarris and a number of religious scholars to force Ahmad Shah to sack Samsam al-Saltana.[46] Since then the importance of Ray was due to the existence of the shrine of 'Abd al-'Azim al-Hasani.[47]

Besides the shrines of descendants of Shiite Imams buried in Ray, a number of political and religious grand figures are buried in Ray as well, especially in the courtyard of 'Abd al-'Azim al-Hasani's shrine including Muhammad b. Zakariyya al-Razi a Muslim medic and philosopher, Imam Fakhr al-Razi or Muhammad b. 'Amr Fakhr al-Din Khatib al-Razi[48], al-Shaykh al-Saduq, Nasir al-Din Shah[49], and Jalal Al-i Ahmad. The tomb of al-Shaykh al-Saduq in Ibn Babawayh cemetery in Rey.

'Abd al-'Azim al-Hasani's shrine is the most prominent shrine in Ray who is also known as Sayyid 'Abd al-Karim; his lineage goes back to Imam al-Hasan (a) within four generations. He has narrated hadiths from Imam al-Jawad (a) and Imam al-Hadi (a). Shiite scholars like al-Shaykh al-Saduq and al-Shaykh al-Tusi have regarded him as thiqa (reliable hadith narrator).[51]

The Ibn Babawayh's mausoleum is the burial place of al-Shaykh al-Saduq who passed away in 381/991.

Ray had a large number of schools and scientific centers until the 6th/12th century.

Seminary school of Burhan, Seminary of al-Zahra, Seminary of Amir al-Mu'minin, and Seminary of 'Abd al-'Azim al-Hasani were the existing seminaries in the 15th/21st century.

The College of 'Ulum Hadith and the Grand Library of Ray are among the notable scientific and cultural centers of Ray.[52]