Takht-i Fūlād (Persian: تخت فولاد) is an old cemetery in the southern bank of the Zayanderud river in Isfahan with an area of 75 hectares.

Because of its vastness, many well-known figures buried in it, and its historically valuable monuments, Takht-i Fulad counts as an important cultural and historical site in Iran. The cemetery is also known as Mazar Baba Rukn al-Din (the mausoleum of Baba Rukn al-Din).

There are different accounts of why this cemetery came to be known as "Takht-i Fulad" (Steel Throne). Some of them lack any reliable sources; for example, on one such account, Imam al-Hasan (a) built a steel throne in this cemetery in order to disable the spell of the Jews. But it has been called into question. 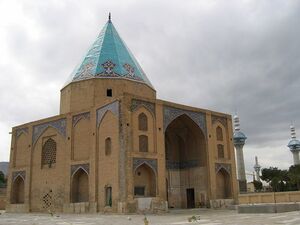 Takht-i Fulad is also called "Mazar Baba Rukn al-Din" because the burial place of the 8th/14th century mystic and Sufi, Baba Rukn al-Din, is located on the western side of the cemetery.

Although the history of Takht-i Fulad is believed to date back to the period of Oljaitu, the alleged existence of a grave known as "Lisān al-Arḍ" (Arabic: لسان الأرض, literally: the tongue of the earth) on its northeastern side ties it to a very far point in the past. Lisan al-Ard is identified with Joshua, an Israelite prophet. People have for long visited the place on nights before Fridays to pray and worship. Some people take Lisan al-Ard to date back to the Daylamite period. In the periods of Daylamites and Ziyarids, important events happened in this place; for example, the well-known fireworks of Mardavij, the son of Ziyar, in the Sadeh festival of 323/935 which led to his murder.

Mystics and ascetics of 5th/11th to 9th/15th centuries built worshipping places and hermitages for themselves in this area. For example, Kamal al-Din Isma'il al-Isfahani (d. 635/1237-38), the well-known poet, was killed by the Moguls in a hermitage in Takht-i Fulad.

In 7th/13th and 8th/14th centuries, a number of great mystics—who were usually known as "Bābā" (father) or "'Amū" (paternal uncle) at the time—resided in Takht-i Fulad. The best-known of them was Baba Rukn al-Din. Adjacent to Baba Rukn al-Din's grave were connected chambers in one of which—known as "Chilla Khana"—ascetics stayed in isolation for 40 days and nights.

In the Period of Oljaitu

In the Safavid Period

In the Safavid period, Takht-i Fulad was one of the twelve cemeteries of Isfahan. 400 tekyehs and buq'as were constructed in this cemetery, including the tekyeh of Baba Rukn al-Din, tekyeh of Mir Findiriski, tekyeh of Mirza Rafi'a, and tekyeh of Khatunabadi. In this period, a street was constructed parallel to Chaharbagh Bala (Chaharbagh 'Ulya 'Abbasi) towards the road to Shiraz which passed through the tekyehs of Takht-i Fulad. Chaharbagh near this street, as well as its waterfalls and ponds and many other Safavid works in the area were destroyed in the Afghan attack and in the early period of the reign of Muzaffar al-Din Shah Qajar (1313/1896 - 1324/1906).

In the Qajar Period

In the Qajar period, Muhammad Husayn Khan Amin al-Dawla made a street from the south of Khaju Bridge to the gate of Takht-i Fulad, which came to be known as "Chaharbagh Amin Abad." Today the street is called "Fayz".

In 1294/1877, Takht-i Fulad was one of the two cemeteries of Isfahan with an area of over one fourth of parasang (a historical unit of distance).

In the Pahlavi Period

From about 1956 to 1971, more parts of the city were extended towards the area of Takht-i Fulad. Changes occurred in this area in the last 50 years, including: change of architecture and urbanization, the falling of Takht-i Fulad within the urban area, residence of many homeless people near the graves and the Tekyehs, and construction of new buildings and monuments in it.

During years, many tekyehs and graves of Takht-i Fulad were destroyed, including tekyeh of Nawwab, the grave of Fadil Ardistani, a Safavid scholar, the grave of Diya' the poet and tailor, the grave of Dami the poet, the cellar of the progeny of Mir Muhammad Sadiq Musawi Khwaju'i in the south of tekyeh of Khatunabadiha, and the grave of Mulla 'Abd al-Qadir 'Ashiqabadi, the well-known mystic of the late Safavid period. Areas of these sites either turned into houses and shops or into streets. Important changes in this cemetery in the last few years include the transfer of the remnants of Mulla Muhammad Sadiq Ardistani's grave from Khaju Bridge to tekyeh of Kaziruni and the construction of a telecommunication center across from the tekyeh of Agha Bashi.

In the Present Period

Since when the cemeteries inside the city were abandoned until 1984 when the city's cemetery was built in Bagh Rizvan, Takht-i Fulad was the only cemetery in Isfahan. However, today only martyrs are buried in this cemetery.

The present Takht-i Fulad leads from south to Sa'adat Abad and Sajjad streets; from west to Jahangir Khan Qashqa'i street; from north to tekyeh of Mir and Shahid Mustafa Kiyani alleys, and from east and southeast to another part of Sajjad street. Some tekyehs and graves are outside this limit. Between tekyehs and graves of Takht-i Fulad are numerous residential houses as slums. In recent years, Eid prayers are performed in the Musalla mosque by Ayatollah Shaykh 'Abbas 'Ali Adib. The spiritual background, ritual events and worships, mosques, pilgrimage places, and the huge musalla under construction with a big building, a peculiar architecture, and very tall minarets are evidence of a special concern about this area at present.