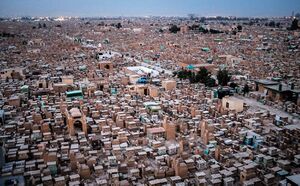 It is of immense importance for shi'as due to many Hadiths regarding its significance. On the basis of some hadiths, the cemetery is where some of the prophets (a) and great virtuous men return after their death (raj'a), and any pious man's spirit who passes away in any spot of the world will come to this cemetery.

Its location in Najaf has raised its importance because of Imam 'Ali's (a) holy shrine being there. Many pilgrims of al-'Atabat al-'Aliyat (The holy shrine of Imams (a)) visit this area beside visiting other sacred places. Furthermore, a lot of religious, political and social figures of shi'a have been buried there.

The word "wadi" means a narrow area of land, prone to torrent, between two mountains, where the flood goes through and dwindles gradually.[1] The word "al-salam" is one of Allah's name, denoting protection from inner and outer harms and dangers in Arabic language[2].

Some references believe this name has been selected by the Holy Prophet (s) or Gabriel, meaning anyone entombed in this cemetery is exempt from the judgment and punishment of Barzakh (the world between this world and the future life).[3]

Al-Kulayni (d. 328/940) has narrated a Hadith about this cemetery, descended from Imam 'Ali (a) in which the phrase "Wadi l-Salam" is applied to suggest this cemetery[4].

In some hadiths, this cemetery is referred to by the term "beyond Kufa", without mentioning the exact name "Wadi al-Salam". For instance, the Hadith narrated by al-Majlisi al-Thani (al-Majlisi II) from al-'Ayyashi: "The first site on earth where God was worshiped was the back of Kufa. When God ordered the angels to prostrate for Adam (a), they obeyed behind Kufa", said Imam 'Ali (a).[5]

Wadi l-Salam is located in Najaf, a city of Iraq. Imam 'Ali's (a) holy shrine and a street named 'Ali b. Abi Talib are situated in the south of it. It meets the road between Najaf and Karbala from the East, Hay al-Muhandisin region from the North, and former sea of Najaf from the West.

According to hadiths, the background of this cemetery goes back to pre-Islamic era. There are not many historical proofs of its state before Islam; nevertheless, it appears that this place has been a cemetery since long time ago. Some Hadiths have extended its background to the time when the angels prostrated for Adam (a), as in a Hadith said to be from Imam 'Ali (a)[6].

On the basis of some hadiths, some of the prophets have been buried in Wadi l-Salam. As al-Majlisi narrated from al-'Ayyashi, this spot has been a place for Adam's prayer and some of other prophet's coming after him.[7]

It has been a see-sight for pilgrim Iranian caravans; however, most of the caravans prohibit their members from visiting this cemetery, for the country has been unsafe over the recent years. Being large and extensive and having tall tombs and old rooms, Wadi l-Salam seems so insecure lately.

One of the reasons to the importance of this cemetery is its proximity to Imam 'Ali's (a) holy shrine.

In addition, it has been indicated and admired frequently in Shi'a references. It appears the earliest hadith about it is one narrated by al-Kulayni (255/869 - 329/940-1), said to be from Imam 'Ali (a). Subsequent references have narrated this hadith numerously. In this hadith, Imam 'Ali (a), accompanied with one of his companions, goes to Wadi l-Salam and uttered: "No pious man passes away on any part of the earth unless his spirit is ordered to come to Wadi l-Salam. Here, is a part of Heaven."[8]

Al-'Allama al-Majlisi has narrated that the Holy Prophet (s), along with Gabriel, went to Wadi l-Salam and performed prayer in the Ascension Night. According to this narration, Wadi l-Salam has been a place of prayer for Adam (a) and other prophets.[9]

Moreover, this is the first area of earth in which God was worshiped, as hadiths witness[10]. The shrine attributed to Hud (a) and Salih (a)

Aside from the graves of the cemetery, some constructions have been built that have always been at the center of attention for Shi'a pilgrims. Some constructions, made to respect for great men at their tombs, are so valuable in the aspect of religion, history, and art. Such as:

According to some hadiths, two prophet's tombs, Hud (a) and Salih (a), are situated in Wadi l-Salam. In fact, there are two tombs said to belong to these two prophets. Initially, with al-'Allama Bahr al-'Ulum's attempt, a dome and a construction composed of chalk and stone, were built. The construction was renovated with the aid of an Iranian benefactor, and the dome was ornamented with beautiful tiles in 1337/1918-9.[12] Maqam of Imam al-Mahdi (a) and Imam al-Sadiq (a)

At the north part of Wadi l-Salam, there is an area called Maqam al-Imam al-Mahdi (a) and Maqam al-Imam al-Sadiq (a). There is an old construction there, along with two signs, pointing the place where Imam al-Sadiq (a) and Imam al-Mahdi (a) are believed to have prayed. A blue dome is right above it. The construction has been built thanks to al-'Allama Bahr al-'Ulum's efforts. A person by the name of Sayyid Muhammad Khan refurbished it in 1370/1950-1, and it has maintained its state until today. He, also, made a dome with blue tiles above the construction.

There is a stone in there on which Imam al-Mahdi's Ziyara (a blessing prayer for a Imam) is incised. Its date goes back to the year 1200 AH/1786. There has been narrated from Imam al-Sadiq (a) that: "Anyone who visits my ancestor's tomb, should recite a prayer of two units, and again a two-unit one, and then another two units of prayer. The first prayer should be performed at the entrance of Imam Ali's (a) tomb, the second one at Ra's al-Husayn, and the third one at Imam al-Mahdi's (a) pulpit (al-minbar)".

There is another area (maqam) inside this construction ascribed to Imam al-Sadiq (a). There is no evidence and information indicating the reason of this naming.[13]

A mosque and a construction have been built in respect of Imam al-Sajjad's (a) prayer and staying there. It is located at one kilometer west of Imam 'Ali's (a) holy shrine, beside the lake Bahr al-Najaf at a distance of 250 meters, and adjacent to Safi Safa tomb. The dimensions of this mosque are 15*18 meters. It has a dome, and the walls are decorated with tiles, and there is an altar (mihrab) ascribed to the area where Imam al-Sajjad (a) said prayer. It is said that when Imam al-Sajjad (a) came to visit Imam 'Ali's tomb in Najaf, he performed his prayer there and stayed for the night.

At the time when Safavid dynasty ruled Iraq, a construction was built in this area which still exists.[14]

Many religious, political, and social figures of Shi'a have been buried in this cemetery by either their will or their relative's request. Seemingly, their purpose had been being adjacent to Imam 'Ali's (a) holy shrine. Some of shi'a figures entombed in this cemetery are: