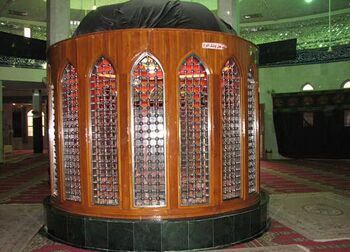 There is nothing in Sunni sources regarding whether Imam al-Husayn's (a) head is buried in Kufa or Najaf, and there is no commonly accepted view among Shiites to the effect that his head is buried in one of these two places. There are, however, hadiths implying that Imam al-Husayn's (a) head is in Imam 'Ali's (a) Holy Shrine. Other hadiths are confirming such a story. However, there are problems with these hadiths that made them hard to be accepted by Shiite scholars.

There is a place inside Masjid al-Hannana well-known as the place where Imam al-Husayn's (a) head is put there. It is said his head was put there when heads of Martyrs of Karbala were taking from Karbala to Kufa.

According to some Sunni sources, when Yazid b. Mu'awiya sent the prisoners of the Event of Karbala to Medina, he sent Imam al-Husayn's (a) head to 'Amr b. Sa'd b. al-'As in Medina, and 'Amr buried it in the al-Baqi' Cemetery. According to some scholars, the head was sent to Banu Hashim, and they buried it in al-Baqi' after ghusl and burial and funeral prayer.

On some accounts, Imam al-Husayn's (a) head was attached to his body. Both Shiite and Sunni scholars maintain this. Some Shiite scholars, such as al-Shaykh al-Saduq, al-Sayyid al-Murtada, al-Fattal al-Naysaburi, Ibn Nama al-Hilli, al-Sayyid b. Tawus, Baha' al-Din al-'Amili, Abu Rayhan al-Biruni, al-Qazwini, and al-'Allama al-Majlisi are proponents of this view.

Also, Ibn Nama al-Hilli wrote, "What can be relied upon among reports is that after the head of Imam (a) was moved from one city to another among different cities, it was returned to the body and was buried beside the body." Al-Sayyid b. Tawus wrote, "It is reported that the head of Imam al-Husayn (a) was returned and buried in Karbala."

Al-Majlisi regarded one of the reasons for the recommendation of ziyara of Imam al-Husayn (a) on the day of Arba'in, joining of the heads to bodies by Imam al-Sajjad (a)." Elsewhere after mentioning others' views in this regard, he wrote that, "It is famous among Imamiyya scholars that the head of Imam (a) was buried beside the body."

Regarding this issue, Abu Rayhan al-Biruni wrote, "the head of al-Husayn (a) was joined to his body and was buried beside it."

Also, al-Qazwini wrote that "The first day of the month of Safar is celebrated by Umayyads, because, on that day, the head of al-Husayn (a) was brought to Damascus and on the twentieth of that month, it was returned to the body." 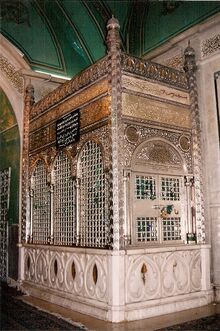 Darih of Ra's al-Husayn (a) in Umayyad Mosque in Damascus. 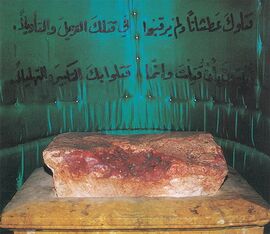 Based on some reports, some blood from Imam al-Husayn's (a) head has dropped on this rock. Later, a mosque called Masjid al-Nuqta has been constructed in the place in Aleppo.

According to Sibt b. al-Jawzi, Yazid b. Mu'awiya sent Imam al-Husayn's (a) head to Abu Mu'it's household as retaliation for 'Uthman b. 'Affan's head, and they buried the head in a house that was later attached to al-Raqqah's Jami' Mosque.

When the caravan of Karbala's prisoners and the heads of martyrs in Karbala arrived in Aleppo from Iraq, they stayed near a mountain called "Jawshan" west of Aleppo, besides a monastery called "Marat Marutha". A monk in the monastery bribed the guards of the caravan to put Imam al-Husayn's (a) head on a rock inside the monastery. He stayed near the head until the morning. At the sunrise, when they took the head, there were drops of blood on the rock. When the caravan moved on, the people of Aleppo learned about the story and congregated around the rock and mourned for Imam al-Husayn (a). According to Shiite accounts, blood used to spring on that rock every year on the Day of 'Ashura, attracting the attention of many people of Syria.

The Shiite figure, Sayf al-Dawla al-Hamdani was the first person who built a chamber and a mosque over the rock and the monastery in 350/961-2 and called it Masjid al-Nuqta (mosque of the spot [of blood]). 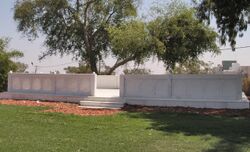 On some accounts, a group of people from Ashkelon ('Asqalan) went to Yazid b. Mu'awiya and asked him to let them bury Imam al-Husayn's (a) head in their city. Yazid gave them the head; they buried the head in Ashkelon and made a mausoleum over it.

According to another account, during the caliphate of al-Mustansir Bi-Allah al-Fatimi, a Fatimid caliph and the ministry of Badr al-Jamali, a person saw in his dreams that Imam al-Husayn's (a) head is buried in Ashkelon. He learned the exact place in his dream. When he woke up, they exhumed the place he saw in his dream, and they found the head. Badr al-Jamali made a mausoleum over the place.

According to Yaqut al-Hamawi, there is a mausoleum in Cairo where Imam al-Husayn's (a) head is buried. Sibt b. al-Jawzi took the fifth view about where the head was buried to be that it was buried in Cairo: on this view, the head was moved to Ashkelon by Fatimid caliphs, and then it was moved to Cairo and buried there and a great mausoleum was built over it, which is frequently visited today.

According to some sources, when Abu Muslim al-Khurasani conquered Damascus, he moved Imam al-Husayn's (a) head to Merv and buried it in Dar al-Imara.

There is a mausoleum in the city of Imam Sahib, located in Kunduz province north of Afghanistan. The epigraphy at the entrance of the mausoleum reads that after the Event of Karbala, Imam al-Husayn's (a) head was moved to Ashkelon in Syria. In the sixth/twelfth century, the Fatimid caliph of Egypt moved the head to Egypt, but before the head was buried there, some Turks took the head to Bactria and buried it in a place called Arhang. In this place (just like the mausoleum of Shahmardan in Mazar-i-Sharif), the flag of the mausoleum is taken every year on March 30, and then there is a ceremony in the city for forty days. Local officials and visitors from nearby and distant places attend the ceremony.

Given that most of these views have appeared in Sunni sources and have problems with respect to their chains of narrations as well as their contents, most Shiite scholars maintained the view that Imam al-Husayn's (a) head was attached to his body and is thus buried in his holy shrine in Karbala.