Masjid al-Nuqṭa (Arabic: مسجد النُقطة) or Mashhad al-Nuqṭa (Arabic: مشهد النُقطة) is among the places Shi'a visit in the city of Aleppo, Syria. This pilgrimage site is built in a place which is said that the head of Imam al-Husayn (a) was put on a stone during its transfer from Karbala to Damascus and some drops of its blood were poured on that stone. 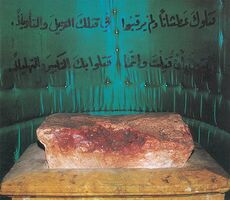 It is said that when the caravan of the captives and the heads of the martyrs of Karbala arrived in Aleppo, they stood near mount Jawshan and the monastery of "Marat Marutha". They put the head of Imam al-Husayn (a) on a rock and when they picked it up, some drops of its blood had poured on the rock.[1] Later, people of Aleppo built a shrine upon that stone.[2]

History of the Building

In 350/961-62, Sayf al-Dawla al-Hamdani built a chamber and a mosque over the stone on which the blood of Imam al-Husayn (a) had flown and called it Masjid al-Nuqta (trans: the mosque of the spot).[7] However, some researchers dated the history of this building back to the first/seventh century, at the time of 'Abd al-'Aziz al-Umawi. They considered the reports about the construction of the shrine at the time of Sayf al-Dawla al-Hamdani in 4th/10th century and Malik Salih Isma'il in sixth/twelfth century to be actually about the expansion and reconstruction of the building.[8]

Saladin (r. 569/1174 – 589/1193) visited this place and donated some money for its expansion. After him, his son, al-Malik al-Zahir Ghazi dedicated a mill for it. He also appointed Shams al-Din Abu 'Ali al-Husayn b. Zuhra who was the leader of Sayyids in Aleppo at that time as the manager of this building. In that period, four rooms were built at the north of this shrine.

In 658/1260, Mongols attacked this shrine and looted its properties. After this event, Mamluk Sultan Malik al-Zahir Baibars reconstructed it and appointed a manager, a person to call for prayer and the Imam of congregational prayer for it.[9]

At the time of Ottomans, there were less attention to this shrine. But, since the second half of thirteenth/nineteenth century, people of Aleppo held their 'Ashura ceremonies in this shrine, when they recited the story of the noble Prophet (s) and distributed food as nadhr. Sultan 'Abd al-Hamid 'Uthmani reconstructed some parts of it and provided its expenses from his treasure of the estates. During the World War I (1914 – 1918), Mashhad al-Husayn (a) was turned to an arms depot. In 1337/1918, the building of the shrine was destroyed due to an explosion, but the stone which had the marks of blood of the head of Imam al-Husayn (a) was not damaged and was moved to Mashhad al-Muhsin (a).[10]

In 1960, Ja'fari Institute for Islamic Reconstruction and Ihsan was founded for reconstruction of Mashhad al-Nuqta. During 1961 to 1967, this institute engaged in reconstruction of this shrine and in 1979, built ten rooms in its outside courtyard. In 1990, the stone on which the blood of the head of Imam (a) had flown was returned to its original place.[11]

This shrine is located at the feet of mount Jawshan to the west of Aleppo[12] and Mashhad al-Siqt and the graves of some Shi'a scholars such as Ibn Zuhra (585/1189-90), Ibn Shahrashub, and Ahmad b. Munir al-Tirablusi (548/1153-54) are near it.[13] Some historians mentioned the cause of naming mount Jawshan, staying of Shimr b. Dhi l-Jawshan, the captives and the heads of the martyrs of Karbala there.[14] 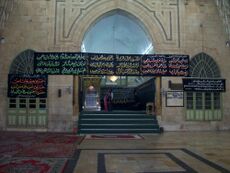 Current view of the inside of the mosque

The Masjid al-Nuqta area in Aleppo is known as "Hayy al-Ansari". It is near Mashhad al-Siqt above the doorway of which the names of the Fourteen Infallible (a) are engraved.[15]

This building has a hall at the end of which there is a porch and beside it there is a small darih in which a stone is placed at the top of a cylinder and it is said that it is the stone on which the head of Imam al-Husayn (a) was placed and drops of the blood of his head were poured on it.[16]