The Umayyad Mosque (Arabic: الجامع الاموي) is an old mosque with many artistic works which was built by the order of the Umayyad caliph Walid b. 'Abd al-Malik (d. 96/714-5). The architectural style of this mosque is borrowed from the Byzantine style. The Maqam of Khidr (a), Prophet Hud (a), Prophet Yahya (a), Maqam of Imam al-Sajjad (a) and Ra's al-Husayn (a) (the place of the head of Imam al-Husayn (a)) are in this mosque. Imam al-Sajjad (a) gave the speech eliminating the Battle of Karbala in this mosque.

There is a mosque with the same name in Aleppo, Syria.

The place of this mosque had been used as a temple during history before building the mosque. In 14 AH/2 0 AD or 17 AH/ 23 AD, following the conquest of Damascus by Muslims, half of this place was changed as a mosque and another half remained as a church as was negotiated. The size of its primary area, according to Ibn Jubayr, was about 150 meters from the east side to the west side and about a hundred meters from south to north and reached fifteen thousand square meters in total.

When Mu'awiya b. Abi Sufyan took the power in Syria, he decided to add the half which was a church to the mosque, but Christians did not accept it. After him, 'Abd al-Malik b. Marwan gave them too much money so that they allow their half to change into a mosque but they did not accept until Walid b. 'Abd al-Malik persuaded them to do so.

It cannot be exactly said that how much of the old Christian part Walid added to the mosque, but the two south minarets are the same towers that belonged to the old church. Muslims turned the old Roman towers in the corners of the mosque of Damascus into minarets and called Adhan from their tops. Building minarets was not common before Umayyads and the model they used was the towers in the temples in Syria and during the time of Mu'awiya, the model was used among Muslims in Egypt.

In building this mosque, Roman, Iranian, Indian and Moroccan engineers helped. For building this mosque, Walid b. 'Abd al-Malik used the taxes received from Syria for several years and also the gold and silver eighteen ships carried from Cyprus as well as the tools and cubic tiles which were sent by the king of Romans.

Over the hall of the mosque, Walid built a dome called "Nasr or eagle" and built columns beneath it. He decorated it with gold, jewels and silk coverings. He also decorated the mihrab of the mosque with jewels, gold and silver chandeliers and beautiful Mu'arraq works and gold chains.

Present Appearance of the Mosque

Currently, after few repairs made to Jami' Umawi toward the ruling of latter Mamalik (rulers), i.e. until the eighth/fourteenth century, it has remained the same way. The courtyard has been tiled with stones of Mamalik (rulers) and the walls are made of large stones. The lower half of the walls (from the ground level) on the north, east and west sides of the church have remained from the pre-Islamic era and the top half of them have been added at the time of Walid and later periods, the stones of which era are recognizable. Walid built roofs over the walls and built stone columns with arcs over the walls on the east, north and west sides and place them under the mentioned roofs.

In the period of Mamalik (rulers), west walls were painted with paintings in golden colour which were called Fasayfisa'. Unfortunately, Fasayfisa' of most roofs have been gradually destructed and there is nothing remained of them.

The hall of the mosque has had twenty columns on the east side, twenty columns on the west and four main big columns with sizes of 2 by 3 meters are in the middle of the mosque. They are columns of the big dome which is called "Qubbat al-Nasr". The internal height of this dome is more than thirty meters. It is fully made of stone decorated and reconstructed with white plaster. On the mentioned forty columns, there are forty other small columns.

These columns are in arc form and uphold the roof of the mosque, which is one of the tallest roofs of the mosques in the world. There are three small domes built in the courtyard:

This dome was built by the Emir of Damascus, Fadl b. Salih b. Ali al-'Abbas, cousin of al-Mansur al-'Abbasi in 172/788-9 and the properties and treasures of the mosque were kept there and thus became famous as Qubbat al-Mal (Arabic: قبة المال, Mal means properties).

This dome is located on the east of the courtyard, beside Bab al-Sa'at which was built in fifth/eleventh century and was the place for the clock of the mosque.

It is one of the biggest structures over the mosque which is over the hall and made of marble stone.

Doors of the Mosque 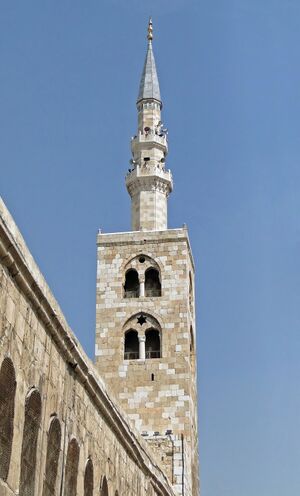 Since the time of building the mosque, several doors were built on the four sides of the mosque for entrance and exit which have been:

Bab al-Ziyada: on the wall in the direction of Qibla, south of the mosque which, during the Ottoman period, was called Bab al-'Anbaraniyyin and later became known as Bab al-Qawafin.

Bab Jayrun: on the east side of the mosque and one of the biggest gates to the mosque. This door later became famous as Bab al-Sa'at and was also called Bab al-Kilasa and Bab al-Labbadin. Ra's al-Husayn (a) is located beside it.

Bab al-Natifin: It is located on the north of the mosque and has also become known as Bab al-Firadis and Bab al-'Imara.

This mosque has three big Ma'dhanas (places to call for prayer) which are built of stone in cubic form and are located in the north, south-west and south-east of the mosque:

East Minaret: this Ma'dhana is known as Minaret al-Bayda' and Minaret 'Isa. They say that when the End of the Time comes, Prophet Jesus (a) will descend upon this minaret.

North Minaret: It is known as al-'Arus, since in the past, at the time of holding ceremonies and weddings, people installed lamps and hung colourful clothes from it and decorated it with them and believed that this will bring them blessings.

West Minaret: it is known as Aq bai.

Signs and Stations of Prophets (s) in the Mosque According to verses of the Qur'an, God granted Prophet Zakariyya (a) a son in old ages and named him Yahya.[1] Since his youth, he (a) was God-wary and always prayed at al-Aqsa Mosque and did not associate with worldly people. When Prophet Jesus (a) began his mission as a prophet, Yahya (a) testified to it and then he (a) was murdered by the order of Roman client king of Judea.

Grave and Station of Prophet Hud (a)

Some historians of Damascus have said that the grave of Prophet Hud (a) is in Umayyad mosque. Its location is at the left side of Ra's Yahya (a), in front of the fourth column in the wall of Qibla from the east side of the main hall of the mosque and on the stone in the wall of Qibla, it is written in beautiful handwriting on a green background, "هذا مقام هود النبي عليه السلام" (This is the station of Prophet Hud, Peace be upon him). At the time of Walid, a tablet was found in this place which was translated and they found it containing some advice and consults from Prophet Hud (a). The grave of Hud (a) has also been reported to be in Wadi l-Salam of Najaf.

Station of Khidr (a)

It is said that Khidr (a) used to pray in Umayyad mosque and his place of prayer has been on the east side of Qibla (south-east) near the east minaret. Today, near the main mihrab of the mosque and along with the station of Hud (a), a green sign with the phrase "هذا مقام خضر النبي" (This is the station of Prophet Khidr (a)) can be seen.

Place of the Descent of Jesus (a)

It is narrated from the Prophet (s) that Jesus (a) will descend beside the eastern minaret of Damascus which is now the location of Jami' al-Umawi and that the stone which Prophet Moses (a) hit in the mount Tur by his stick and twelve springs flew from exists beside that minaret.

Station of Ra's al-Husayn (a) 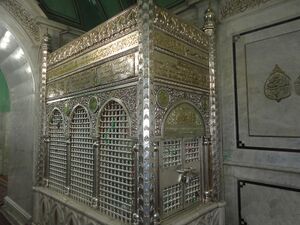 It is located after the mihrab and the mosque of Imam Zayn al-'Abidin (a) in a 3 by 4-meter room and inside its dome, the names of Imams (a) are written. Inside the station of Imam al-Sajjad (a), there is a very small room made of silver at the size of the head of a person made in the wall as a remembrance for the place of the blessed head of Imam (a). On the left side of this silver place, the hall or room mentioned earlier is separated by an iron door.

On the left side of it, there is a small darih made of silver in rectangle form in the size of 1 by 1.5 meters. Inside this place or darih, there is a column on top of which there is something in the shape of a head with a red covering made of either wood or stone.

Mihrab and Station of Imam al-Sajjad (a)

This blessed place has been visited and used by people to receive blessings during the past centuries. The place Imam al-Sajjad (a) used to pray is at the northeast of Umawi mosque, beside the east door which has been after a great hall and has a beautiful mihrab made of stone.

There are four mihrabs in the hall of Umayyad mosque, each of which belongs to each of the Four Sunni schools. One of them is in the middle, two other mihrabs are on the right side of this mihrab and the fourth mihrab is on the left of this mihrab. The middle mihrab which is the main one and bigger than others belongs to Maliki people. The right mihrabs belong to Hanafis and Hanbalis and the left mihrab belongs to Shafi'is. At the time of Mamalik, the four mihrabs were used by the leaders of the prayers.

The Place of Christians' Baptism

Half of the present mosque (the east half) was a church which was added to the other half at the time of Walid and the church was destroyed. In this half, twenty meters from the east entrance of the hall, there is the remaining cylinder and a well which they say that Christians used for the baptism of their children. This place has been respected by them. Currently, this well and its cylinders which are made of marble stone are there but the well is covered.