The Mosque of al-Shaykh al-Anṣārī, or Jami' al-Sahykh al-Anṣārī, known as the Mosque of Turkha (Turks) is a well-known mosque in Najaf. Imam Khomeini held the imamate of congregational prayers, and taught, in this mosque for thirteen years.

The mosque was built in the southern side of the Shrine of Imam 'Ali (a) in Huwaysh neighborhood with the support of al-Shaykh Murtada al-Ansari. According to an anecdote, an Iranian man who was a follower of al-Shaykh al-Ansari went to Najaf on his way to Mecca for performing the hajj ritual and donated some money to al-Shaykh al-Ansari so that he could built a house of his own. Al-Ansari accepted the money, but instead of the house, he constructed a mosque, which later came to be known as the Mosque of "Turks."

The Reason for Appellation as the Mosque of Turks

Since the mosque was a place for religious mourning ceremonies of Najaf-based Turks for over a century, it came to be known as the Mosque of Turks. 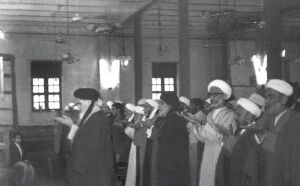 Since its foundation until the present time, the mosque has been a place for seminary lectures and discussions of seminary students and Shiite marja's in the Islamic Seminary of Najaf. Ayatollah Al-Sayyid Muhammad Kazim al-Yazdi taught in the mosque. Also, Imam Khomeini held the imamate of congregational prayers, and taught, in the mosque during his exile in Najaf.

At present, the Mosque of al-Shaykh al-Ansari is a center in which seminary courses (preliminaries, level 1, level 2, and advanced courses) are taught.