Holy Shrine of Imam Ali (a)

From WikiShia
(Redirected from Shrine of Imam 'Ali (a))
Jump to: navigation, search 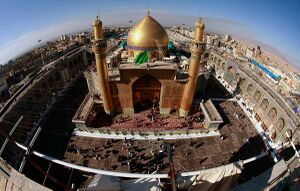 Currently, there is a magnificent structure which is comprised of four gates, five porches, a large courtyard and a darih. Following the collapse of Saddam Hossein and the presence of Iranians, the shrine is being expanded. Recently a large courtyard is being been built in the western section of the shrine, and it has been named after the Lady Fatima (a). It will increase the total area of the shrine to 140,000 square meters. Many faqihs and scholars are buried in this section.

"The concealment [of the grave and its location] was due to fear of their enemies, like the Umayyads and the Kharijites. This is because it was possible that they would try to find his grave and exhume his body, which would inevitably lead to a conflict with the Hashimite tribe. Through this, several people would be killed and it would cause a large fitna (conflict) in the Muslim community. The Imam (a) was extremely concerned with the well-being of the Muslim nation during his lifetime and made constant efforts to extinguish the fires of fitna. As such, it was to be expected that he would encourage the same line of thought and actions that he embodied throughout his life, to continue after his death and that he would want his family and followers to abandon what could be a source of conflict."[2]

Masjid al-Khadra' (lit. the Green Mosque) is located in the eastern side of the courtyard. This mosque was where Ayatollah al-Khoei taught his lessons. In fact, recently the wall between this mosque and the grave of Ayatollah al-Khoei, was removed and replaced with a window made from stained glass.[21]

In the upper floor of the courtyard, there are 52 rooms, each of which has a veranda facing the courtyard. These 52 rooms make up a seminary. Behind each room, there is a hallway that leads to a stairway (to exit the seminary). These rooms were used for classes and as a place to rest by students of the Islamic seminary. After the uprising of the Iraqi people in the month of Safar 1377/1958, the Baathist regime evicted the students of the seminary from these rooms with the intent of weakening and destroying the Shia seminary. From then on, these rooms have remained empty.[24]

The Maqam (stance of) Imam al-Sadiq (a) is a spot located near the door of Masjid al-Ra's. It has been narrated that this is where Imam al-Sadiq (a) would pray when he came to perform the Ziyarah (visitation) of Amir al-Muminin (a). This spot, approximately fifty years ago was covered by a white dome, spanning the area of approximately 100 square meters. However, currently, there are no remnants of this building and the spot is simply a part of the shrine.[25]

Mawdi' al-Isba'ayn (lit. the place of two fingers) is across the place where the face of the Imam (a) lies. It has been said that there was a tyrant ruler whose name was Murra b. Qays who was once speaking about his tribe and forefathers. He asked the elders of the tribe about those who had passed away from his family, and in response, they said that many of them had been killed in a battle. He further asked about who had killed them, and they responded by saying that most of them had been killed at the hands of Ali b. Abi Talib (a). So, he asked where Imam Ali (a) had been buried and was told that he was buried in Najaf. Murra then sent an army of 2,000 individuals to storm Najaf. After six days of defending their city, the people of Najaf were defeated and Marra entered the shrine and began to destroy it. As he was about to exhume the grave, two fingers came out of the Darih, and as though they were a sword, cut him in half. At that very moment, the two halves of his body became stone. These two stones were then kept near the road/pathway, after which the army took them and hid them.[26] 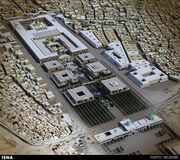