Mosque of al-Shaykh al-Ṭūsi (Arabic:جامع الشیخ الطوسی) is among the most famous and oldest mosques of Najaf and the burial place of al-Shaykh al-Tusi (d. 460/1068). This mosque is near the Shrine of Imam Ali (a) and has been the place for holding the classes of the seminary of Najaf since the past. It has been repaired and reconstructed several times. 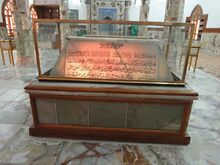 This mosque was in fact the house of al-Shaykh al-Tusi. After the attack on his house and burning his library in Baghdad, al-Shaykh al-Tusi took refuge in Najaf and resided in a house near the Shrine of Imam Ali (a). His house was the place for teaching and writing until after his demise and according to his will, he was buried there and it was turned into a mosque.

The family tomb of Bahr al-'Ulum is in the courtyard of the mosque, which contains the graves of Sayyid Muhammad Mahdi Bahr al-'Ulum (d. 1212/1797) and his children. Due to the old age of this mosque and construction of the street, the mosque has been repaired and reconstructed several times.

Since the time of al-Shaykh al-Tusi, this mosque has always been one of the centers for teaching the lessons of the seminary of Najaf and great scholars such as Akhund Khurasani and Sayyid Muhammad Baqir al-Sadr chose it for their classes.