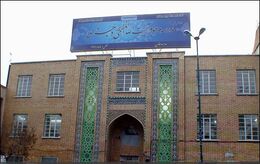 Ayatollah Burujirdi Seminary (Persian: مدرسه علمیه آیت‌الله بُروجردی, founded in 1123/1711), known as Khān Seminary (Persian: مدرسه خان) is an old seminary in Qom, located on the eastern side of the Shrine of Fatima al-Ma'suma (a), adjacent to a market known as Gozar-i Khan. The school was built in the Safavid period, and since it was reconstructed at the command of Ayatollah Burujirdi, it came to be known after him.

The school was founded in 1123 in the Safavid period by a person called Mahdi Quli Khan.[1] Located near the Shrine of Fatima al-Ma'suma (a), the school originally contained four chambers in one floor, which was ruined as time went by. 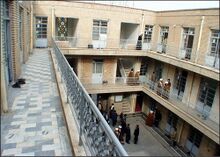 During the marja'iyya of Ayatollah Burujirdi, the school was reconstructed in three floors and numerous chambers. The construction began in Rajab 1378/January 1959 and ended in Shawwal 1379/April 1960.

At the command of Ayatollah Burujirdi, an independent library was built for students of the school as well as other schools. During his lifetime, many books were purchased for the library.

The school is endowed to seminary students, and until 2006, it mostly served as a dormitory. When Ayatollah 'Alawi Tabataba'i Burujirdi overtook its supervision, he changed it to an educational center. At his command, changes were made in the structure of the school, such as a ceiling for the school's yard, transformation of the school's chambers into classrooms. The complex has 34 classrooms now, and is a place for seminary lectures and discussions. Jurisprudence, principles of jurisprudence, Quranic exegesis, philosophy, and theology are taught at the school.