Mullā Fatḥ Allāh Kāshānī (Arabic: ملّا فتح الله کاشانی) (d. 988/1580) was a Shiite scholar and exegete of the Qur'an in the period of the Safavid king Shah Tahmasp I. His best-known work is an exegesis of the Qur'an, Manhaj al-sadiqin.

He wrote other works such as a translation and exposition of Nahj al-balagha and al-Tabrisi's al-Ihtijaj. He was a student of Ali b. Hasan al-Zawwari'i, the author of Tarjumat al-khawas, an exegesis of the Qur'an. There is a disagreement over the date of his death and his burial-place. Aqa Buzurg Tihrani believes that the most accurate account is that Kashani died in 988/1580.

Mulla Fath Allah Kashani was born in the early tenth/late sixteenth century. He was a scholar associated with the government of Shah Tahmasp I. Aqa Buzurg Tihrani refers to him as "Mawla l-Mufassir". He is also referred to as a theologian and jurist. Sources are silent about his life stories. It is believed by some people that he was very poor. In his Preface to Manhaj al-sadiqin, Abu l-Hasan Sha'rani introduces himself as Mulla Fath Allah's great grandson.

Aqa Buzurg cites different accounts of when Kashani died, and takes the most accurate to be 988/1580. Some people believe that he died in Kashmir, but the account was questioned by others, because there is no evidence for the claim. Moreover, his grave is located in Kashan in a street known as Mulla Fath Allah. The Kashmir account is said to involve a confusion with Mulla Fath Allah Shirazi who died in India. 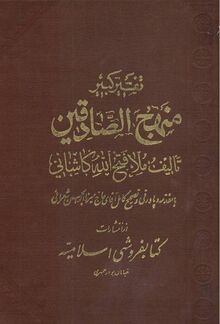 According to Aqa Buzurg Tihrani, the exegesis is a Persian book, written in three large volumes. According to Tihrani, Kashani wrote another exegesis of the Qur'an, Zubdat al-tafasir in Arabic in 977/1569 after Manhaj al-sadiqin and Khulasat al-manhaj. Kashani also wrote a Persian translation and exposition of Nahj al-balagha under Tanbih al-ghafilin wa tadhkirat al-arifin. He also translated al-Tabrisi's al-Ihtijaj into Persian. Mulla Fath Allah has allegedly wrote about sixteen other works as well.

The only teacher of Kashani mentioned in sources is Abu l-Hasan Ali b. Hasan Zawwari'i, the author of the Qur'anic exegesis, Tarjumat al-khawas. Mulla Fath Allah was his most prominent student. Zawwari'i was a student of al-Muhaqqiq al-Karaki, known as al-Muhaqqiq al-Thani. Kashani attended Ghiyath al-Din Jamshid Zawwari'i's lectures on the exegesis of the Qur'an. He also transmitted hadiths from Mir Abd al-Wahib Astarabadi.

Radi al-Din Shah Murtada (950/1543-1009/1600), the father of Mulla Muhsin Fayd Kashani, was a student of Mulla Fath Allah and had received a permission for the transmission of hadiths from him.