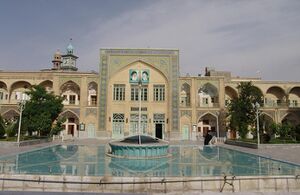 Fayḍīyya Seminary (Persian: مدرسه علمیه فِیضیّه) is among the important schools of the Seminary of Qom and major places for teaching Shi'a teachings in Iran. This school is located in north of 'Atiq courtyard of the shrine of Lady Ma'suma (a) and its construction is attributed to Shah Tahmasb Safawi according to the cornice on the south gate of the school. The current building is made by the order of Fath 'Ali Shah Qajar from 1213/1798-9 to 1214/1799-1800.

The school had an important role in the Iranian revolution and many speeches and demonstrations were made there. After the revolution, a basement was constructed under the school and its library was also fully reconstructed and expanded.

The main courtyard is 50*89 m2 and has four balconies in two floors. There are 40 rooms in the first floor and 40 rooms in the second floor as well. The portal, balconies and the cornice of the rooms are decorated by tiles.

It can be understood from the cornice of the south gate that the school is among the buildings of the time of Shah Tahmasb I[1].

According to authentic references, the first foundation of the school with the name of Astana School belongs to 6th/12th century and has been known with the same name until the end of 11th/17th century, but then it was known as Faydiyya and around the middle of 13th/19th century, the current building replaced the previous foundation. The current building belongs to the time of Fath 'Ali Shah and is built from 1213/1798-9 to 1214/1799-1800 when the previous building was destroyed and the school was expanded.

Courses of Changes for the New Building

At the time of Safavids, the school has been separate from 'Atiq courtyard of the holy shrine of Lady Ma'suma (a) and there has been a passage between them which can be seen in the maps of tourists of that time such as Shardan and Olearius.

At the time of Fath 'Ali Shah, different parts of the school were reconstructed and expanded. Back then, a dam was built over neighboring river and some of the lands gained was added to the school. In this expansion, the courtyard was expanded up to the entrance of the 'Atiq courtyard of the holy shrine of Lady Ma'suma (a) the south balcony of the school was built over the gate by Sayyid Taj al-Din al-Sharaf Musawi in 939/1532-3.

In 1370/1950-1, Ayatullah Burujirdi made a balcony in west side of the school which was dedicated to the book depository of the library and there were two reading halls built and attached to it.

It is said that the school has been named since al-Fayd al-Kashani who was among great scholars of Safavid time, and the son-in-law of Sadr al-Din al-Shirazi[2], taught in this school for a while and this school has been his teaching place or his permanent residence while he was in Qum. Therefore, This school became popular among people as the school of Fayd.

Some other believe that the name of school became widely known in Qajar period due to suggestion of the scholars. This justification sounds more probable considering the fact that Fayd Family had religious leadership of Qom during Qajar period.[3] The school has originally had an important library. In that library, Baha' al-Din al-'Amili dedicated some books to it in addition to the books Shah 'Abbas had previously donated to it.

Following Imam Khomeini's disclosing about the bill of States and Provincial Councils in 1963, the Six Bills, the White Revolution of Muhammad Reza Pahlavi, and announcing the Norouz of that year as public mourning. The second day of Farvardin of the same year which was the anniversary of the martyrdom of Imam al-Sadiq (a), Pahlavi agents accompanied with some gangsters attacked Faydiyya School and after students and clergies stood against them, they shot them and martyred many of them and injured many more. In this attack, some clergies were thrown down from the rooftop of the school and were killed. 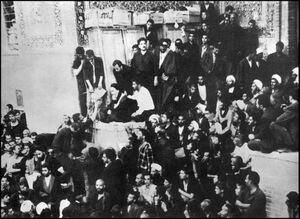 In the evening of 'Ashura, June 3, 1963, Imam Khomeini attended Faydiyya School and made a stirring speech in which he severely criticized Pahlavi regime and American and Israeli statesmen who had so much influence over Mohammad Reza Pahlavi.

The number of people attending that speech was so many that all the courtyard of Faydiyya, Dar al-Shifa, the courtyard of the holy shrine of Lady Ma'suma (s), Astaneh square and around that were full of people. Following the speech, in the morning of June 5, 1963, Pahlavi agents attacked Imam Khomeini's house, arrested him and transferred him to a prison in Tehran and then the protest of people on the same day happened in Qum.