Shaykhān Cemetery (Persian:قبرستان شیخان)is an ancient cemetery located near the Holy shrine of Lady Fatima al-Ma'suma (a) in Qom. It memorializes the lives of six notable scholars of different historical periods. Currently, over six hundred grand religious figures and scholars are buried there including Al-Mirza al-Qummi, Zakariyya b. Adam, Zakariyya b. Idris, Mirza Jawad Maliki Tabrizi and Ayatullah Fadil al-Tuni. 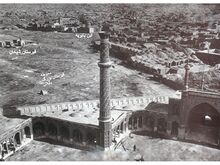 There is not enough information on the time when this cemetery was named as Shaykhan (literal meaning: two scholars). The name Shaykhan is not mentioned in any ancient historical documents. Based on sources, it can be said that it was recently named Shaykhan. Apparently the majority of Babilan Cemetery was destroyed due to expansion of city and constructions and the part where two famous hadith scholars, Zakariyya b. Idris and Zakariyya b. Adam remained harmless, then people called it Shaykhan (in Arabic it means two scholars). Shaykhan Cemetery was also called Al-Shuyukh Cemetery (literal meaning: cemetery of scholars) in a number of sources.

According to historical reports on Qom, Shaykhan Cemetery was present in the time of Twelve Imams as well, as a number of companions of Imams are buried there, including Zakariyya b. Adam al-Ash'ari and Zakariyya b. Idris who were companions of Imam al-Sadiq (a), Imam al-Kazim (a), Imam al-Rida (a) and Imam al-Jawad (a). They also narrated hadiths from them. In addition, Adam b. Ishaq the companion of Imam al-Hadi (a) along with other companion are buried in Shaykhan Cemetery. Based on Mirza 'Abbas al-Fayd, Fath'ali Shah was the first one who ordered to build a dome on the grave of al-Mirza al-Qummi which was later rebuilt.

In the past Shaykhan Cemetery was vast but due to constructions and expansion of the city, it was became smaller. As a result it can be said Shaykhan Cemetery was changed a lot during different historical periods and current domes were built in the time of Babilan Cemetery. Nowadays over six hundreds of religious scholars are buried there. All the cultural, social activities and rebuilding processes of Shaykhan Cemetery are carried away by Awqaf and Charity Organization of Qom.

A large number of great Shi'ite religious scholars are buried in Shaykhan Cemetery including Muhammad Taher al-Qummi a faqih in Safavid era and Mirza Abu al-Qasim Qumi known as al-Mirza al-Qummi a grand religious scholar in the time of Fath'ali Shah the Qajar ruler. Shi'ite religious scholars regarded Shaykhan Cemetery highly important and even sacred. Besides, a number of scholars including Ayatullah Kalbasi and Ayatullah Sayyid Ahmad Khwansari entered this cemetery bare-footed. In addition, it is quoted from Al-Sayyid Hashim al-Haddad that Shaykhan Cemetery is the most sacred and blessed place in Qom.