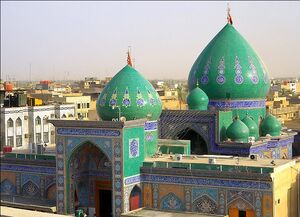 Al-Mukhayyam (Arabic: المُخَیَّم) or Tenting Ground is a building in Karbala visited by the Shi'as constructed in the place where the tents of Imam al-Husayn (a) and his companions were located in the Battle of 'Ashura. It was first constructed in the 10th/16th century.

Tent Burning is a mourning ritual held in Muharram. It is held in some cities of Iraq and Iran.

Order and Arrangement of the Tents

In the Battle of Karbala, Imam al-Husayn's (a) tents were arranged like a horseshoe to be better protected. A trench was dug behind the tents to prevent attacks from that side.[1] The first tent, which was set up, was that of Imam al-Husayn (a). It was the biggest tent in which meetings were held.[2]

Tents of Imam al-Husayn's (a) caravan amounted to 60, and the distance between each was about 2 meters, and the whole area in which the tents were located was 180 meters.[5]

The Plunder and Burning of the Tents

After the martyrdom of Imam al-Husayn (a), the enemy's army invaded the tents and plundered horses, camels, furniture, clothes, and women's pieces of jewelry. They competed over the plunder.[6] 'Umar b. Sa'd ordered that women be gathered in a tent, surveilled by some guards.[7] According to historical reports, all the tents were burned, and the tent in which Imam al-Sajjad (a) and women had gathered was the last one burned by 'Umar b. Sa'd's army.[8] There is a hadith from Imam al-Rida (a) concerning the tents according to which, "our tents were set on fire."[9]

On the southwestern side of the Shrine of Imam al-Husayn (a), there is a building called "al-Mukhayyam" which the Shi'as have for long visited. There is no report about the building in historical sources of the early and middle centuries. In old times, the al-Mukhayyam area was known as "Al 'Isa" district.[10] Al 'Isa is a group of 'Alawis whose lineage goes back to Zayd, the son of Imam al-Sajjad (a).[11]

The First Construction in al-Mukhayyam

According to sources, the first person who constructed a small building in al-Mukhayyam was Sayyid 'Abd al-Mu'min Dadi from the progeny of Sayyid Ibrahim al-Mujab, and a Sufi in the 10th/16th century. He planted a number of palm trees near the construction which was later known as Dadi Palms.[12] After him, a person called Jahan Kalami Karbala'i, a poet and a Sufi in the 10th/16th century, repaired and extended the building in 996/1587-8. The date of his repairs is inscribed on the marbles of al-Mukhayyam's mihrab.

Al-Mukhayyam in the Travel Book of a German Tourist

After the Wahhabi Attack

After the invasion of Wahhabis to Karbala in 1216/1801-2, Sayyid 'Ali Tabataba'i, known as the Author of Riyad, enclosed Karbala with walls and made 6 gates in different sides of the city.[14] After the building of the wall, al-Mukhayyam was located outside the old city. Thus, a building was constructed in it at the order of Tabataba'i, turning it into a cemetery.[15] However, Mirza Abu Talib Khan, the tourist, pointed in his travel book to the construction of a building in al-Mukhayyam in 1217/1802-3, attributing the order of the construction to the wife of Asif al-Dawla. He said that near the building, a portico was under construction which remained unfinished after Asif al-Dawla.[16] Some people hold that Asif al-Dawla's wife constructed the building under the supervision of Sayyid 'Ali Tabataba'i.[17]

In the Period of Naser al-Din Shah Qajar

A period in which al-'Atabat al-'Aliyat were significantly reconstructed and repaired is the period of Naser al-Din Shah Qajar by his representative in the reconstruction of Iraqi holy places, Shaykh 'Abd al-Husayn Tihrani, known as Shaykh al-'Iraqayn.

In Naser al-Din Shah's travel to al-'Atabat al-'Aliyat in 1287/1870-1, Midhat Pasha, the Ottoman ruler of Baghdad, constructed a building for the residence of the Iranian Shah and his companions in al-Mukhayyam.[18]

Construction of a New Gate near al-Mukhayyam 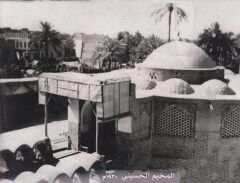 The Present Condition of al-Mukhayyam

Today, a place with an area of 2000 square meters is enclosed by walls on the southwestern side of the shrine, 250 meters away from its courtyard. In the middle of this area, there is a building like a big tent with 400 square meters.

In the middle of the building in the direction of Qibla is the place where Imam al-Sajjad (a) used to worship and say prayers. At the entrance, there is a big door leading to the ground of al-Mukhayyam (the Tenting Ground) with few stairs. After the entrance, there are 16 brick arcs like a palanquin on both right and left sides. They are intended to be symbols of 16 palanquins with which families of the Martyrs of Karbala were moved from there to Kufa. At the right end of the building, which is about 1.5 meters deeper, there is a chamber (which is approximately 20 square meters) which was the place where Ahl al-Bayt (a) worshipped. At the entrance of the Tenting Ground, there are poems by Sayyid Husayn 'Alawi Karbala'i inscribed on marbles.[22] Under the Tenting Ground, there is a well which is known as the well of 'Abbas (a) leading to the underground where there is water.[23]

After the fall of Saddam Hussein in Iraq, simultaneously with the reconstruction of other holy sites in Karbala, the old building which was constructed during the 13th/19th and 14th/20th centuries was reconstructed and developed. For example, a big dome and some small domes were constructed as symbols of each tent and a roofed courtyard was built in al-Mukhayyam. The last reconstruction project in al-Mukhayyam has been constructing some small darihs in some parts of it. These darihs are supposed to be set up in places attributed to the tents of Imam al-Husayn (a), 'Abbas b. 'Ali (a), Imam Zayn al-'Abidin (a), Zaynab bt. 'Ali (a) and Qasim b. al-Hasan.[24]

Position of Imam Zayn al-'Abidin (a)

The Ritual of Tent Burning

A mourning ritual of the Muharram month in Iran and Iraq is the one in which symbolic tents of Imam al-Husayn (a) and his companions are set up before the Day of Ashura. They are set on fire on Ashura at noon or in the afternoon. The ritual is held as a reminder of the burning of Imam al-Husayn's (a) tents after his martyrdom on the Day of Ashura and the elegies of his Ahl al-Bayt (a).[26]