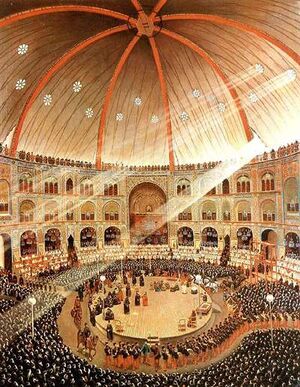 Taʿziya khānī (Persian: تعزیه خوانی) or Shabīh khānī (Persian: شبیه خوانی) is a religious play based on historical, tragic and epic events of Karbala and the martyrdom of the third Imam of Shi'as, Imam al-Husayn (a) b. 'Ali (a), his relatives and companions and the Household of the Prophet (s). Some scholars have said that performing such plays dates back to the time of Daylamites and it changed its form to the current style at the time of Safavids and reached its peak at the time of Qajars and then it was performed in some other countries. There are different opinions regarding the development and background of Ta'ziya.

Some believe that the first instances of Ta'ziya and Shabih Khani have been in regions north of Iran at the time of Daylamites and thinks that this form of play has come to that region and developed, by music players of Daylamite army, soldiers, people in business and pilgrims of Holy Shrine of Imam al-Husayn (a).

But after Daylamites, performing Ta'ziya was declined but it was revived at the time of Safavids. He also claims that there are manuscripts of the kind of Ta'ziya written at the time of 'Adud al-Dawla in the library of Madrid, Spain.

Ibn Jawzi (d. 597/1200-1) and Ibn Athir were the first historians who gave reports of religious gatherings of Shi'a; marching and 'Azadari [mourning] of people for Imam al-Husayn (a) in Baghdad; closing the markets and stopping business; reciting Nawha [eulogies] and hitting their heads and chests on the day of 'Ashura' 352/963-4.

In the events of 363/973-4, Ibn Athir briefly mentions a kind of play among Sunni residents of Souq al-Ta'am neighborhood of Baghdad and wrote that they had a woman get on a camel like Aisha and made up two men like Talha and Zubayr and made a play of battle of Jamal as if they were fighting companions of 'Ali (a).

Also, some have said that Shi'a people of Karkh in Baghdad made the Shabih play of the events of Karbala too and showed that Sunnites made such plays as mentioned against them. This kind of religious play were performed since the time of Daylamites and there is no report of that after Buyids but later at the time of Safavids, it returns in new form. Jean-Baptiste Tavernier mentioned Shabih plays about events of Karbala and showing them in mourning marches in front of Shah Safi (1038/1628-9 ; 1052/1642-3) in Naqsh Jahan square in Isfahan and described saddled horses of the martyrs and fake corpses of children in coffins being carried.

Salamon and Van Gogh mentioned the plays about the events of Karbala made on moving carts in 1152/1739-40 during the rule of Shah Sultan Husayn and the very short rule of Tahmasb II.

These two tourists' reports given in a German book titled as "Iran und der Schah von Irans Geschichte und Geographie in der Neuzeit" are the oldest document for the events of Karbala made as plays on carts.

Shabih khani developed to its current form since the time of Safavids and was later more developed.

Franklin, the orientalist who was in Iran at the time of Zandis gives a report of 'Azadari (mourning) sessions in Shiraz. According to this report, in the first ten days of Muharram, groups of youths with different signals played fights like the armies of Imam al-Husayn (a) and 'Umar b. Sa'd. Also, it talked about the play of pigeons with bloody bills which informed Medina about the martyrdom of Imam al-Husayn (a).

In this period, performing Ta'ziya had a fast development. Fath 'Ali Shah had a special interest in Ta'ziya. He appointed some courtiers to the management of mourning programs and Ta'ziya plays managed by the government in the month of Muharram and he himself attended in some performances of Ta'ziya, especially on the days of Tasu'a and 'Ashura'. Some courtiers and noblemen used to hold sessions of mourning and Ta'ziya in Takiyya (mourning halls) or in the yards of their houses.

James Justinian Morier, in his first logbook, a military and political agent of Britain in Iran, mentioned performance of three sessions of Ta'ziya before Fath 'Ali Shah: Ta'ziya plays of the children of Muslim b. 'Aqil, Bazaar of Sham and the martyrdom of Imam al-Husayn (a) on 8th, 9th and 10th of Muharram 1224/1809-10 and gave a brief description of each.

However, during 150 years of the Qajar rule in Iran, the rule of Nasir al-Din Shah (1264/1847-8 ; 1313/1895-6) was the period of Ta'ziya's development and glory in Iran, especially in Tehran. Nasir al-Din Shah showed so much interest about performing Ta'ziya and in every Muharram, if he was in Tehran, he would certainly go to government Takiyyas for watching Shabih Khani and if he was out of Tehran, he would go to local Takiyyas. He encouraged government agents and officials responsible in holding Ta'ziya sessions to make the sessions and plays more attractive.

Takiyya Dulat was the most important Takiyya for performing Ta'ziya at the time of Nasir al-Din Shah which was built by his order. This Takiyya was very influential in promoting Ta'ziya. There, actors of Ta'ziya were actually paid by government and acted before Shah and government officials under supervision of the court's Mu'in al-Buka'.

During the rule of Reza Shah, especially during the second decade of his rule, mourning programs of Muharram were restricted and different limitations were made to such programs. Therefore, formal performances of Ta'ziya were gradually stopped in Tehran but they continued to be held in villages.

During the rule of Muhammad Reza Shah, some gatherings of Ta'ziya were played on stage. In 1976-7, the International Assembly for Ta'ziya was held in Shiraz with participation of Iranian and foreign scholars of Ta'ziya and there, some Ta'ziyas were played. Peter J. Chelkowski published the proceedings of this assembly in New York.

After Pahlavi period, Ta'ziya was first declined but later on during recent years people and managers in cultural and art have become interested in it again and there has been an effort to conduct studies on the background of this religious art and purify it and prevent its extinction.

Ta'ziya plays have also proved interesting beyond Iran's borders in other countries. Alexandre Chodzko, the Polish Iranologist and consul of Russia in Iran (1246/1830-1 ; 1256/1840-1) was among the fans of traditional plays of Ta'ziya who attended mostly in Ta'ziya sessions held by the government and royalties. He was the first person who paid attention to the value of Ta'ziya Nama [script of plays] and bought the most complete collection of Ta'ziya nama for 33 sessions from Husayn 'Ali Khwaja, the mu'in al-buka' of the court of Fath 'Ali Shah who recited some of the poems in those Ta'ziyas.

Chodzko published two sessions of this collection with titles of Piyghambar Khuda [The Messenger of God] and Rihlat Piyghambar [Demise of the Prophet (s)] in 1852, and published 5 other Ta'ziyas translated in French in 1878 with a comprehensive and analytical introduction in a book titled as Le Theatre Persan.

In the introduction, Chodzko mentions a two-week performance of Ta'ziya in the house of Mirza Abu l-Hasan Khan, the first ambassador and foreign minister of Britain (1239/1823-4 ; 1250/1834-5) and writes:

"He had made a Nadhr [religious promise] to hold Ta'ziya for the healing of his son; so, fulfilled his Nadhr by holding a great performance of Ta'ziya in the yard of his house in Muharram 1249/May-June 1833."