Jump to content
(Redirected from Ta'ziya of al-Abbas (a)) 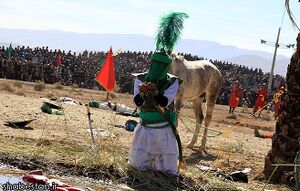 Taʿzīya of al-'Abbās (a) (Persian: تعزیه حضرت عباس (ع) is a ta'ziya of the First Ten Days of Muharram. This ta'ziya is performed on 9 Muharram, and is about the martyrdom of al-'Abbas b. 'Ali (a). The protagonist characters in the ta'ziya are Imam al-Husayn (a), al-'Abbas (a), Imam Ali (a), 'Ali al-Akbar (a), al-Qasim b. al-Hasan (a), Zaynab bt. 'Ali (a), and Sukayna bt. al-Husayn (a), and antagonist characters are 'Umar b. Sa'd, Shimr and the army of the enemy. In this ta'ziya, events such as the digging of a trench around the camps, al-'Abbas's (a) attempt to bring water from Euphrates, and his martyrdom, are narrated.

Al-'Abbas (26/647-61/680), known as "Abu l-Fadl" and "Qamar Bani Hashim", was the son of Imam Ali (a) and Umm al-Banin. He was the commander and standard-bearer of the army of Imam al-Husayn (a) in the Battle of Karbala. He supplied water to the army in Karbala. Thus, he is known by the Shi'as as "Saqqa" (a person who supplies water). On the Day of 'Ashura, he was ordered by Imam al-Husayn (a) to go the Euphrates River to bring water, but after filling the waterskin, he was martyred on his way back to the camp.

The ta'ziya of al-'Abbas (a) is performed in accordance with different versions, such as the well-known pieces written by Mir 'Aza, Mir Anjum, Zamina Qazvin (version of Qazvin), and Zamina Isfahan (version of Isfahan).

The ta'ziya of al-'Abbas (a), according to Mir 'Aza Kashani's version, begins with Shimr's paean: "O the king of the small army! look at the field!." After that, actors who play the roles of Imam al-Husayn (a), al-'Abbas b. 'Ali (a), 'Ali al-Akbar (a), al-Qasim b. al-Hasan (a) and Zaynab (a) recite poems with the same rhyme. The Imam (a) orders that a trench be dug around the camps, and al-'Abbas (a) starts to dig the trench by reciting a Persian poem which translates as: "O Lord! I am digging a trench – lest my sister be humiliated and miserable." 'Ali al-Akbar (a) and al-Qasim (a) also recite poems with the same rhyme. After that, the stories of 'Ali al-Akbar's (a) attempt to bring water, al-'Abbas's (a) conversation with Imam Ali (a), and the safe conduct are played. Al-'Abbas (a) will then enter the battlefield and finds his way through the enemies to the river. He then points to the faithlessness of the water. Sukayna (a) recites poems with the same rhyme in the camps. She says that we, the children, do not want water and thus, she asks her uncle to go back to the camps as early as possible. At the end of the ta'ziya, 'Abbas's (a) attempt to bring water, the martyrdom of 'Abbas, and Imam al-Husayn's (a) arrival on al-'Abbas's (a) corpse are played.

Ta'ziya of al-'Abbas (a), according to Mir Anjum's version, which is one of the longest versions of plays about al-'Abbas's (a) martyrdom, begins with 'Umar b. Sa'd's recitation of a poem which translates as "O the king! My heart is restless to kill you tonight," and then he challenges the Imam's (a) army to fight him in the presence of the Imam (a), which is followed by the Imam's (a) conversation with him. When the Imam (a) is disappointed of guiding 'Umar b. Sa'd to the right path, he covers his head with his robe and tells his companions that they were no longer under the pledge of allegiance to him. After this, the stories of some companions leaving the Imam (a), his conversation with Zaynab (a), 'Ali al-Akbar's (a) attempt to bring water, the entrance of Shimr, al-'Abbas's (a) sermon, his farewell to the household of Imam al-Husayn (a), and al-'Abbas's (a) martyrdom are played.

There are two groups of characters in the ta'ziya of al-'Abbas (a): the saints as symbols of the good and their enemies as symbols of the evil. The actors of the roles of the saints are called "Muwafiq-khwan" (protagonists) and the actors of the roles of their enemies are called "Mukhalif-khwan" or "Ashqiya'-khwan" (antagonists).

Antagonists of the ta'ziya include the following: