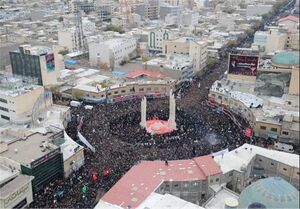 One of the biggest mourning processions, on Muharram 8, in streets around a Husayniyya in Zanjan, Iran, in which around 500 thousand people participate.

Mourning Procession (Persian: دسته عزاداری) is a ritual in which a group of mourners hold a procession in alleys and streets to display their lamentation for the Shiite Imams, especially Imam al-Husayn (a). Mourning processions are held with recitation of elegies (Nawhakhwani), self-flagellation, and chest-beating. Such processions are held in different countries, such as Iran, Iraq, Lebanon, Nigeria, etc. Some non-Shiite Muslims also attend such processions. In different areas, there are different traditions and practices for mourning processions. 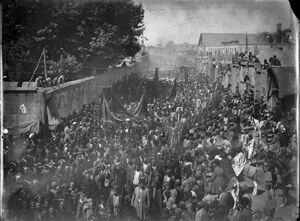 Historical photo of a mourning procession in the day of 'Ashura in Tehran, Iran, at the time of Qajar

A mourning procession is a ritual in which groups of people mourn Imam al-Husayn (a) and other Imams (a) by holding a procession and reciting some poems in streets and alleys.

There is no historical sources about group mourning in alleys and streets in the first three centuries after Islam. This might be a result of the Taqiyya (precautionary dissimulation) of the Shi'as and the suppression of Shiite ceremonies and rituals by rulers. The first public group mourning in the form of public procession in alleys was reportedly held in the Buyid period. On Muharram 10 of 352/February 8, 963, in the period of Mu'izz al-Dawla al-Daylami, the Shi'as of Baghdad closed their shops and wore black clothes as a sign of mourning. They then moved within the city while beating their heads, faces, and chests to mourn Imam al-Husayn (a). After that, group mourning in alleys and streets became popular in the Buyid period. Such mourning ceremonies, as well as other rituals led to quarrels between the Shi'as and some Sunni Muslims (particularly Hanbalis).

When Shi'ism was announced by the Safavids as the official religion in Iran, mourning ceremonies of Imam al-Husayn (a) in the form of mourning processions became much more popular. Pietro Della Valle, the Italian travel writer, pointed, in his report of the mourning ceremony in Muharram, 1026/January-February 1617 in Isfahan, to huge mourning processions in which different weapons and turbans were carried on horses together with camels which carried boxes with 3 or 4 children on each as signs of the Captives of Karbala.

In the Pahlavi period under Reza Khan, public mourning of Imam al-Husayn (a) was banned in Iran.

In the Muharram month, mourning processions are held in alleys, streets, as well as bazaars of cities and villages in Iran. Mourning processions throughout Iran are marked with Nawhakhwani, chest-beating, self-flagellation, moving a banner around, and giving foods to others as religious vows (nadhr). In some areas, other rituals are also held along with mourning processions, such as Sinj and Damam, Tughbandan, 'Alamgardani (moving the 'Alam), Nakhlbandi (tying the palm), Palm-Carring, Mash'algardani (moving torches), Sangzani, caravans of people in green and red, the parade of camels with palanquins as signs of the Caravan of Karbala and the Captives of Karbala, Karnazani (playing the trumpet), Bahrshahid, and Parsa Ritual.

In Iran, mourning processions are not limited to the Shi'as. Some Sunni residents of Sistan and Baluchestan Province hold mourning processions of their own to mourn Imam al-Husayn (a). In some Iranian provinces, such as Tehran and West Azerbaijan, religious minorities, including Christians, attend mourning ceremonies.

Mourning Processions in Other Countries 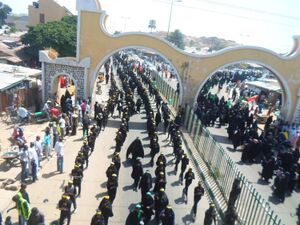 In different Shiite countries, mourning processions in alleys and streets constitute one of their main religious ceremonies. After the recitation of elegies in Iraq, the mourners stand beside one another and mourn in well-organized groups. On the eve of Tasu'a, they make torches from branches of the palm tree, move them around and mourn until the morning of the Day of 'Ashura.

The mourners trot to Karbala at noon. In Lebanon, people in Shiite areas, such as Dahieh and Beqaa, wear black clothes throughout the First Ten Days of Muharram and attend a public procession in the afternoon of Tasu'a and the rituals of the Day of 'Ashura. In Samarkand, Bukhara and Tashkent in Central Asia, the rituals and practices of the Shi'as in Muharram include the installation of a black flag and a ceremony known as "Matam Imam" (the mourning of the Imam). People in Indonesia hold processions and mourn Imam al-Husayn (a) in streets and public sites. In the days of Muharram, Muslim men wear black clothes and Muslim women avoid makeup, no wedding is held, and people do not buy new clothes. Mourning processions are also held during Muharram in other Asian countries, such as Pakistan, India, Malaysia, Thailand, and Myanmar.

Shiite mourning processions are held in streets during Muharram in some African countries, such as Nigeria, Algeria, and Tunisia. In Tunisia, people visit the graves of the dead on the morning of the Day of 'Ashura, where they pay tributes to the Martyrs of Karbala. Some of them light fires in different places. They believe that this will delight the children of Imam al-Husayn (a) in Karbala.