Jump to content
(Redirected from Ta'ziya of Ali al-Akbar (a))

Taʿziya of ʿAli al-Akbar (a) (Persian: تعزیه علی اکبر (ع)) is among re-enactments of the first ten days of Muharram. The topic of this re-enactment which is usually performed on Muharram 8th is the martyrdom of 'Ali al-Akbar (a).

'Ali b. al-Husayn b. 'Ali b. Abi Talib (a) known as 'Ali al-Akbar (a) was son of Imam al-Husayn (a) who was born in Medina in 33/654. It is said that he (a) was so much like the Prophet (s) in appearance and disposition. Ali al-Akbar exhibited great valor and sacrifice in the Event of 'Ashura and was martyred in the battle with the army of Yazid. According to hadiths, he (a) was the first martyr of Banu Hashim on the day of 'Ashura. His grave is beside the grave of his father in Karbala. 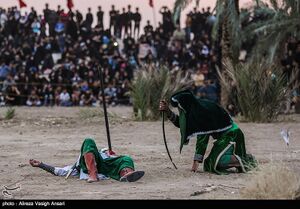