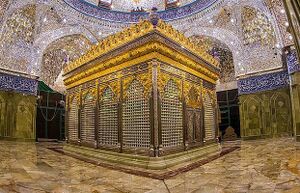 In 66/685, al-Mukhtar al-Thaqafi, with the help of some Arabs and Iranians who were Shia of Imam Ali (a) made an uprising to take revenge for Imam al-Husayn (a) and during his rule and government (by him or other Shia), the first building for the shrine was built and gradually, this building and the whole city was developed, but in 170/786-7, Harun al-Rashid ordered to destroy it.

al-Ma'mun who took power in 198/813-4, began a friendly relation with Shia; thus, Shia used this opportunity and the second building of the shrine was built at the time of al-Ma'mun. In 232/846-7, al-Mutawakkil became the caliph. He ordered to destroy not only the Shrines of Imam al-Husayn (a) and al-'Abbas (a) but the whole city of Karbala. After destroying the city, he ordered to plow the whole area and fill it with water.

After the establishment of Jalayirid government in Iran, when Shaykh Hasan Ilkani came to power in 740/1339-40, Sultan Uways (Shaykh Hasan's son) began repairing the shrine, which finished in 786/1384-5 and many gifts were sent to the shrine through Iran.

Shah Isma'il Safavi victoriously entered Baghdad on Jumada II 25, 914/ October 21, 1508 and was well received by Shias. The next day, he went toward Karbala and sat in the Holy Shrine of Imam al-Husayn (a) for one whole day. He then went to the shrine of al-'Abbas (a) and ordered extensive repairs on the shrine. He also gifted twelve cylinders of pure gold he had brought from Iran to the shrine of al-'Abbas (a). He ordered to cover the floor of the whole shrine with valuable silk carpets woven in Isfahan and employed a special team of servants to maintain and light the cresset of the shrine whose descendants are known today Karbala as Al Qandil. Isma'il Safavi also ordered the tiling of the dome as well, which was remaining until 1302/1884-5.

After the attack of Wahhabis to Karbala, the people of Iran, with the help of the government at the time of Fath Ali Shah Qajar made a great donation to the city and repaired all the destructions Wahhabis had made. The shrine of al-'Abbas (a) was also repaired, and the silver Darih Fath Ali Shah had gifted was installed in 1227/1812-3. 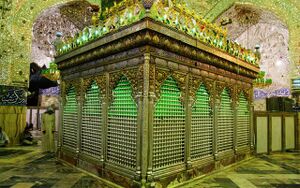 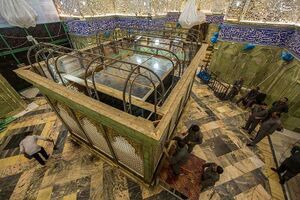 The shrine of al-'Abbas (a) is located 378 meters northeast of the Holy Shrine of Imam al-Husayn (a) and Bayn al-Haramayn is the place connecting the two shrines. The burial place of al-'Ababs b. Ali (a) is located in the middle of the shrine, and over it, a gifted exquisite Khatam box is placed on which some repairs have been made over time.

Over the box, the silver darih is placed, which was made during three years by Iranian artists and the help of Sayyid Muhsin al-Hakim and was installed in 1385/1965-6. The new darih was made using four hundred thousand Mithqals (a unit of mass equal to 4.25 grams) of pure silver and eight thousand Mithqals of gold. There are four symmetric rawaqs at the four sides of the shrine, which are joined at their ends. The ceiling and all the walls of the shrine and rawaqs have mirror-works on them made by Iranian artists. Over darih, a great dome is built gold plating which was finished in 1375/1955-6.

The shrine of al-'Abbas (a) has four rawaqs that surround darih from four sides: the north rawaq is used to enter the basement and the holy grave and it is said that it has been overlooking 'Alqama Stream. The south rawaq having three doors opened to the golden portico.

The area of the courtyard of Abu l-Fadl's (a) shrine is 9300 square meters and the area of the whole shrine, including rawaqs, the place under the dome and the portico, is 4370 square meters. The great courtyard has four porticos. At the top of the north portico, there is an epigraph that includes the date 1304/1886-7. The courtyard has four sides and on each side, there are small rooms which are totally 75. Over the shrine of Abu l-Fadl (a), there is a dome with a diameter of 12 meters different from other domes. It is a semi-circle dome with a sharp tip and a taller bottom from which windows with arches and sharp tips open outside. Inside the dome, in the bottom part is dark purple on which verses of the glorious Qur'an are written in white.

In 1375/1955-6, the dome was gold-plated. In that year, al-Shaykh Muhammad Khatib sent a telegram to the prime minister of Iraq, Muhammad Fadil Jamali, and asked to plate the dome with gold. Consequently, gold-plating the dome was done, and based on documents available in Awqaf management of Karbala, 6418 bricks of gold have been used on the dome. In the interior of the dome, some verses of the Qur'an are inscribed with mirror-works. The height of the dome is 39 meters from the ground.

In the shrine of al-'Abbas (a), there are precious articles that are priceless, including precious carpets, carpets woven by gold threads or having gems, golden chandeliers, inlaid swords, golden clocks, clocks made of ebony woods and alike. Management of the shrine is among important positions between the time of Buyids and Safavids and at the time of Safavids, it became much more important. Since the 10th/16th century, some people living in Karbala had orders from Safavid kings to manage the shrine. During the rule of Ottomans in Iraq, names of some managers and servants of the shrines of Imam al-Husayn (a) and al-'Abbas (a) were registered in a special record. However sometimes, when the managers are Sayyid, they also have the position of leadership of Alavis and thus become the ruler of Karbala and sometimes they are only managers of the shrine and the leader of Alavis would be someone else. Only towards the end of the rule of Safavids and the beginning of the rule of Ottomans over Iraq, there were non-Alavi managers for the shrine.