The Arabic word "al-Masjid al-Haram" is a descriptive phrase. "Masjid" means mosque, and it is described as "Haram" because some acts which are not forbidden in other mosques are forbidden (haram) in this mosque, because this mosque should be respected in a special way. Moreover, committing sins in this mosque is doubly wrong, and according to some sources, even the intention to do a sinful action in this mosque counts as equivalent to doing that action.[1]

The phrase "al-Masjid al-Haram" has also been used in the Qur'an and hadiths to refer to the Ka'ba, the city of Mecca and the whole sacred area called "haram."[2]

Al-Masjid al-Haram has long been a sacred and respectful place for people of Hijaz. It is not historically known when it found such prestige. According to religious and local accounts, the place was venerated since the genesis of the Earth. And according to hadiths, al-Masjid al-Haram is the most venerable place on Earth.[3]

According to local accounts, the mausoleums of seventy prophets, including Hud (a), Salih (a) and Isma'il (a) are located in al-Masjid al-Haram.[5]

Al-Masjid al-Haram has undergone many events, restorations, reconstructions, and expansions as witnessed by sources of history and hadiths.[8] Here are some important ones:

Before Islam, the area of Ka'ba with the area around it was called al-Masjid al-Haram.[9]

In this period, al-Masjid al-Haram had no walls or buildings; it was just an area in which the Ka'ba was located. It is not historically known exactly when the area was recognized as a mosque, but there are some hadiths in this regard. According to these hadiths, the current location of al-Masjid al-Haram was chosen before the creation of human beings and the Ka'ba was built by angels.[10]

Before Qusayy b. Kilab b. Murra b. Ka'b, the fourth ancestor of the Prophet (s) and the head of Quraysh, people of Mecca did not build houses near al-Masjid al-Haram. However, Qusayy encouraged people to build houses near the Ka'ba, though with a certain space that allows tawaf (circumambulation around the Ka'ba).[14]

The first change in the area of al-Masjid al-Haram occurred in the period of the Second Caliph. He purchased some houses around it and attached them to it. A short wall was built around the mosque,[15] with some candles on them to illuminate the mosque.[16]

Since the number of pilgrims increased, the Third Caliph destroyed more houses around al-Masjid al-Haram and attached them to it; he also built a porch and a ceiling for the mosque.[17]

Al-Walid b. 'Abd al-Malik (reign: 86/705 - 96/714-5) added an area of 1725 square meters to al-Masjid al-Haram and reconstructed it. He built porches around it with large pillars. The pillars were nicely decorated and partly gilded. Al-Walid made a golden downspout for the Ka'ba that is still known as the golden downspout.[18]

Al-Mansur al-'Abbasi, the second Abbasid caliph, (reign: 136/753-4 - 158/774-5) doubled the area of al-Masjid al-Haram in 137/754-5, adding an area of around five thousand square meters to its northern and western sides. He also made porches around it, built a minaret in its western side, and made more decorations on its walls and pillars.[19]

In 164/780-1, al-Mahdi al-'Abbasi expanded al-Masjid al-Haram from its southern part as well in order to turn the whole mosque into a square at the center of which the Ka'ba was located. Thus 6,560 square meters were added to the area of the mosque, porches were built around it, and pillars were made. These pillars are still there with the al-Mahdi's inscription on them.[22]

In 1368/1948-9, the King 'Abd al-'Aziz Al Saud issued an order to expand al-Masjid al-Haram in all its sides. The expansion began in 1375/1955-6 and the area of the mosque was expanded to 160,861 square meters. The area was intended for a population of over three hundred thousand worshippers. The doors of al-Masjid al-Haram were increased to sixty-four ones.[26]

The Ka'ba is the well-known cube-shaped building at the center of al-Masjid al-Haram in Mecca. It is the qibla of Muslims and their most important place of worship. It is obligatory for Muslims to visit the place as part of the hajj rituals at least once in their lifetime if they meet some conditions such as the financial ability.

The Black Stone (al-Hajar al-Aswad) is a sacred stone with an old history and a special place in the Islamic culture and hajj rituals. It is located on the eastern side of the Ka'ba (also known as al-Rukn al-Aswad, that is, the black side, or al-Rukn al-Hajari, that is, the stone side), 1.5 meters higher than the ground.

Maqam Ibrahim is a stone on which Ibrahim (a) is believed to had stood, when he was reconstructing the Ka'ba, in order for his hands to reach the upper parts of the wall. On one account, the stone used to be inside the Ka'ba before Islam, but when the verse "make Maqam Ibrahim [the place where Ibrahim (a) stood] as a place of prayer" [28] was revealed, the Prophet (s) ordered it to be taken out of the Ka'ba and put around it. 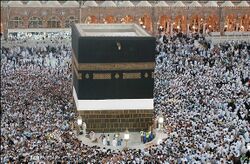 Hijr Isma'il is the space between the Ka'ba and a half-circled wall extending from the northern part of the Ka'ba (al-Rukn al-'Iraqi) to its western part (al-Rukn al-Shami). Some called it Huzayra. When Ibrahim (a), Hajar, and their infant, Isma'il (a), entered the area of Mecca, Gabriel guided them to reside where Hijr is now located. Then Hajar and Isma'il dwelled there under a canopy, made of woods, with their sheep. After their death, both Hajar and Isma'il were buried there. Hijr Isma'il was venerated before Islam. After his Bi'that, the Prophet (s) sat in this place, worshiped, recited the Qur'an, and answered people's questions there. According to the majority of Imamiyya jurists, and by an appeal to reliable hadiths, Hijr Isma'il is not part of the Ka'ba, but also it is not a part of al-Mataf, so it is not permissible to perform tawaf through it.

The space between the side of the Black Stone and the door of the Ka'ba is called al-Hatim. It is mentioned in the narrations that this is the best place in al-Masjid al-Haram.[29] It is called as such because people gather there for supplication and press each other.[30] Al-Multazam is between al-Rukn al-Yamani and al-Mustajar. This is called "multazam" (the place held or adhered by people) because hajj pilgrims stand there and hold to the wall and recite their prayers and orisons. According to some hadiths, the Prophet (s) put his face and hands on this part of the wall. He is reported as having said that God listens to people's prayers in this place. One recommended action in this place is to confess one's sins to God and ask for His forgiveness.[32]