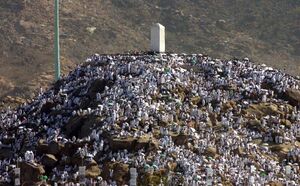 In some travel logs, there are mentions of a mosque and a dome called Umm Salama in 6th/12th century at the top of this mountain. This mosque was later stone-laid in 1073/1662-3 in the rule of Sultan Muhammad 'Uthmani (1058/1648-9 ; 1099/1687-8). This mosque was overlooking 'Arafat and there was a wall in the direction of Qibla wherein some mihrabs were built. On the left of this mountain toward the Ka'ba, there was an old house attributed to Prophet Adam (a) and on the left of this house, there were rocks about which there reports of the Prophet's (s) staying.

Staying of the hajj pilgrims near Jabal al-Rahma required bringing water to this place for hajj pilgrims in later periods. Zubayda (d. 216/831-2), wife of Harun al-Rashid, ordered digging of a subterranean aqueduct from Nu'man spring to 'Arafat and Jabal al-Rahma and from there, they opened a channel so that water reached 'Arafat basin. To climb this mountain easily, some stairs were built on its sides which were 17 on one side and 10 in other two sides.

Surur b. Musa'id, ruler of Mecca in 1186/1772-3 built an elegant palace at the feet of the mountain which was unmatched before and after it and there are reports in 1377/1957-8 about its ruins. Nasir Khusru mentioned an unknown person as son of Shad Dil, Emir of Aden and has mentioned building of a penthouse on top of this mountain which had many lamps and candles lit on its dome. According to his report, this building could be seen from two Farsangs (leagues) away. According to one report, the Prophet (s) gave the sermon of Hajjat al-Wida' on Dhu l-Hijja 9, 10/March 7, 632 and later Imam al-Husayn (a) recited the supplication of 'Arafa near this mountain.