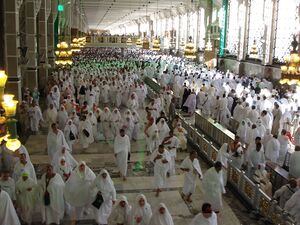 Al-Safa and al-Marwa are two small mountains adjacent to Masjid al-Haram. The distance between the two mountains, called "Mas'a", is about 395 meters. The mountains, al-Safa and al-Marwa, used to be taller and larger, but they came to be smaller after the expansion of Masjid al-Haram. Today al-Safa is about 8 meters tall and a little part of al-Marwa remained, but in 1995-6, it was removed in order to expand the area around which pilgrims walked, and a door was opened to the outside at the end of al-Marwa. Today only a trace has remained from al-Marwa.[1]