From WikiShia
(Redirected from The Black Stone)
Jump to: navigation, search

The Black Stone or Al-Ḥajar al-Aswad (Arabic: الحجر الأسود), is an ancient sacred stone in Islam. It is located in the eastern corner of the Ka'ba (known as al-Rukn al-Aswad, (the Black Angel) or al-Rukn al-Hajari (the Stone Angle), 1.5 meters above the earth. The Stone was honored before Islam. Nevertheless, even then, when the worshiping stones was customary at the age of ignorance, it was not worshiped,[1] but it was a symbol of monotheism and rejection of polytheism. The Black Stone was called by the name because of its color. Some have also called it al-Hajar al-As'ad, meaning "the Fortunate Stone".[2] According to Ibn Zahira, if aswad is taken to be derived from "sawdad" (grandiose), al-Hajar al-Aswad means the stone that is grander than other stones.[3] 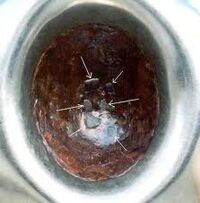 The Black Stone is a soft, quasi-oval stone. It is black, with red and yellow tints.[4] It is said that its extreme darkness is due to the burning of the Ka'ba, once before Islam and the second after at the time of the Yazid b. Mu'awiya.[5]

The Stone has been attacked and crushed several times by different groups. The pieces have, then, been put in an adhesive mortar. Therefore, it is not easy to give an accurate and detailed description of the stone. Because of the adhesive mortar around the stone, now only eight pieces can be seen, the largest of which is only as big as a date. It is said that they are actually fifteen pieces, seven of which are hidden in the brown mortar.[6] Clearly the stone has become softer and it has changed its color after centuries of being touched.

A nineteenth century western traveler to Mecca has given this description of the Black Stone: "[the Stone] is an irregular oval, about seven inches in diameter, with an undulated surface, composed of about a dozen smaller stones of different sizes and shapes, well joined together with a small quantity of cement, and perfectly smoothed: it looks as if the whole had been broken into many pieces by a violent blow, and then united again."[7] This mixture of stone and mortar has been put in a silver oval frame. The first frame for the Black Stone was made by 'Abd Allah b. al-Zubayr. Other caliphs, princes, and rich people followed him in making silver or gold frames. The last silver frame before the Saudi rule was made by Sultan Muhammad Rashad Khan in 1331/1912-3. In 1336/1917-8, King 'Abd al-'Aziz renovated part of this frame. In 1375/1955-6, King Sa'ud replaced that frame with a new silver frame.[8]

In hadiths, especially the ones reported by Shi'as, the Black Stone has been mentioned frequently (with the term "al-hajar"). It is, for example, said that the Black Stone was originally one of the angels that had entered the divine covenant; so God had made that angel a faithful guardian of the creatures and had deposited the covenant of all the servants with him. God, then, called all the creatures to renew their oath with this angel of the covenant. God has set that angel in Adam's (a) company in order to remind him of his oath and covenant. But when Adam (a) disobeyed God and fell out of heaven to the earth and repented, God sent down this angel as a white gemstone so that it could remind him of his forgotten oath. Adam (a) took this white gemstone to Mecca and put it in the place were the covenant had been made, at the time of the first construction of Ka'ba. In the Day of Judgment, the Black Stone will be a testimony to those who have renewed their covenant.[10]

According to yet another hadith, the Black Stone was deposited in Mount Abu Qubays. But when Abraham (a) and Isma'il (a) reached a point in the construction of the Ka'ba when they should put the Black Stone, it was returned to them.[11]

According to some hadiths, when Abraham (a) was building Ka'ba, Gabriel (Jabra'il) brought this stone from heaven so that it could stand in a corner of the Ka'ba and become an axis for circumabmulation (tawaf).[12]

It is also said that the Black Stone was in the beginning whiter than milk and brighter than the sun; but it became dark after the polytheists touched it[13] and the believers sinned.[14]

Based on hadiths, jurists believe that the beginning and end point for the rounds of circumambulation (tawaf) is the Black Stone. Touching and kissing the Stone is recommended.[16]

In hadiths, it is suggested that pilgrims supplicate (du'a) near the Stone, touch, and kiss it, and renew their covenant on the unity of God and the truth of the message of the Prophet (s), in the testimony of the Black Stone.[17] According to a hadith from the Prophet (s), the Black Stone represents God's right hand on earth, so touching it is equal to touching God's hand and pledging allegiance with Him.[18]

According to al-Azraqi, the second caliph 'Umar, once suggested that he knew that touching the Black Stone did not benefit or hurt him, but he did it simply because he had seen the Prophet (s) do it. In Shi'a sources, a response by Imam 'Ali (a) has been reported. It is stated by Imam 'Ali (a) that the Black Stone testifies to the allegiance of people on the Day of Judgement.[19]

When the Ka'ba was being renovated some time before the Prophet (s) started his mission, every branch of Quraysh tribe wanted to have the honor of setting the Black Stone in the Ka'ba. They were on the verge of having a bloody battle. But the young Muhammad made a plan so that all of them could be honored equally.[20] (See: Placing al-Hajar al-Aswad (Black Stone))

When 'Abd Allah b. al-Zubayr and his followers took refuge in al-Masjid al-Haram in 64/683-4, the Ka'ba was attacked by the army of Yazid b. Mu'awiya, and parts of it were burned. Consequently, the Black Stone broke into three parts, which were eventually put together in silver by 'Abd Allah b. al-Zubayr.[21] It is said that he was the first person to do this.[22]

The silver binding of the Black Stone, which had been built by 'Abd Allah b. al-Zubayr, was worn out over time. Fearing any damage to the Stone, Harun al-Rashid (d. 193/808-9) had the stones around pierced by diamond and had the holes filled with silver.[24]

In the year 317/929-930 in the Qaramitah rebellion, which happened in Mecca, under the command of Abu Tahir al-Qarmati, the Ka'ba was attacked. The Black Stone was crushed into pieces. Abu Tahir took the pieces to his own land, Hajar (modern Ahsa'). Until 339/950-1, when the Black Stone was returned to Ka'ba,[25] people had to touch its empty place.[26]

There are different reports about the Black Stone's return to the Ka'ba.[27] It has, for example, been said that the Abbasid caliph al-Muti' bi-Allah took it for thirty thousand dinars.[28] But this report is probably false.[29] According to another story, Bajkum the Turk (al-Makani) who governed Baghdad at the time of al-Radhi bi-Allah and al-Muttaqi bi-Allah, offered the Qarmatis fifty thousand dinars for the Black Stone but they refused the offer.[30] But some scholars such as al-Kurdi have rejected the opinion that the Qarmatis exchanged the Stone for money.[31]

After the death of Abu Tahir al-Qarmati, the Qarmatis were disappointed of reaching their goals. Therefore on Eid al-Adha of the year 339/951, Sanbar b. al-Hasan al-Qarmati took out the Black Stone, which was until then kept in a silver cover, uncovered it in the presence of the governor of Mecca, and put it back in its place within the silver cover.[32] A few months later, the guardians of the Ka'ba took out the Stone from its place, and fastened it with a new silver frame. This frame was taken out in the year 585/1189-90 by the governor of Mecca, Dawud b. 'Isa al-Hasani.[33]

In the year 363/973-4, a Roman man was commissioned to steal the Black Stone. He was disguised as a poor man. When only two people were around the Ka'ba, he went near the Black Stone and damaged it with his hatchet. When he was about to make another damage, a Yemeni man, who was circumambulating, stabbed him. Then people around gathered and took him out of al-Masjid al-Haram and burned him on stake.[34]

In the year 413/1022-3, another man damaged the Black Stone with a mace. It was crushed and its pieces fell on the ground.[35] According to Ibn al-Athir, this man was an Egyptian pagan who was later put on stake together with some of his friends.[36] Then, Banu Shayba gathered the small pieces of the Stone and put them together.[37] Al-Kurdi refers to Al-Rihla al-Hijaziya that this event happened in the year 411/1020-1, when a Fatimid governor sent this man with the aim of diverting people's attention from the Ka'ba to his own mosque in Cairo.[38] In the year 990/1582-3 a non-Arab man damaged the Stone with a mace and was killed on spot.[39]

When the Ka'ba was rebuilt by the Ottoman Caliph Sultan Murad in 1040/1630-1, the Black Stone was crushed into four pieces. Then, after several experiments, certain materials were mixed to make a glue to hold the pieces together and put the Black Stone in place.[40]