Mecca (Arabic: مکة) is the holiest city for Muslims where Prophet Muhammad (s) was born and Islam was appeared. This city is located in Arabian Peninsula, Arabia. Bakka, Balad al-Ḥarām, Balad al-Amīn and Umm al-Qurā are the other names of this city.

Ka'ba, the Qibla of Muslims is located in Mecca and every year millions of Muslims visit it in order to perform Hajj. Masjid al-Haram, 'Arafat, Mash'ar al-Haram and Mina are the most important religious and holy places in the city.

The population of Mecca increased in the 10th/16th century. A large number of Shi'ite scholars were living in Mecca during different historical eras. In the time of Al Sa'ud, Shi'ites have faced restrictions in performing their religious rituals because of anti-Shi'ite approaches of Wahhabis. Shi'ites are also economically under pressure.

The famous name of this city is Mecca. The name is also mentioned in the Quran:

"It is He who withheld their hands from you, and your hands from them, in the valley of Makkah, after He had given you victory over them."[1]

Different reasons have been mentioned on designation of this city as Mecca; its most important ones are:

Mecca has been famous for different names throughout history and some of them were mentioned in the Holy Quran:

Before the emergence of Islam, Mecca was important for having Ka'ba and for being on the way of merchants who traveled from from Yemen to Syria, Palestine and Egypt; they did trades in Mecca. Although Quraysh were conducting their trades only in Mecca,[8] Hashim b. 'Abd Manaf started developing trading with regions around Mecca. Hashim and his brother, 'Abd Shams and Nawfal managed to attain permission for doing trades from the rulers of Syria, Yemen, Abyssinia and Iraq. Then Mecca turned into a prominent trading city.[9] Quraysh merchants gathered around mostly in a market called 'Akkaz near 'Arafat during Dhu l-Qa'da.[10]

According to narrations, the significant religious events before the emergence of Islam in Mecca were:

In the time of Prophet Muhammad (s):

During this time a number of important historical and religious events took place in Mecca including:

In the time of Umayyad dynasty:

In the time of Abbasid dynasty:

In the time of Fatimid and Sharifs of Mecca:

In the time of Mamluk rulers and Ottomans Empire:

In the time of Saudi Family:

Mecca is regarded with great significance and respect among Muslims because of the presence of religious and holy places in the city including Ka'ba, Masjid al-Haram also Hajj is annually performed in this city. In addition, religious leaders always encouraged Muslims to worship and perform religious rituals in this city especially in Masjid al-Haram. According to narrations from the Infallibles (a) the rewards of one rak'at (unit) of prayer in Masjid al-Haram is equal to praying hundred thousand rak'ats (units) of prayers in other mosques.[19] This city is referred to as Haram (shrine) of God, his Prophet (s) and 'Ali b. Abi Talib (a).[20]

Masjid al-Haram (or Al-Masjid al-Haram) is the most famous and the holiest mosque for Muslims which is located in Mecca in Arabia. It is regarded as the Qibla of Muslims. Masjid al-Haram includes a number of holy places and things including Ka'ba, Hajar al-Aswad, Multazam, Mustajar, Hatim and Hijr of Isma'il which are highly respected by Muslims. In addition to general religious rules about mosques, in Islamic fiqh, there are exclusive religious rules about Majid al-Haram. It is obligatory for Mustati' (financially capabale) Muslims to make a pilgrimage to Mecca and perform Hajj at least once in their lifetime. Some of its rituals are performed in Masjid al-Haram.

Ka'ba is the Qibla of Muslims and is the most important place for worship among Muslims. According to religious narrations and the Holy Quran, Prophet Ibrahim (a) and his son, Isma'il built Ka'ba by the order of God. The Qibla of Muslims was changed in the second year after Bi'tha from al-Aqsa Mosque to Ka'ba.[21]

Muzdalifa or Mash'ar is a region between 'Arafat and Mina and staying there on the morning of Eid al-Adha is one of the essentials of Hajj. Most hajj pilgrims collect stones for Ramy al-Jamarat from Muzdalifa.

Mina is a place where Hajj pilgrims stay from the tenth until the twelfth of Dhu l-Hijja. They also perform some rituals of Hajj in this land including Ramy al-Jamarat, Sacrificing, Halq or Taqsir and Baytuta (stay at night). Shrines between Mecca and Medina 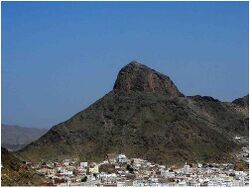 The Situation of Shi'ite Muslims in Mecca 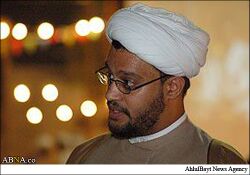 Appearance of the local autonomous Shi'ite rule of Banu al-Hasan over Mecca perfectly shows the situation of Shi'ism in this city.[36] In 10/631. Mecca was the center of Shi'ism as Ibn Hajar al-Haytami stated that his purpose in writing al-Sawa'iq al-muhrriqa was expansion and growth of Shi'ite Muslims in Mecca.[37] Ibn Jubayr (b. 540/1145 - d. 614/1217) stated in his travel account that in his journey to Mecca, the Emir of the city declared the start of Ramadan month based on religious rules of Alavi Shi'ites.[38] He has also stated that a special place was given to Zaydiyya Shi'ites in Masjid al-Haram for performing congregational prayers. Ibn Jubayr also called Sharifs of Mecca Zaydiyya who recited the verse "Hayya 'ala Khayr al-'Amal" in their Adhan.[39] Some travel accounts stated that the influence of Shi'ites declined in the next centuries in Mecca. Muhammad Husayn Farahani who performed Hajj in 1302/1885 said that the number of Shi'ite Muslims in mecca were very few who mostly worked as guides for Hajj pilgrims.[40] Ayazkhan Qashqai who visited Mecca in 1341/1923 stated that Shi'ites did not need to exercise Taqiyya (precautionary dissimulation) in order to perform their religious rituals in Jeddah, Mecca and Medina; they could freely express their religious affiliation as well.[41]

Sharifs of Mecca officially supported Zaydiyya at least until early 15th century.[42] A number of travel account writers stated that Sharifs were Shi'ites but they hid their religion.[43] Due to tensions posed from Mamluk rulers, Sharifs of Mecca were forced to become Shafi'i Muslims by which they completely separated from Zaydiyya.[44] However, some sources stated that they always wanted to treat Shi'ites with tolerance and peace until the end of their rule.[45]

When Al Saud came to power, Shi'ites who were limited and scattered in Mecca were put under huge pressure and religious restrictions. Wahhabi muftis also issued fatwas by which the life and properties of Shi'ites were put at risk. Gradually they were forced to exercise Taqiyya especially in Mecca where Shi'ites performed their religious rituals at home and behind closed doors while they acted as Sunni Muslims in public.[46]

With constant growth in the number of Hajj pilgrims in Mecca, new hotels were built around Masjid al-Haram. For example now it is expected that twenty six hotels to be built with thirteen thousand rooms which will increase the capacity of city for pilgrims. Also the first phase of monorail on the way of Mecca to Mina, 'Arafat and Muzdalifa has started in 2010. The Clock Tower is one of the new structures in Mecca which is the biggest clock tower in the world with four clock faces. Construction of such high buildings around Masjid al-Haram have been criticized in the world of Islam, as they believe such buildings are disrespectful to Ka'ba and Masjid al-Haram.[48]

In the late 2011 a new expansion plan of Masjid al-Haram started in order to add more mataf (circumambulation areas) spaces in two floors around Ka'ba to accommodate more pilgrims for Tawaf. Its first floor is three to four meters high and the second floor is thirteen meters high. Building of such structures have brought new fiqh issues about Tawaf. According to Shi'ite faqihs, performing Tawaf in the first floor is right, but some believe only those with difficulties and disabilities are allowed to perform Tawaf in the second floor of Masjid al-Haram.[49]