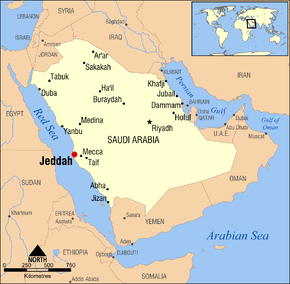 Jeddah on the map of Saudi Arabia.

Juddah or Jeddah (Arabic: جدة) is the most important city and port in Saudi Arabia near the Red Sea. It is a business center and the second largest city of the country, after Riyadh, with a population of over 3,000,000 people.

It is said that the history of the city goes back to the Stone Age. According to some accounts, Arabs and some Iranians were the main residents of Jeddah. After the emergence of Islam, the city was ruled by the Umayyads, the Abbasids, the Fatimids, the Ottomans and the Wahhabis. The city is known as the Bride of the Red Sea. It is the point of entry for pilgrims of hajj. In recent centuries, many Iranian Shiites arrive in this city first when they go to the hajj pilgrimage, and then they go to Mecca. Iranian governments, such as the Qajar government, had an official consulate in Jeddah in order to take care of Iranian pilgrims.

The Meaning of Jeddah

Some people take "Jeddah" to mean line or road and seaside (or riverside), and some believe that Jeddah is called so because it was on the seaside, and Mecca was connected to cities on the other side of the sea through Jeddah. Some people take the term to be an Arabic form for the Nabataean term, Kidd. There are some myths that since the resting place of Eve—the mother of all human beings—is located in this city, or the city is where she fell from Eden, it is called so (since the word, "jadda", in Arabic, means grandmother). Others take the name to come from its adjacent sea (Jeddah sea).

Today people in Saudi Arabia pronounce it as Jidda.

Jeddah is located near the seaside plain, Tihamah, 75 kilometers west of Mecca in the western part of Saudi Arabia. A chain of foothills parallel to the mountain range of Hijaz separates it from the Eastern part. The city is 419 kilometers away from Medina and covers an area of 47,000 hectares (470 square kilometers).

Jeddah's weather is affected by its location. Since the sea temperature is high during the summer, the humidity rises, and the weather rises to 50 degrees centigrade.

The Origin and History

It is said that the history of Jeddah goes back to the Stone Age. On some accounts, Quda'a, an old Arab tribe, were the first people who settled in Jeddah. And on other accounts, during the Jahiliyya period, 'Amr b. Luhay who changed the monotheistic approach in Mecca, took some idols from Jeddah to Mecca, and called people to worship them.

However, there are other accounts that Salman al-Farsi's Iranian kinsmen who were businessmen resided in Jeddah when they converted to Islam, or the city was built by a Sassanid monarch. According to Iranian accounts, when Bandar Siraf was destroyed, some of its people moved to Jeddah and settled there. On these accounts, the main inhabitants of Jeddah were Iranians.

Persian merchants tried to construct Jeddah. Iranian monarchs had Iranian merchants who came from other countries reside there. In fact, Jeddah was the anchorage point of ships from India, Aden, and Yemen.

When the Sassanids lost their power, Jeddah was abandoned such that during the emergence of Islam, it turned into a small village around Hijaz. After the emergence of Islam in 26/646-7, 'Uthman b. 'Affan turned Jeddah into Mecca's port instead of Shu'aybiyya (a port south of Jeddah). After this, the city thrived again and became the center of the largest global market, especially during the hajj rituals.

Since it was located in the middle of ports in Hijaz and was close to Aden and India, it had a thriving business. In addition to Indochina, it had transactions with Egyptian ports such as 'Aydhab, Qaws, as well as European and North African cities, Morocco, and sometimes Andalusia. Grains, argricultual products and livestock were carried to Jeddah from which they were sent to Mecca to meet the needs of hajj pilgrims. They led to Jeddah remaining a commercial center for consecutive centuries.

Jeddah after the Emergence of Islam

Not much is known about the history of Jeddah in the first centuries after Hijra. On some accounts, during the Umayyads and Abbasids, the city was attacked by Abyssinians and Kurks or domestic rebels. For example, in 473/1080, merchants left Jeddah because the ruler of Mecca tried to seize their property and Arabs dominated the city.

The Period of the Fatimids

When Fatimids overtook the power in North Africa and dominated the Red Sea, instead of transactions with the Far East from ports in the Persian Gulf, such as Basra, they made transactions in the Red Sea, especially the Jeddah port. Thus they undermined the economy of the Abbasid caliphate.

Since 918/1512, when the Portuguese attacked Muslims' ships, Jeddah was also threatened and it was defended by Mamluks and then the Ottomans. In 917/1511, Husayn Kurdi, Jeddah's representative on behalf of Sultan Qansura al-Ghawri, built a fort around the city as a military base to attack the Portuguese. In 948/1541, Sharif Muhammad Abu Numay defeated Portuguese to occupy Jeddah in their last attempt to occupy Jeddah, and Sultan Sulaym al-Qanuni rewarded him with half of the tax incomes of Jeddah.

Under the Dominance of the Wahhabis

In 1217/1802, Wahhabis besieged Jeddah, but they could not take over the city because it was highly protected and fortified, until 1220/1805 when they attacked Jeddah and slaughtered many people in the city and pilgrims of the Ka'ba. Jeddah was occupied by the Wahhabis until 1226/1811.

Under the Dominance of the Ottomans

In 1811, Muhammad 'Ali Pasha extended the Ottoman dominance to Jeddah. In 1256/1840, Jeddah was directly ruled by the Ottomans; its ruler was appointed by them.

Part of the Saudi Government

Sharif Husayn, who fought for the independence of Arabs, saved Jeddah from the Ottomans. Since the Wahhabis occupied Mecca in order to dominate Hijaz in Rabi' I, 1343/October 1924, Jeddah was the center of Sharif Husayn's government. The city was under siege for one year and was finally dominated in Jumada II 1344/December 1925 by the Wahhabi ruler, 'Abd al-'Aziz b. Saud, and eventually the Saudi government was recognized under the Jeddah Treaty on Dhu l-Qa'da 1345/May 1927, and thus Jeddah was annexed to the Saudi realm.

In 1981, Jeddah had a population of 1,000,000 people and in 1999, the population was over 2,000,000 with a population growth of 16 percent. Later the population grew into 3,000,000 showing its economic progress and job opportunities. With the growth of the population, governmental and national schools, as well as centers for language learning, were founded. King Abdulaziz University in Jeddah is the third ranking university in Saudi Arabia with 10 faculties. There are six newspapers (two in English) and several weekly and monthly magazines in Jeddah.

The large population of the city and the number of hajj pilgrims have led to the increase of the activity in the 'Abdulaziz International Airport (founded in 1981) and the Jeddah Port. There are many roads in the city with 75 bridges that have facilitated communications. There are tens of governmental and private clinics and hospitals in Jeddah. There are large facilities to desalinate the sea water. The city is one of the largest industrial centers in Saudi Arabia. In addition to the refining installations, there are production lines for iron, steel, marble, cement, glass, paper, clothes and the like. Many industrial productions, on the one hand, and the ease of import and export, on the other hand, have improved commerce in Jeddah. Moreover, tourism has led to the development of a number of hotels. Iranian pilgrims of hajj amount to an annual population of 1,000,000. Before Riyadh was chosen as the capital city of Saudi Arabia, Jeddah was the center for the visit of foreign delegates. Jeddah is the center of the Organization of the Islamic Conference.

Some historical monuments of Jeddah, such as the grave attributed to Eve and the Fort built by Husayn Kurdi were destroyed during the Saudi period, respectively, in 1928 and 1948. There are hadiths attributed to the Prophet (s) mentioning the virtues of Jeddah or recommending worshipping there because Eve is buried there.

There were scholars who were born in Jeddah or lived there, including:

Since the early 11th/17th century, books were written about the history of Jeddah.