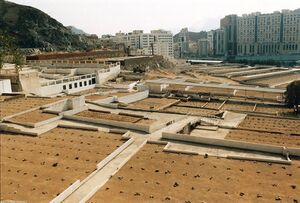 'Abd al-Muttalib, Khadija al-Kubra (a), Yasir and Sumayya (the first martyred Muslims) were buried in this cemetery. Therefore, after al-Baqi' Cemetery, al-Ma'lat is considered as the second most important cemetery among Muslims, especially Shi'ites, who perform hajj or visit Mecca and Medina.

In the Age of Ignorance and also early years after the emergence of Islam, this cemetery included Abi Dubb valley (right of the mountain) and Safi l-Sibbab valley (left of the mountain) which is extended to Adhakhir pass and the Khurman area.[2] Because it was located out of Mecca, geographers including al-Maqdisi and Ibn Khurdadbih did not mention this cemetery; Yaqut al-Hamawi[3] only discussed it in general. Therefore, specifying the exact size or borders of the cemetery would not be possible due to its neighboring al-'Ulya' Cemetery.[4]

The oldest documents on Mount al-Hajun goes back to the poems from Banu Jurhum,[5] however, probably after the burial of Qusayy b. Kilab, the fifth ancestor of Prophet Muhammad (s), as the first one who was buried in al-Hajun, it was called al-Hajun Cemetery.[6] Afterwards, people of Mecca buried their dead on the left and right valleys of al-Hajun.[7] Therefore, it became a famous cemetery at the time that Islam emerged in Mecca, especially because the ancestors of Prophet Muhammad (s) were buried there including 'Abd Manaf b. Qusay, Hashim and 'Abd al-Muttalib. Some narrations mentioned that Amina, Prophet's mother, was also buried there.[8] Abu Talib, Prophet Muhammad's uncle, praised this cemetery in a poem.[9]

Although notable companions of Prophet Muhammad (s) and Tabi'un were buried in this cemetery and the spiritual importance of the cemetery is mentioned, the identity and exact burial site of them are unknown.[10] However, al-Firuz Abadi in his treatise, Itharat al-Hajun li ziyarat al-Hujun, (in the 7th/13th century), mentioned the names of 38 men and women of sahaba who are buried in al-Hajun Cemetery.[11]

Other notable buried people are: 'Abd-Allah b. 'Umar b. al-Khattab; al-Fudayl b. 'Iyad (Muslim ascetic in 2nd/8th century); a number of Sayyids; descendants of Imam al-Hasan (a) and also al-Mansur, the Abbasid Caliph.[12]

Ibn Fahd, an author in the 9th/15th century, dedicated a part of his book on notable men and women of Mecca (including judges, hadith narrators, Quran reciters and respected people) who are buried in al-Hajun Cemetery, mostly in family graves.[13]

According to the reports of Husayni Farahani[15] (in 13th/19th century) and Ibrahim Raf'at Pasha (in 14th/20th century),[16] al-Hajun Cemetery was highly important among Muslims. The grave of Abu Talib is considered highly respected especially among Shi'a Muslims.

The most important gravestone in al-Ma'lat Cemetery belongs to Khadija al-Kubra (a), which was built with a high dome in the 8th/14th century.[17] This mausoleum was not demolished until 950/1543-4 and then Sultan Sulayman al-Qanuni, an Ottoman Emperor, rebuilt an Egyptian style mausoleum with a high dome on it. Prior to its reconstruction, it only had a wooden box on the grave. According to its inscription, it was rebuilt in 1298/1880-1.[18] As Husayni Farahani said,[19] its wooden darih was decorated and some people were taking care of the religious practices there. Al-Ma'lat Cemetery before demolition by Wahhabis

All the domes and mausoleums in al-Hajun Cemetery were demolished by Wahhabis in 1343/1924-5, after the demolition of Al-Baqi' Cemetery. This act irritated all Muslims.[31] Although Wahhabis tried to justify it with religious reasons and even rejecting the burial of the relatives of the Prophet Muhammad (s) in the cemetery,[32] however, it did not calm Muslims' anger.[33]

Al-Hajun Cemetery is surrounded by walls which extended to the slopes of Mount al-Hajun, but the northern part of the cemetery is not enclosed by walls. In addition, the cemetery is divided into two parts: the northern, which includes the graves of Banu Hashim and ancestors of Prophet Muhammad (s), and the southern.[34]

According to the stone inscription on the entrance of the cemetery, it was rebuilt in 1383/1963-4. Today Mount al-Hajun is getting bulldozed for expansion of the cemetery.[35]