Khaybar (Arabic: خیبر) is a region in Saudi Arabia where the battle of Khaybar took place. Khaybar is located 165 km from Medina and its center is the city of al-Shurayf. The inhabitants of Khaybar were Jewish in the beginning of Islam. According to Muslim historians, the Prophet (s) fought them because they incited the rulers of Mecca to attack the Muslims.

The Khaybar region consisted of several forts, and some have said that this is why it was called Khaybar (fort). In the battle of Khaybar, which took place in 7 AH/628, the Muslims conquered the forts of Khaybar. Some of the forts were conquered by Imam Ali (a). After the war, the Jews were not expelled from the area, but it was decided that they pay half of their agricultural produce to the Muslims.

According to historical sources, the Jews lived in the area until the time of Umar b. al-Khattab, the second caliph, when he forced them to leave the area. 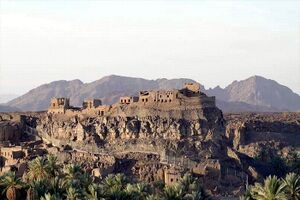 Yaqut Hamawi mentioned seven forts in this area,[4] al-Ya'qubi named six forts,[5] and the book Tarikh-i Payambar-i Islam (s), written by Ibrahim Ayati, reported the conquest of ten castles in the battle of Khaybar by Muslims.[6]

Khaybar region is located in Saudi Arabia and north of Medina and is about 165 km away from Medina. Its center is the city of al-Shurayf.[7] According to Yaqut al-Hamawi, in the past, Khaybar was eight stations[8] or five days[9] away from Medina. Khaybar is known as a fertile region with many springs, fields and palm trees.[10] 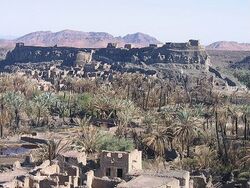 A view of Khaybar district

During the Muslim war with the people of Khaybar, known as the battle of Khaybar, the inhabitants of this area were Jews. It was considered difficult to determine the time of the arrival of the Jews in this area. Some reports indicate that the Romans invaded Palestine and the Jews entered the Khaybar region. Some say that Jews had already migrated to the area during the Babylonian rule over Jerusalem.[11]

After the victory of the Muslims in the battle of Khaybar, the estates of this region were held by the Muslims as booty; but, at the request of the Jews living in Khaybar, the Prophet (s) allowed them to stay in Khaybar, provided they paid half of their agricultural produce to Muslims.[12]

According to historians, the Jews lived in Khaybar until the time of the second caliph, Umar b. al-Khattab, when he forced them to emigrate, citing a narration attributed to the Prophet (s) suggesting that no two religions can remain at once in the Arabian Peninsula.[13]

The battle of Khaybar

In 7 AH/628, the Prophet of Islam (s) attacked Khaybar with an army.[14] In this battle, the Muslims conquered the forts of Khaybar and won.[15] This war was called the battle of Khaybar.[16] Historians considered the cause of the war due to the fact that the Jews of Banu Nadir, who were expelled from Medina to Khaybar after plotting for the assassination of the Prophet (s), incited the rulers of Mecca to fight against the Muslims.[17]

According to Ibn Hisham, a historian of the 3rd/9th century, in the conquest of one of the forts of Khaybar, the Prophet (s) handed over the flag of his army to Abu Bakr and then to ‘Umar b. al-Khattab; but both returned without victory. Then, he (s) handed the flag to Imam Ali (a) and promised that the castle would be conquered by him and he (a) conquered the castle.[18]