Palestine (Arabic: فلسطین) is a Muslim country where al-Aqsa Mosque is located. Palestine is a neighbor of Lebanon, Jordan, Syria and Egypt. The capital of Palestine is Jerusalem al-Quds and the cities of Jericho and Gaza located there are considered among the oldest cities of the world.

Like other countries, it has political parties, the most important ones of which are Hamas, Islamic Jihad Movement and Fatah. Sabirun Movement, and Shaqaqi assembly are among Shi'a Palestinian groups.

Shi'a have been among the inhabitants of Palestine and are still living there. However reliable statistics and online estimates indicate that they do not present a substantial size compared to other existing communities.

Palestine is located in the east coast of the Mediterranean Sea. It neighbors Syria and Jordan in the east, Lebanon and partly Syria in the north and Egypt in the south. The area of Palestine is more than 27000 square kilometers.[1] In the past, the south west of Syria was called Palestine; but, the borders of the present land of Palestine were demarcated after its occupation by Britain.[2]

Palestine has a mild and Mediterranean climate which is appropriate for living.[3] In the past, Palestine was considered a part of Syria; therefore, it was called "Southern Syria" among Arabs.[4]

The first city of Palestine was Ariha which was built in 8000 BC.[5] After the immigration of Arabs to Palestine around the year 2500 BC, many cities and regions were developed including Beit She'an, Ashkelon, Acre, Haifa, Hebron, Bethlehem and Gaza.[6] Cities of Ariha and Gaza are considered among the oldest cities of the world.[7]

Jerusalem al-Quds, the present capital of Palestine, is the most important city of this country.[13] It has been the birthplace of Christianity and Judaism. Also, the existence of al-Aqsa Mosque in this city as the first qibla of Muslims and the place where the Prophet Muhammad (s) ascended to the skies has made Jerusalem al-Quds very important to Muslims. Other important sites in Jerusalem al-Quds are: Qubbat al-Sakhrah, David's (a) Tomb, Position of Prophet Moses (a).[14]

According to historians, Palestine was a living place for humans since Stone Age.[15] Palestine has faced different stages of the development of human life from the ages of immigration to agriculture. The oldest known name of Palestine is Canaan; because, the first immigrants to Palestine were Canaanite Arabs[16] who immigrated to Palestine 3500 BC.[17] But, the name Palestine is adopted from immigrant tribes who immigrated from the west of Asia to this land about 1200 BC.[18]

After Abraham (a), his son, Ishaq (a), and then his grandson Jacob (a) lived in Palestine; but the children of Jacob (a) immigrated to Egypt. After Moses (a) passed away, descendants of Jacob (a) known as Banu Israel returned to Palestine led by Joshua (a). Then, chaos took over Palestine and remained until the time of Talut. Then, Prophet David (a) succeeded Talut. David (a) dominated over all Palestine and chose Jerusalem as the capital of his government around 1000 BC. After David (a), his son, Solomon (a) became the king and then Palestine was greatly developed. During many centuries, most of the inhabitants of Palestine were Canaanite Arabs and were gradually mixed with other Arab tribes. Also in some periods, Jews took the power in some Palestinian regions;[20] but then in 63 BC, Romans took over Palestine and dominated Jews.[21] The prophethood of Jesus (a) began in 30 BC, and he (a) began his teachings in Jerusalem and guided people.[22]

Expansion of Islam into Palestine

Islam entered Palestine during the rule of Abu Bakr;[23] but, it was conquered in 13/634 at the time of the caliphate of Umar b. al-Khattab after some battles including the Battle of Ijnabayn led by Khalid b. al-Walid. According to some sources, in the Battle of Ijnabayn about three thousand people were killed.[24]

From the Conquest of Muslims until its Occupation by Jews 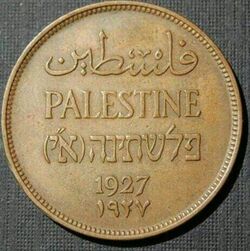 A Palestinian coin in the time of Britain mandate

Occupation of Palestine by Israel

In 1799, Napoleon Bonaparte was the first European leader who summoned Jews to establish a Jewish country in Palestine. Many years later in 1897, the first Zionist congress was held in Switzerland and a decision was made to follow a purposeful policy toward Judaization of Palestine. In order to desensitize the issue, they used the title "Jewish homeland" instead of "Jewish state".[32] But, after thirty years and at the beginning of the World War I, one percent of Jews supported this plan and it failed in practice.[33] At that time, only eight percent of the population of Palestine were Jews and regarding the area, only two percent of all Palestine was in their control.[34] The happening of World War I led to issuance of Balfour Declaration in 1917. In this declaration, Britain demanded the establishment of a Jewish homeland in Palestine.[35] Therefore, during the control of Britain over Palestine a great population of Zionists immigrated to Palestine,[36] so that the number of Jews in this period increased six times.[37]

With the occupation of Palestine by Israel in 1948, there always existed struggles and fights between Palestine and Israel. These struggles are called Palestine-Israel struggle.[43] Many states were sensitive toward this, but recently the struggle is attracted less attention of governments due to different political, economic and security reasons. However, the issue of Palestine has been notably supported by Shi'a; and the fatwas of many Shi'a scholars in this regard show support for Palestinians.[44]

One of the most important supports for Palestine by Shi'a was naming al-Quds Day by Imam Khomeini. Imam Khomeini, the former leader of the Islamic Republic of Iran, named the last Friday of the month of Ramadan, al-Quds day in support of the Palestinians. Every year in many countries of the world such as Iraq, Iran, India and Malaysia great demonstrations are held in support of Palestinians on al-Quds day.[45]

During the years of the occupation of Palestine, it faced several uprisings of Palestinians. These uprisings were called "intifadas". The first uprising of Palestinians was made in 1976 called Intifada of the Earth Day. Another Intifada happened in 1987 which was called "the First Intifada" or "Intifada of Palestinian Nation". This intifada happened in the West Bank and Gaza. Another intifada was Intifada al-Aqsa. This Intifada began in 2000 because of entering Ariel Sharon, the prime minister of Israel, to al-Aqsa Mosque. One of the most important slogans of Intifada al-Aqsa was the establishment of a Palestinian government and disengagement of the West Bank by occupants.[48]

According to historical sources, residents of Palestine are two groups of Arabs and Jews. Arabs include Muslims, Christians and other groups.

According to statistics, the population of Arabs in Palestine was about 1,600,000 people in 1948, of which 88.5 percent were Muslims, 10.4 percent were Christians and 1.1 percent were other groups.[51] After Arab–Israeli War in 1949, Arabs of Palestine were divided into four groups:

In 1948, about half of Arabs of Palestine were exiled from the regions later called Israel and were forced to immigrate to the West Bank, Gaza, Jordan, Syria, Lebanon, Egypt and Iraq.[53] According to statistics, in that year, remaining Arabs in Palestine comprised fourteen percent of the whole population of Palestine.[54] According to statistics in 2002, the population of all Palestinians was eight million people, fifty two percent of whom were refugees to other countries.[55]

In 1914, from all the people living in Palestine, about eight percent were Jews; but this proportion was increased to thirty percent in 1943. In 1948 and after the occupation of Palestine, Jews comprised most of the population of this land.[56]

Like many other countries, Palestine has different political parties, some of the most famous ones of which are Muslim Brotherhood, Hamas, Islamic Jihad movement and the Palestinian National Liberation Movement (Fatah).

Resistance Movement of Palestine (Hamas) is the most prominent Islamic resistance movement of Palestine. This movement is the continuation of Muslim Brotherhood movement. Hamas movement set the priority of its activities on educating people, family and the society in order to prepare the grounds for the establishment of the Islamic state in Palestine. At the beginning of its establishment, Hamas did not have an idea for resisting the occupation of Palestine, but later engaged in armed fight.[58]

Palestinian National Liberation Movement is the oldest political party in Palestine. This movement was established in 1965. Most officials of the state of Palestine are members of this party.[60]

Status of Palestine in the World of Islam

Palestine has a special status before Muslims due to different reasons including the existence of al-Aqsa Mosque there.[61] The Prophet Muhammad (s) chose al-Aqsa Mosque as the first Qibla for Muslims.[62] According to some exegetes, Jerusalem al-Quds is implicitly mentioned in the Qur'an. Also, many hadiths from the Prophet (s) and Imam Ali (a) are transmitted about the merits of the city.[63] Palestine is generally mentioned in the Qur'an as "Ard Muqaddasa" (the Holy Land) and "Ard Mubaraka" (the Blessed Land). Palestine was the place of the prophethood of many prophets and the burial place of many divine prophets. Palestine was the place of ascent of the Prophet (s).[64]

Palestine, the Land of Ascent

Al-Aqsa Mosque is the place of Prophet Muhammad's (s) ascent through the skies.[65] During the rule of Abd al-Malik b. Marwan, a mosque was built upon the rock from where the Prophet (s) ascended to the skies and it was called Qubbat al-Sakhra (the Dome of the Rock).[66]

The presence of Shi'a in Palestine dates back to the early Islam and the presence of Abu Dhar al-Ghifari in Syria.[67] Muqaddasi in Ahsan al-taqasim and Nasir Khusraw in Safar bi aramgah-i Abu Hurayra[68] reported that once Shi'a comprised most of the population of Palestine.

Shi'a school of thought was spread in Palestine in the fourth/tenth century, during the rule of Fatimids.[69] Al-Hakim bi Amr Allah, the sixth ruler of Fatimids established Dar al-Ilm Fatimi in Jerusalem. It had a great influence in spreading Shi'a in Palestine and continued its activity until the occupation of Palestine by Crusaders.[70] Despite the crusades and after it, the dominance of the Sunni Salah al-Din Ayyubi over Palestine and Syria, Shi'a remained in Palestine. During the rule of Ottomans, Shi'a became influential once again.[71]

During the history, Shi'a of Palestine have been harassed a lot. The first suppression of Shi'a of Palestine was made by Salah al-Din Ayyubi. After the growth of Shi'a in Ottoman era, Ahmad Pasha fought them for ten years and burned their books.[74] In 2010, security service of Hamas arrested tens of Shi'a converts. On the other hand, the group Ibn Bar al-Khayriyya al-Islamiyya in Gaza has focused on fighting the spread of Shi'a. Also, a movement is established in Gaza called jihad Salafi, the main goal of which is fighting Shi'a.[75]

Islamic Jihad movement is known as the flag bearer of Shi'a in Palestine. The founder of this movement was Fathi Shaqaqi. He was influenced by Shi'a; therefore, the Islamic Jihad movement is known as the symbol of Shi'a in Palestine.[76] A group is formed in Palestine called Sabirun movement. This group was branched from the Islamic Jihad movement and is close to Shi'a. Sabirun movement began its activity in 2014 with the leadership of Hisham Salim. Supreme Shi'a Council of Palestine is among other Shi'a Palestinian groups.[77] This group was established by Muhammad Abd al-Fattah Ghawanima in 2006.[78] One of the most important Shi'a assemblies of Palestine is Shaqaqi assembly. This assembly is a nonpolitical charity which tries to have an equal view towards all Islamic schools.[79]