Masjid al-Aqṣā, or al-Aqṣā Mosque (Arabic: المسجد الأقصی), is a mosque in Jerusalem al-Quds and was the first Qibla of Muslims. According to hadiths, it was the place where the Prophet Muhammad (s)'s Mi'raj or Ascension began. It is mentioned in the Qur'an, Sura al-Isra', in the story of Mi'raj. Masjid al-Aqsa is respected by Muslims, Jews, and Christians. In hadiths, it is characterized as a virtuous mosque along with Masjid al-Haram and Masjid al-Nabi, such that saying one prayer therein equals the saying of one thousand prayers in other mosques.

The building known today as Masjid al-Aqsa was constructed in the period of 'Abd al-Malik b. Marwan in the 1st century, and was reconstructed and repaired in different periods.

"Majid al-Aqsa" literally means the farthest mosque. It refers to a mosque in Jerusalem in Palestine, located on the southeastern part of the city,[1] 500 meters from the Dome of the Rock (Masjid al-Sakhra). It is called "Majid al-Aqsa" because it was very far from Mecca and Masjid al-Haram where the Prophet (s) and Muslims lived at the time.[2]

Others claim that a construction called "Masjid al-Aqsa" today did not exist at the time of the Prophet's Ascension, and thus, the word, "masjid" in the Qur'an should be taken in its general meaning of a place of worship.[7]

Today, "Masjid al-Aqsa" or the "Roofed Masjid al-Aqsa" refer to an independent building constructed in the period of 'Abd al-Malik b. Marwan around the sacred shrine, and the area including this mosque as well as Masjid al-Sakhra, Masjid 'Umar,[8] Buraq Wall, [9]. and so on.

Masjid al-Aqsa is highly respected by Muslims, Christians, and Jews. For Jews, Solomon's Temple lies beneath al-Aqsa Mosque.[10] Muslims believe that it was the place where the Prophet Muhammad (s) began his Ascension.[11] Moreover, it was their Qibla before the redirection of Qibla in 2/8 century.[12] Thus, some Iranian Shi'as in Qajar and Pahlavi periods visited religious places of Jerusalem al-Quds, including al-Aqsa Mosque, during their Hajj pilgrimages.[13]

In some Shiite hadiths, the Mosque of Kufa is said to be superior to Masjid al-Aqsa.[17]

Allegedly, the Prophet David (a) constructed a temple in the present location of Masjid al-Aqsa complex, which was later completed by Prophet Solomon (a). It is referred to as Solomon's Temple, Temple of Jerusalem, Temple of Elia, and the Dome of Elia. According to Gustave Le Bon, a historian of 19th and 20th centuries, prior to the conquest of Jerusalem by Muslims, there was a Church in Masjid al-Aqsa complex in the name of lady Mary (a).[18]

According to documents remaining from the first century, the present building of Masjid al-Aqsa was constructed in the Umayyad period in the first/seventh century.[19] According to Ibn Kathir, an 8th/14th century historian, the construction began in 66 at the command of 'Abd al-Malik b. Marwan (reign: 65-86), and ended in 73.[20] The construction was also attributed to Walid b. 'Abd al-Malik (reign: 86-96).[21]

According to Ibn Kathir, 'Abd al-Malik constructed Masjid al-Aqsa and its surrounding buildings in order to deter people of the Levant from going to the Hajj pilgrimage and encourage them to circumambulate around al-Aqsa Mosque,[22] because 'Abd Allah b. Zubayr siezed the opportunity of Hajj to propagandize against 'Abd al-Malik and gain pilgrims' pledges of allegiance for himself.[23] And on days of 'Arafa and Mina, he reminded people of the Prophet's cursing of al-Hakam b. 'As, the grandfather of 'Abd al-Malik and his household, in order to attract the support of people of Levant for his own rule.[24]

The building of al-Aqsa Mosque is rectangular, with a length of 80 meters and a width of 55 meters.[25] It is founded upon 53 marble pillars and 49 foundations.[26] The mosque has a huge portico with a dome over its middle part.[27] Nasir Khusrow (394-481), a 5th century tourist who visited Jerusalem in 438,[28] describes Masjid al-Aqsa in his travel book, talking about servants in the mosque.[29]

The building of al-Aqsa Mosque was repaired and reconstructed in different periods by different dynasties, including 'Abbasids, Fatimids, Ayyubids, and Ottomans.

Abbasid caliphs, Mansur al-Dawaniqi[30] (reign: 136-158) and Mahdi al-'Abbasi (126-169), repaired and reconstructed the building after it was damaged by an earthquake.[31] Moreover, as implied by an inscription, a dome was built for al-Aqsa Mosque in 426 by a Fatimid caliph, al-Zahir li-'Izaz Din Allah.[32] And in 458, the northern iwan of the mosque was reconstructed at the command of al-Mustansir li-Din Allah.[33]

In 1099, Crusaders conquered Jerusalem and built a church in one part of the mosque, and transformed the other part into a resting place for the cavalry and a storage for their provisions.[34] In 589, Salah al-Din Ayyubi reclaimed Jerusalem from crusaders, reconstructed the mosque, tiled its dome, and placed a wooden minbar in it.[35] Mamluks and Ottomans also reconstructed the mosque.[36]

Judaization of the Mosque 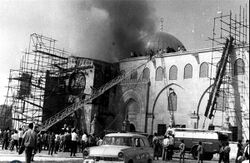 The Jews believe that remnants of Solomon's Temple lie beneath al-Aqsa Mosque. Thus, some of them try to demolish the mosque and revive Solomon's temple.[37] Some Christians allegedly believe that a precondition for the reappearance of the Christ is the demolition of Masjid al-Aqsa and the construction of Solomon's third temple.[38] Thus, Israeli forces prevent Muslims from entering the mosque.[39] Masjid al-Aqsa is deemed a symbol for the Islamic identity in Jerusalem as against Israeli Regime.[40]

On August 21, 1969, a Jew called Denis Michael Rohan set fire to al-Aqsa Mosque, which damaged parts of the mosque and led to the collapse of its roof. The old minbar in the mosque which dated back to 583 was burned in fire.[41] In the official calendar of the Islamic Republic of Iran, the anniversary of al-Aqsa Mosque conflagration on August 21 (Mordad 31) is known as the World Day of Mosque.[42]