History and the Founder

According to some reports, the first foundation of Imam al-Hasan al-'Askari (a) mosque was built by the order of Imam al-'Askari (a) and by the efforts of his agent, Ahmad b. Ishaq al-Qummi. Some believe that it was built in the place of another mosque which was called Jami'-i 'Atiq in the past. However in Tarikh-i Qom, there is no mention of this mosque and its attribution to Imam al-'Askari (a) instead the 'Atiq mosque is mentioned.

On December 13th, 1976, Imam mosque was registered no. 1312 among national heritage sites.

Imam al-Hasan al-Askari (a) mosque is located near Alikhani bridge. The building includes a porch, portal, courtyard, southern loggia, hall, basement and four halls on the four sides of the courtyards. In reconstruction of the mosque by the office of Ayatullah Safi two other halls were added to the mosque; one of them is 2900 square meters on the ground floor. It has a dome with 35 meters height and minarets with the height of 59 square meters and the whole Qur'an is written on the tiles of its walls. The other hall is the basement of the mentioned hall with 2700 square meters.

Imam al-Hasan al-Askari (a) mosque was originally 4170 square meters. 3190 meters of it was roofed and was comprised of halls and 1520 square meters of the area was outdoors. In the reconstruction of the mosque by Ayatullah Safi Gulpayigani, about 25 thousand square meters were added to it. 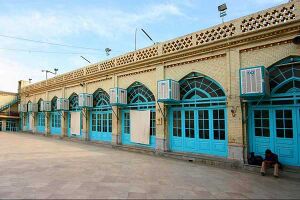 Courtyard and eastern hall of the Mosque 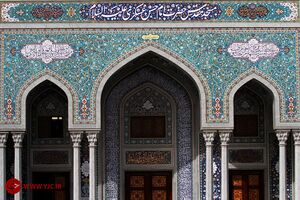 Tiling on the portal of the recently built parts

The importance of this mosque is because of its history and its attribution to Imam al-'Askari (a). The mosque is near the shrine of Fatima al-Ma'suma (a) and since the 9th/15th century, the chairmen of the shrine of Lady Ma'suma (a) also managed Imam al-Hasan's (a) mosque. This mosque has been the place for holding the classes and i'tikaf of some great scholars of Qom.

Halls of the mosque have been the place for teaching some of the scholars of the seminary of Qom. Al-Sayyid Rida al-Sadr taught and led the congregational prayer in one of the hall of the mosque for 16 years. Also, the class of Mirza Abu l-Fadl Zahidi (d. 1398/1978) was held in this mosque.

Imam al-Hasan al-'Askari (a) mosque is among the places for i'tikaf in Qom and the i'tikaf office of Qom is there. It is said that i'tikaf was held in Qom for the first time in this mosque by Ayatullah Ha'iri. Ayatullah Gulpayigani too used to hold i'tikaf in this mosque.

Holding Congregational Prayer and the Leaders of Prayers