Aʿzam mosque (Persian: مسجد اعظم) in Qom is one of the greatest mosques of Shi'ite Muslims which is located near the holy shrine of Lady Fatima al-Ma'suma (a). The most crowded classes of seminary of Qom are held in this mosque. A'zam mosque was built with the support of Ayatollah Burujirdi and Husayn Lurzadeh was the architect of the mosque.

Many significant political events took place in A'zam mosque including the speech of Imam Khomeini in 1964. This mosque is regarded as an important place where Islamic teachings are taught and marja's hold their sessions there. In addition, congregational prayers, important religious ceremonies and funerals of grand religious scholars are generally held in A'zam mosque.

This mosque covers twelve thousand square meters, it has four large spaces, a courtyard, and a library. Ayatollah Burujirdi is buried in one of the entrances of this mosque.

Ayatollah Burujirdi told Muhammad Taqi Falsafi that he had planned to buy the houses neighboring west and southwest of the holy shrine of Lady Fatima al-Ma'suma (a) to build a huge mosque. Seminary of Qom, Astana square, and a courtyard were situated around the holy shrine, leaving only one side of the shrine with a dark guesthouse and old buildings that worried people.

Besides, there was not a suitable place for performing congregational prayers and holding religious ceremonies in the shrine; therefore, Ayatollah Burujirdi decided to build a grand mosque next to the shrine. As Muhammad Fadil Lankarani quoted, Ayatollah Burujirdi wanted to build a great mosque similar to Goharshad Mosque in Mashhad as he predicted Seminary of Qom would expand on the long run and it would need a large and suitable place to hold classes and what is better than a place near the holy shrine as a mosque.

On Dhu al-Qi'da 11, 1373/July 12th, 1954, concurrent with the anniversary of the birthday of Imam al-Rida (a), the building of A'zam Mosque started and it took six years to complete. Ayatollah Burujirdi paid a part of the expenses and people's charities paid the rest.

The mosque is built according to Islamic architecture. It has a giant dome with a diameter of thirty meters and its height from the roof is fifteen meters and from the ground is thirty-five meters. The mosque has two tall minarets with a height of twenty-five meters from the ground. A tower watch is located on the northern side which can be seen from all angles.

Concerning decoration, tiling, and Islamic artistic features, the A'zam mosque is quite an amazing example in the recent century. All the carpets in the mosque are woven in Kerman, particularly for the A'zam mosque. People, especially people in business, paid the expenses of this mosque. It is estimated that it cost sixty to one hundred billion Rials to build the mosque. 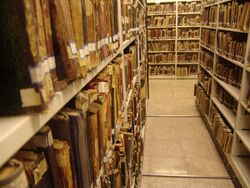 Manuscripts in the library of A'zam Mosque

The library was built on the western side of the mosque, which contains 7096 manuscripts, eight thousand lithographic copies, two hundred precious printed books and over 660 illustrated books as well as Manual of fatwas and textbooks of Qajar era. Today Sayyid Muhammad Jawad 'Alawi Burujirdi, a descendant of Ayatollah Burujirdi, is holding the library's trusteeship, which is administrated by Seminary of Qom. 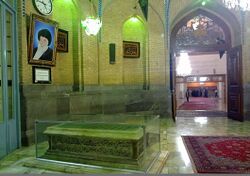 The Burial Place of Ayatollah Burujirdi

The grave of Ayatollah Burujirdi is located on the western side of the A'zam mosque. According to Muhammad Jawad 'Alawi Burujirdi, it was previously a sixty square meter house bought by Ayatollah Burujirdi; he specified his burial place and the rest of the house was dedicated to A'zam Mosque. He wanted to be buried in the hallway where pilgrims would pass to enter the holy shrine so that the dust of their shoes would lay on his grave.

Today, A'zm Mosque is the most important place where political and religious ceremonies are held in Qom; also, religious scholars' funerals are held there. Every year I'tikaf is performed in A'zam mosque in the months of Rajab and Ramadan.