Luṭf Allāh Ṣāfī Gulpāyigānī (Persian: لُطْف الله صافی گُلْپایِگانی, b. February 20, 1919 - d. February 1, 2022) was a Shiite marja' and a lecturer of advanced courses of jurisprudence and principles of jurisprudence in Qom. He was a prominent student of Ayatollah Burujirdi and a member of his istifta' council. He wrote the book, Muntakhab al-athar, concerning the Twelfth Imam (a) at the request of his teacher. He held political positions, including membership in the Assembly of Experts of the Constitution (to codify the Constitution of the Islamic Republic of Iran), as well as membership and secretaryship of the Guardian Council. He wrote as many as 80 books and essays in Persian and Arabic. Some of his books were awarded prizes, such as Wilayat Yearbook and Mahdawiyyat Yearbook.

Lutf Allah Safi was born in Golpayegan on Jumada I 19, 1337 (February 20, 1919).[1] He began his educations in Golpayegan and finished studying the intermediate level of Arabic literature, theology, the exegesis of the Qur'an, hadith, jurisprudence, and principles of jurisprudence in his hometown.[2]

Lutf Allah Safi Gulpayigani was a prominent student of Ayatollah Burujirdi. As a result of his remarkable scholarly achievements, Safi was assigned the task of replying to jurisprudential and theological questions and writing the book Muntakhab al-athar, by Ayatollah Burujirdi.[7] He was also a close consultant as well as a member of the istifta' council of Ayatollah Burujirdi. He taught and researched about jurisprudence, principles of jurisprudence, hadith, and rijal, and wrote books and essays on these issues. His scholarly character has been pointed out by prominent Shiite scholars, such as Sayyid Jamal al-Din Gulpayigani, Sayyid Husayn Tabataba'i Burujirdi, Imam Khomeini, and Sayyid Muhammad Rida Gulpayigani.[8]

Safi Gulpayigani was one of the few Shiite marja's who have had the experience of membership in the Assembly of Experts of the Constitution, as well as membership and secretaryship of the Guardian Council.

The Office of Ayatollah Safi Gulpayigani has established some educational and religious centers and institutes, including the Dar al-Zahra' Center for Islamic Researches in 2010 in Tehran to reply to people's questions about jurisprudential rulings, as well as to provide religious and family consultations.[14]

Ayatollah Safi Gulpayigani has been a prolific Shiite author. He has published over 80 books in Persian and Arabic. Some of his books have been translated into English and Urdu, and some of them were awarded Wilayat and Mahdawiyyat Yearbook prizes.[15].[16] Some of his essays, articles, and poems have also been published in different magazines, journals, and other media. 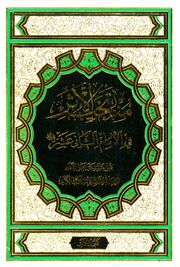 In addition to his published books, Lutf Allah Safi Gulpayigani has published miscellaneous articles and poems in different journals and magazines, such as an article in the journal of the Library of A'zam Mosque in Qom in 1965 about the Islamic government from a Quranic point of view, as well as poems published in 1390/1970 in the journal of Pasdar-i Islam.

Political and Social Views and Roles

Ayatollah Safi Gulpayigani is one of the few Shiite authorities who forbids all kinds of music.[27] He also expressed his positions on various social and political matters, and in some cases, he wrote letters to domestic and foreign officials. For example, in March 2011, he sent a message to King Abdullah of Saudi Arabia, asking him to leave the territories of Bahrain as soon as possible and apologize to the Muslim nation of Bahrain and all Muslims in the world.[28] Here are some other such cases:

On February 3, 2016, Ayatollah Safi Gulpayigani was honored[37] for his scholarly, religious, and Quranic activities[38] in a ceremony attended by the Speaker of the Islamic Consultative Assembly (Iranian Majlis), the head of Islamic seminaries, the secretary of the Higher Council of Islamic Seminaries, and some other officials and seminary figures.