He was an expert in Islamic jurisprudence, usul al-fiqh (principles of fiqh), Quranic exegesis, and Arabic lexicology. Ibn Idris is known for his extensive use of rational reasons in the deduction of the laws of sharia, his unorthodox fatwas, and his breaking the widely sanctified, uncriticizable picture of al-Shaykh al-Tusi. He brought Islamic jurisprudence to a new stage by opening the way to criticize al-Shaykh al-Tusi's views. He had a sharp tongue criticizing other scholars, and for this he was criticized by some scholars. His main masters are Abu l-Makarim b. Zuhra and Ibn Shahrashub, and people such as Ibn Nama and al-Muhaqqiq al-Hilli's father were his pupils. His well-known and influential work is al-Sara'ir.

His name was Muhammad and his kunya was Abu 'Abd Allah, and his titles were Fakhr al-Din and Shams al-Din. Ibn Idris is also called 'Ijili and Raba'i (attributed to Banu 'Ijil, a tribe tracing back to Bakr b. Wa'il from the Rabi'a branch).

Ibn Idris has mentioned his complete ancestral tree at the end of his manuscript of al-Shaykh al-Tusi's Misbah al-Mutahajjid, according to which his father's name was Mansur b. Ahmad b. Idris. Thus he came to be known by his paternal grandfather.

His most important masters in hadith are:

'Imad al-Din al-Tabari and Ilyas b. Ibrahim al-Ha'iri were people by the mediation of whom Ibn Idris has narrated hadiths (including al-Sahifa al-Sajjadiyya) from Abu 'Ali al-Tusi.

Here are some of Ibn Idris's pupils and people who have narrated hadiths from him:

His Influence on Islamic Jurisprudence

Ibn Idris's views in fiqh have always been cited in subsequent works in fiqh, and sometimes along with some jurisprudents of Hillah (called "Hilliyyun").

Views of Scholars about Ibn Idris

Sunni and Shiite scholars of fiqh and biographers have praised Ibn Idris for his knowledge of fiqh with expressions such as "unique in fiqh", "unique in his time", "researcher", and "the head of Shiism". He had correspondences with Sunni scholars about problems in fiqh.

Al-Muhaqqiq al-Hilli has sometimes referred to Ibn Idris as "a later scholar" and objected to his views. According to Khwansari, 'Allama al-Hilli has sarcastically referred to Ibn Idris as "luxuriant young man", which is disrespectful, but the source of such attribution is not known. Moreover, there are many cases where 'Allama al-Hilli cited and accepted Ibn Idris's views with respect.

According to Ibn Dawud al-Hilli, Ibn Idris rejected the reliance on hadiths from Ahl al-Bayt (a), and this is why he has considered him as an unreliable narrator of hadiths. Al-Bahrani has rejected the view, holding that the position of Ibn Idris was undeniable, and his blunders about some issues do not undermine his position. He believed that since Ibn Dawud al-Hilli has himself described Ibn Idris as the head of jurisprudents, he had better consider Ibn Idris to be a reliable narrator.

Ibn Idris and the Reliability of al-Khabar al-Wahid

Some people have claimed that Ibn Idris dismissed all hadiths as unreliable, but this is not true, since he takes al-khabar al-mutawatir (frequently narrated hadiths) as well as hadiths supported by evidence to be reliable, and he has only rejected al-khabar al-wahid (hadiths narrated by one or few narrators). The same view was also held by scholars before him, such as al-Sayyid al-Murtada 'Alam al-Huda, as well as scholars after him, such as Ibn Shahrashub, al-Tabrisi, and Ibn Zuhra; so this cannot undermine the reliability of Ibn Idris.

Though Ibn Idris did not appeal to al-khabar al-wahid in many cases and dismissed them as falling short of providing knowledge of the laws of sharia, his work is rife with hadiths he has made appeal to, since for him al-khabar al-wahid is reliable when it is supported by other sources such as the Quran, the Tradition, and consensus.

One consequence of denying the reliability of al-khabar al-wahid by Ibn Idris was that he relied more on the apparent meanings (or zawahir) of the Quran, the Tradition, consensus, and practical principles (al-usul al-'amaliyya).

According to Muntajab al-Din al-Razi, Shaykh Sadid al-Din Mahmud al-Himmisi (a scholar of fiqh contemporary with Ibn Idris) believed that Ibn Idris has made so many blunders that his narrations are not reliable. Other scholars agree with al-Himmisi, because, for instance, Ibn Idris has narrated a hadith from Aban b. Taghlib mediated by someone who is one or two generations later than Aban, or has considered Ahmad b. Muhammad b. al-Sayyar to be a companion of Imam al-Kazim (a) and Imam al-Rida (a), whereas he was a companion of Imam al-Hadi (a) and Imam al-Hasan al-'Askari (a).

However, it is said that his work is reliable unless there is evidence to the contrary.

Ibn Idris's most influential book is al-Sara'ir al-Hawi li tahrir al-fatawi, mostly known as al-Sara'ir, that covers all parts of fiqh (Islamic jurisprudence), such as worships, contracts, iqa'at (unilateral obligations), and the laws. The book was authored between 587 and 588/1191-1192. It was the most comprehensive book in fiqh, with respect to the number of its parts and chapters, written until that time.

The book has an addendum called "ziyadat" which came to be known as "Mustatrafat (that is, digressions of) al-Sara'ir", containing remarkable hadiths from early work, including unique hadiths as well. Mustatrafat al-Sara'ir has also been published independently in 1408/1987 in Qom.

Ibn Idris's purpose was to write a book on the basis of reasoning, without following other scholars, and without relying on al-khabar al-wahid. He cited and criticized the views of his contemporary scholars, to which some of them reacted sharply.

Other works by Ibn Idris include:

2. Al-Mukhtasar fi l-mudayaqa with the handwriting of Ja'far b. Ahmad al-Qamarwayh al-Ha'iri, Ibn Idris's pupil, in 588/1192. No copy of the book is available today, though it has been cited in some sources in fiqh.

4. Al-Masa'il which is an answer to some questions in Islamic jurisprudence, with the handwriting of Ja'far b. Ahmad al-Qamarwayh al-Ha'iri in 588 A.H. (1192). 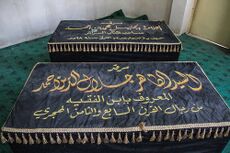 His grave in Hillah

According to some scholars, Ibn Idris died about 597/1200 and according to his son, Salih, he died about 598/1201. Therefore, it is not true that he was 25 or 35 years old when he died, as maintained by some scholars (based on the mistake that Ibn Idris died in 577/1181. This is incompatible with what Ibn Idris himself said about the date of writing al-Sara'ir and with the fact that his pupil, Fakhkhar, has heard a hadith from him in 593 /1196. Ibn Idris died in Hillah. His mausoleum is located in the "Jami'ayn" district in Hillah, and was reconstructed in 1340 SH/1961.