From wikishia
This article is about Ja'far b. Muhammad b. Qulawayh. For other people who named as Ibn Qulawayh, see Ibn Qulawayh (disambiguation).

Jaʿfar b. Muḥammad b. Jaʿfar b. Mūsā b. Masrūr b. Qūlawayh al-Qummī (Arabic: جَعفَر بن مُحَمَّد بن جَعفَر بن مُوسى بن مَسرور بن قُولَوَيه القُمّي) (d. 368/978-9) known as Ibn Qūlawayh (Arabic: ابن قولویه) is one the prominent shi'a hadith narrators in the fourth century/tenth century. He is one of the best students of Muhammad b. Ya'qub al-Kulayni and one of the most outstanding teachers of Al-Shaykh al-Mufid. He is one the jurists and theologians who tried to find a middle way between the viewpoints of ahl al-hadith and the scholars of 'ilm al-Kalam (theology). Ibn Qulawayh is the author of the book named Kamil al-ziyarat.

Ja'far b. Qulawayh was born in Qom and in a well-educated and virtuous family. He started learning knowledge from childhood by his father and brother who were the great shi'a hadith narrators.[1] According to the biographer’s narrations, his surname is 'Abu l-Qasim.[2]

He traveled to Egypt in 341/952-3.[3] It is narrated from Ibn Hajar al-Asqalani that Muhammad b. Sulaym al-Sabuni had narrated from him in Egypt.[4]

Ja'far b. Muhammad b. Qulawayh was one of the most distinctive scholarly figures of his time and his hadiths over thousands of years have been narrated and referred to in shi'a hadith sources. Shi'a scholars and jurisprudents have great regard for him and they rely on a large number of people who have narrated through Ibn Qulawayh.

Great Scholar's Views about Him

Al-Najashi one of the scholars of 'ilm al-Rijal says, "Ibn Qulawayh is higher than any beauty, knowledge and jurisprudence with which people are characterized."[5]

Al-Shaykh al-Tusi writes about him, "Abu l-Qasim Ja'far b. Muhammad b. Qulawayh al-Qummi is a reliable person and has a lot of books as many as the number of fiqh (jurisprudence) sections."[6]

Al-Allama al-Hilli narrates, "Abu l-Qasim had been one of the honorable and reliable companions in hadith and fiqh (jurisprudence)."[7]

Sayyid b. Tawus says about Ibn Qulawayh, "He is an honest narrator and all agree with his trustworthiness."[8]

Ibn Hajar al-Asqalani, who is one the Sunni 'Ulama, believes that he is one the famous Shi'a scholars and great people.[9]

He benefited from lots of great feature’s classes including:

A large number of great personalities has also benefited from him like: 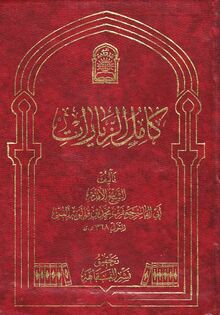 Ibn al-Qulawayh has a lot of books as follows:

Ibn al-Qulawayh passed away in 368/978-9 and was buried in Kadhimiya shrine beside Imam Musa b. Ja'far (a) and Imam al-Jawad (a)—beside al-Shaykh al-Mufid's tomb.[15] However, Afandi Isfahani believes that his tomb is in Qom.[16]