Abu ʿAbd Allāh Muḥammad b. Muḥammad b. al-Nuʿmān al-ʿUkbarī al-Baghdādī (Arabic: محمد بن محمد بن النُعمان العُکبَري البغدادي) (b. 336/948 or 338/950 - d. 413/1022) known as al-Shaykh al-Mufīd (Arabic: الشيخ المفيد) was among the greatest Twelver Shi'a scholars of the second half of the forth/tenth century and early fifth/eleventh century. He was among great revivers of Islamic sciences and among the hardworking preachers of Shi'a culture and jurisprudence. It is said by compiling the principles of jurisprudence, he founded a new approach in ijtihad which was a middle way between two other approaches namely extreme rational approach and hadith-based approach without applying the intellect.

In his childhood, Muhammad went to Baghdad with his father and began learning knowledge under great scholars of theology such as Abu 'Abd Allah al-Husayn b. Ali al-Basri known as al-Ju'al among the great teachers of Mu'tazilites of his time, who was famous in jurisprudence and theology and Abu Yasir, student of the famous scholar of theology, Abu al-Jaysh Muzaffar b. Muhammad al-Khurasani al-Balkhi who was apparently called al-Tahir. Following the advice of Abu Yasir, Muhammad attended the class of 'Ali b. 'Isa al-Rummani, the famous Mu'tazilite scholar.[6] After a debate between Muhammad and al-Rummani, when Muhammad won the debate, in a letter, al-Rummani recommended him to Abu 'Abd Allah al-Ju'al and titled him as "al-Mufid".

Two children have been mentioned for him in historical sources; a son named Abu l-Qasim Ali and an unnamed daughter who has been the wife of Abu Ya'la al-Ja'fari.

About the age of forty, he became the leader of Shi'a in jurisprudence, theology, and hadith and in defense of Shi'a, debated scholars of other sects.

The life of al-Shaykh al-Mufid was full of ups and downs, he was exiled from Baghdad three times in 392/1001-2 or 393/1002-3, 398/1007-8, and 409/1018-9. However, he had a high position before caliphs and his high influence in the society at his time can be understood by the cursing of him by Sunni biographers, especially al-Khatib al-Baghdadi. From his statement, it can be understood that many people became Shi'a because of him and this made disputant angry.

In religious conflicts at the time of al-Shaykh al-Mufid, Shi'a-resident areas of Baghdad such as Karkh and Bab al-Taq were set ablaze many times. In 361/971-2 (or 362/972-3), during the rule of 'Izz al-Dawla, due to bigotry of Hajib Sabuktagin, revolt and chaos erupted in Iraq and grew every day. At that time, Abu l-Fadl, the minister of 'Izz al-Dawla ordered the burning of Karkh. Karkh was an important part of Baghdad, its a Shi'a majority area and the biggest commercial center of Abbasids. In that accident, many people were burnt. In 363/973-4, Karkh was set on fire once again after religious struggles. Toward the last years of al-Shaykh al-Mufid's life, in 408/1017-8, al-Qadir, the Abasid caliph, supported by Mahmud of Ghazni, killed, exiled, and imprisoned many opposing religious groups including – according to Sunni historians –Rafidis. Al-Shaykh al-Mufid was the leader of Twelver Shi'a at such a difficult time.

Al-Mufid was extremely pious and had great spiritual attainments. He had many charitable activities. He was kind and humble. He prayed a lot, fasted, and wore old clothes, that he was even called Shaykh Mashayikh al-Sufiyya (the master of the masters of Sufis).[7]

Abu Ya'la al-Ja'fari, al-Shaykh al-Mufid's son-in-law, said, "He did not sleep but a part of night and then got up and prayed, studied, taught, or recited the Qur'an."[8]

It is reported that he memorized all the works of Shi'a's opponents so that he could answer their questions. In his house, sessions were held and scholars of different sects attended and al-Shaykh al-Mufid discussed with all of them. His wit, power in repartee, intelligence, perspicacity, sea of knowledge, sweet tongue, and his patience against enemies helped him debate scholars of the Mu'tazilite, Mujbira, Zaydiyya, Isma'iliyya, etc.[9]

In al-Fihrist, al-Shaykh al-Tusi says, "Muhammad b. Muhammad b. Nu'man al-Mufid, whose teknonym was Abu 'Abd Allah was known as Ibn al-Mu'allim. He was among Twelver Shi'a theologians who became their leader at his time and was a pioneer in knowledge and theology at his time and was also a pioneer in jurisprudence. He had a good mental power, quick insight, and witty, who had about 200 minor and major works."

Under Ibn al-Mu'allim, Ibn al-Nadim wrote that, "Abu 'Abd Allah has become the leader of Shi'a theologians in our time. He is ahead of his contemporaries in other sects in theology. He is quick in understanding and has a sharp insight. I have seen him and found him matchless."[10]

He also wrote, "Ibn al-Mu'allim, Abu 'Abd Allah Muhammad b. Muhammad b. al-Nu'man has become the leader of his companions and Shi'a in jurisprudence and theology in our time."

Establishing a New Approach in Jurisprudence

In Tarikh fiqh wa fuqaha, al-Gurji wrote, "Before al-Shaykh al-Mufid, jurisprudence was not as common among Shi'a scholars as it is now, but hadiths in jurisprudence which were narrated from Imams (a) were mentioned in books with their exact chain of reference and jurists did not make any modifications in the text of hadiths and even in narrating hadiths mentioned their chains of reference as well.[11] Later, this method was improved a little and jurists tried to mention their ideas in the extents of the hadiths and issue fatwa according to the justification and the subject. Al-Shara'i' written by Ibn Babawayh, and al-Shaykh al-Saduq's al-Muqni' and al-Hidaya were written using the mentioned approach. In this period, referring to the appearance of hadiths increased and benefiting from rationality was not very popular and this had made an obstacle on the way of the progress of sciences and scholars. After al-Shaykh al-Mufid, this serious obstacle was removed from the way of Shi'a scholars.

By his great knowledge, al-Shaykh al-Mufid stood against the dominant stagnation and established a new approach in jurisprudence based on regular principles and later his students, al-Sayyid al-Murtada and al-Shaykh al-Tusi continued his way. This approach in ijtihad, was a middle way between the approach of al-Shaykh al-Saduq in hadith and the analogical approach of Ibn al-Junayd in jurisprudence. He first compiled al-Tadhkira bi-usul al-fiqh for drawing out the rulings; then, al-Sayyid al-Murtada in al-Dhari'a and al-Shaykh al-Tusi in 'Uddat al-usul followed this initiative;[12] while, al-Shaykh al-Mufid himself was inspired by, Ibn Abi 'Aqil al-Ummani, for this approach.

Since al-Shaykh al-Mufid was living in an age when great scholars of different Islamic sects were living in Baghdad, the center of the Islamic government at that time, and gatherings of scholarly talks and discussion were common among them and such debates were mostly held before caliphs, naturally al-Shaykh al-Mufid attended there to defend Shi'a theological principles and debated with disputants and answered their questions.[14] These discussions were always held in a manner that they could remove the hate and enmity from the hearts of disputants, so that when al-Shaykh al-Mufid passed away, people of Baghdad including his followers and opponents were extremely sad and showed this sadness in their great participation in his funeral.

Regarding the social position of al-Shaykh al-Mufid among different Islamic sects, the opinions in jurisprudence and theology would be mentioned and thus naturally compared with each other and anyone who had an opinion would bring his justifications to convince others. In such an atmosphere, al-Shaykh al-Mufid showed a great role relying on Shia's stable principles and wrote the valuable book al-I'lam bi-ma ittafaqat 'alayh al-Imamiyya min al-ahkam in this regard and in fact, established the foundation of comparative jurisprudence. Later, this foundation was completed and promoted by Sayyid al-Murtada's al-Intisar, al-Shaykh al-Tusi's al-Khilaf and 'Allama's Tadhkirat al-fuqaha.

Al-Shaykh al-Mufid was among great revivers of Islamic sciences and hard-working promoters of Shia culture and Imamiyya jurisprudence.

Al-Mufid started his education in Baghdad by the time he was 11. According to A'yan al-Shi'a, He studied with 56 teachers, including Ibn Qulawayh (d. 368/978-9) in jurisprudence and hadith, and Abu l-Jaysh al-Balkhi (d. 367/977-8) in theology. Other teachers of his include,

Al-Mufid was the leading figure and spokesman of Twelver Shi'a in his time. Prominent students of his included:[15] 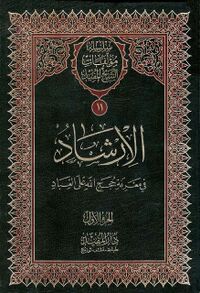 According to al-Fihrist of al-Najashi the works of al-Shaykh al-Mufid is 175 books and treatises.[17] Some of the most important of which are:

Al-Mufid died on the eve of Friday, Ramadan 3, 413/November 30,1022.[19] His student al-Sharif al-Murtada led his funeral prayer, in the presence of nearly eighty thousand people, a crowd never seen before in any funeral in Baghdad.

"The day of his death drew the largest crowd ever seen in any funeral, and both friends and foes wept uncontrollably".[20]